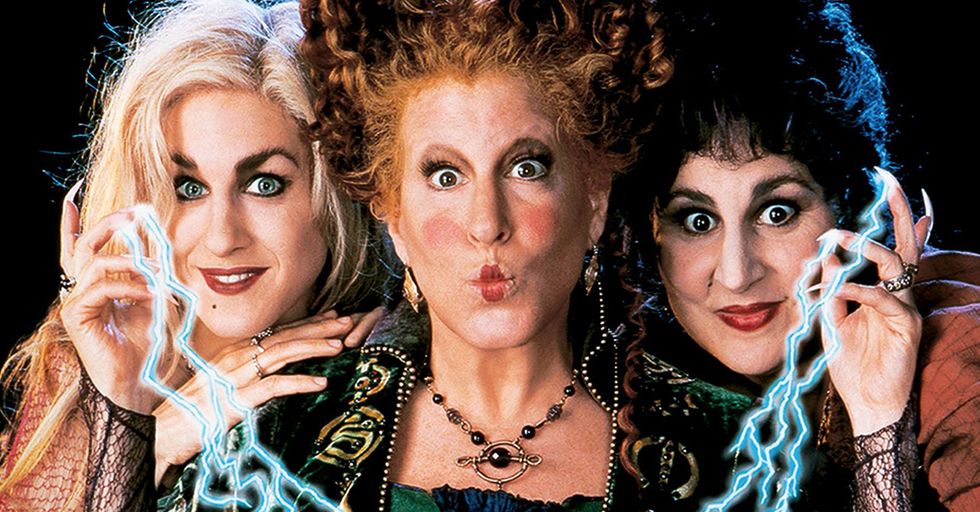 30 Perfect Movies to Put You in the Mood for Fall

It's September, and even though it might still be 90 degrees outside, it's fall inside our hearts. And one of the best ways to get in the spirit of the season is to light a candle, make yourself a mug of tea, curl up on the couch under a blanket, and watch a movie.

Here are the 30 best movies to watch during the fall.

Fall means October and October means Halloween and Halloween means Hocus Pocus. That's just math. This witchy classic is just about the most quintessential Halloween movie out there.

This is one of the best movies of all time. If at any point in the year you need to feel like it's crisp and cool in New York, watch this movie. The scenery is gorgeous, and the outfits...even more so.

It doesn't get much more classic than the original Halloween. But honestly, in addition to being super scary, it's got fall vibes all over it! The new Halloween reboot starring Jamie Lee Curtis comes out this October, so obviously you have to watch every one in the series leading up to its release!

Meg Ryan can do no wrong. You've Got Mail is a total classic, a fall classic for everyone who loves books, and a timeless romantic comedy. Yes, even though the technology is super old, the movie holds up.

Mel Brooks' total classic is the perfect monster movie to put you in the mood for Halloween. It's one of the funniest movies ever made, and it's got that spooky fall vibe.

Halloweentown holds up 100 percent. I've watched this Disney Channel Original Movie as an adult, and it's just as charming and spooky and delightful as ever.

O Captain, my Captain! Get in the back-to-school spirit with this boys' school classic starring a young Ethan Hawke and the legendary Robin Williams. If you want to cry your eyes out (which, let's face it, we all do sometimes), this movie is for you.

The Princess Bride is my favorite movie of all time, and while it's great to watch all year round, something about its aesthetic reminds me of autumn. Does anybody want a peanut?

The Craft is maybe one of the most '90s movies that came out in the '90s, and that is a compliment. It's for all the badass witchy women out there.

Get those tissues ready because you're watching Stepmom! Even the poster just screams "fall"! Julia Roberts and Susan Sarandon are perfectly bundled up and ready for fall and dramaaaaa.

Why didn't we know that Michael Keaton would end up an Academy-Award-nominated actor? We were stupid, y'all. Of all the movies on the list, even the horror movies, Beetlejuice might be the most disturbing. Which makes it absolutely perfect for fall!

Fall means football season! Mix football with the start of high school with a classic tale of a town overcoming its racial differences, and you have a classic on your hands.

Who can resist Boston in the fall? No one, and that's why everyone loves Good Will Hunting. Unsurprisingly, this is Robin Williams' second appearance on this list.

It's right there in the theme song: They're creepy and they're kooky. Mysterious, spooky, altogether ooky... OK, that last one doesn't make much sense, but it doesn't matter. They're the Addams family!

The Nightmare Before Christmas

Is it a Halloween movie or a Christmas movie? No one will ever know, but one thing is certain: The Nightmare Before Christmas is the perfect fall/winter movie.

The headless horseman is an iconic fall character, what with his giant pumpkin head and all, so the Sleepy Hollow movie starring Johnny Depp and Christina Ricci (this spooky actress is actually in three movies on this list!) makes it the perfect fall film.

This is one of the few Thanksgiving movies out there, and it stars Steve Martin and John Candy, so you can't really go wrong here.

Boo! Casper is a friendly ghost, and this is a classic kids' movie that deserves to be rewatched, by you, this fall season.

I mean, just look at the colors! This stop-motion romp is practically the season of autumn incarnate. It's foxy...in all the ways.

The Exorcist may have been made a few decades ago, but it's still as terrifying as ever. It's a practically perfect horror film that will put you in the mood for Halloween!

Election is one of Reese Witherspoon's earliest, most devastating roles. Tracy Flick is truly psychopathic in all the best ways. It's a back-to-school movie on uppers, and it's delightfully deranged.

Sure, you can watch the original. That one's great too. But I couldn't pass up this GIF of Kate McKinnon. I just couldn't. The Ghostbusters reboot was just as fun and spirited as the original, and we got this GIF out of it, sooooo.

It's the Great Pumpkin, Charlie Brown

Charlie Brown specials exist for almost every holiday, and they're nostalgic and great in all the best ways. Watch this one on Halloween and then keep it up for A Charlie Brown Thanksgiving!

A classic for the ages, Matilda brings a whole lot of whimsy and book-nerdery (that's a word, right?) to the back-to-school movie. This is another one that holds up miraculously well.

Fun fact about Scream: I first watched it when it was on TV once and I was about to be home alone. My mom was like, "Watch it, it's sooooo funny!" and then she left the house. This movie is funny, but it also scared the pants off of me. It's a good one.

Get Out became a classic the instant it hit theaters. It's one of the tightest, most current and terrifying movies ever, and it only gets better with repeat watchings, which is why you should totally watch it this fall.

Tim Burton has a few movies on this list, as he should because he's the king of spooky movies. Edward Scissorhands is on the lighter end of those movies...somehow...and it's just wonderful. A perfect blend of sweet and scary that only Tim Burton knows how to accomplish.

Could I have gotten through this list without putting a Mary-Kate and Ashley Olsen movie on it? Yeah. Should I have? No. Double, Double, Toil and Trouble has the twins trying to rescue their great aunt from her evil, witchy twin sister. It doesn't get much better than that. Oh, wait, yes it does. It also stars the impeccable Cloris Leachman (her second appearance on this list!).

OK, Gilmore Girls isn't a movie, but the show is basically the season of fall. Like, I don't know if fall existed before Gilmore Girls, and you should probably watch the whole thing (maybe minus the new Netflix episodes) this fall. In fact, that's what I'm going to do right now. Share this with someone who needs a movie rec!