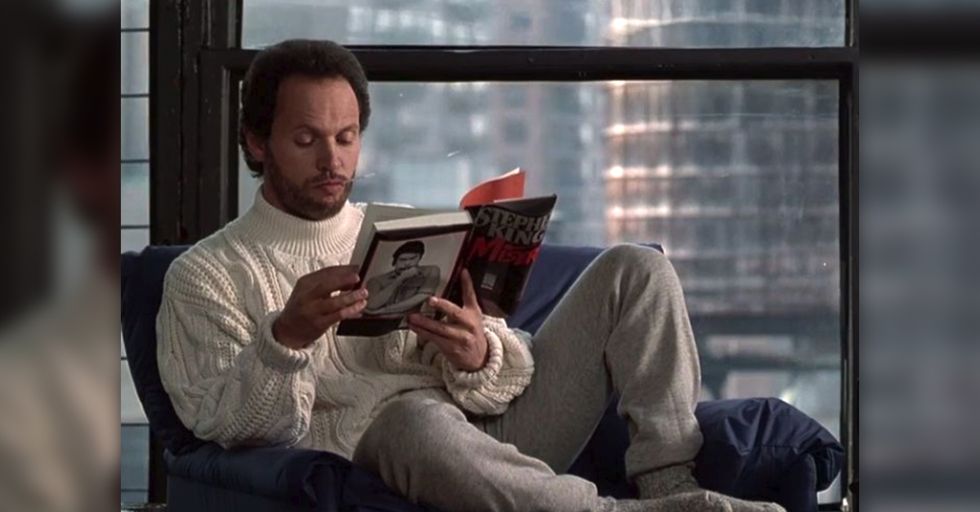 14 Perfect, Tiny Details You Missed in Your Favorite Romantic Comedies

A good rom-com provides you with the perfect opportunity to pop some popcorn, throw on your comfiest clothes, and snuggle into your couch for some good vibes.

Most romantic comedies are somewhat predictable. The two main characters meet cute, have some kind of disagreement, and then (obvs) end up together.

But as it turns out, there may be more going in the rom-coms you're watching than what you actually perceive.

Here are 14 teeny-tiny details you may have missed on your first viewing (or your second or third or fiftieth).

Let's start with With Harry Met Sally because it is the best rom-com ever. (Maybe even the best movie ever.)

You might have noticed that Harry reads Stephen King's Misery during the film. It's not because he's later revealed to be a crazy fan with murder on his mind. Actually, the inclusion of the book is a nod to director Rob Reiner's next film project which was — you guessed it — the Misery film adaptation.

See her glance over to the side? In reality, Meg Ryan was looking over to Rob Reiner as Billy Crystal had started improvising the "pecan pie" scene. Reiner gave her the sign to keep going and she immediately fell back into character and played along as Sally. Oh, Meg. Is there anything you can't do?

OK, one more from When Harry Met Sally. Remember the "White Guy Overbite"?

Harry performs the move when he sits next to Sally on the plane. Much to Sally's disgust.

Yep! Ladies and gentlemen, that's the infamous "White Guy Overbite" from When Harry Met Sally! (You'll recall, of course, that Wazowski is voiced by Billy Crystal.) I guess it's more of a Little Green Monster Overbite in this film.

During the hilarious lobster fiasco, Annie starts taking pictures as Alvy struggles with the pinchy crustacean. Later in the film, it's revealed what became of those photographs...

Annie had them developed and used them to decorate her apartment! Nothing like using photographs of your ex-lover battling a lobster for some home decor.

When Richard Gere's character takes Julia Roberts' to the opera, the two of them go to see La Traviata. Opera fans will have picked up on this already, but La Traviata actually tells the story of a prostitute (or "courtesan," if you prefer) who falls in love with a wealthy man. (It doesn't end very well for her.)

The cinematography of 500 Days of Summer has some interesting details when it comes to color.

Namely, all of Tom's scenes are mostly brown and beige, while Summer's are blue. (Additionally, Tom's clothing is usually drab-colored while Summer, again, wears a lot of blue.) When Tom is with Summer, the "blue-ness" of her scenes starts to take over — like when he's surrounded by dancers in blue (and a blue cartoon bird) for the big musical number. But after they break up, the scenes transition back to brown.

And remember this particular "Expectations vs. Reality" scene?

First of all, note the brown color (Tom and Summer aren't together at this point in the film). But there's another reveal in this shot.

Did you catch it?

Summer's wearing an engagement ring. Of course, we learn shortly after this shot that she's engaged, but some of us were so focused on the "expectations" side of the screen that we missed the fact that that information had already been revealed. OK, up next is 50 First Dates...

T.B. Callahan from Sandusky, Ohio... Ring a bell? That's Tommy Boy Callahan from the movie Tommy Boy! (This line is said by Dan Aykroyd, who played the Callahans' rival in the film.)

Check out the hat Paul Rudd's character Josh is rocking in Clueless:

Note the KU for the University of Kansas. As it turns out, Rudd also attended KU in real life!

At one point, Cher mocks Josh for his goatee. (Obviously, it's part of his ultra-cool, Nietzsche-reading, hip guy persona.) Anyway, later in the film, we see the effect Cher's ribbing had on Josh:

He shaved it. Honestly, it's probably for the best.

In Notting Hill, this painting of a goat playing the fiddle by Marc Chagall plays an important role in the development of Anna and Will's relationship.

Anna remarks on Will's poster of the painting and later buys him the original. It's called "La Mariée" which is French for "The Bride." The name is pretty fitting considering the other place it shows up in the film...

Which is on the couple's wedding cake. Look closely at the pyramid and you can see a stylized fiddle-playing goat.

Also in Notting Hill is this heartbreaking scene showing how sad Will is without Anna:

It begins with Will walking by a woman who is pregnant. Will continues walking while the scenery changes around him to show the passage of time — seasons pass and eventually, it's a year later and sad will is still on the same street.

And so is that pregnant lady.

Only now, she's not pregnant anymore. She's holding her young son, who's nearly a year old. (Look closely and you'll see her in the background. The baby is wearing a red jacket.)

At the work Christmas party, Harry (played by Alan Rickman) tells his wife (Emma Thompson) she's "a saint." Just a second later, he's approached by the woman you see above. You know. Not a saint.