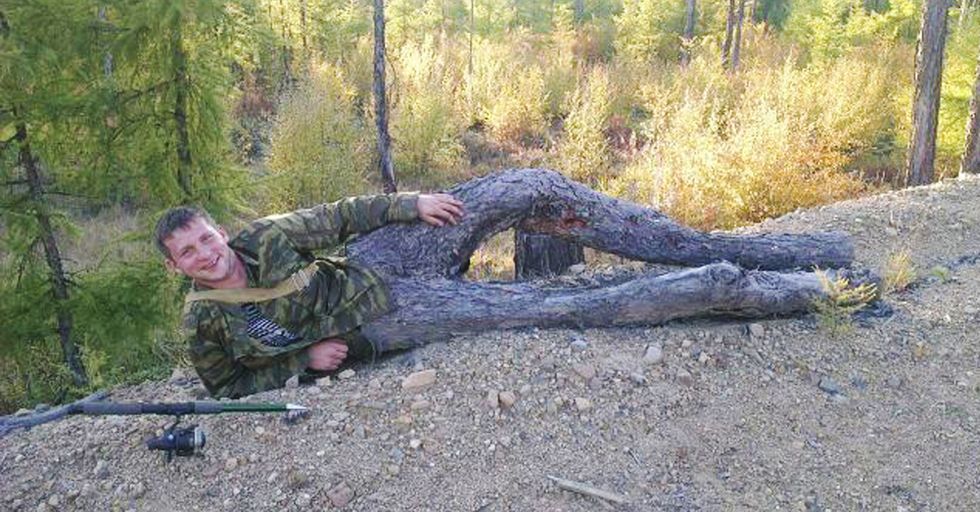 19 Perfectly Ridiculous Photos From Around the Internet

Every once in a while, what you really need is a good, hearty laugh.

If today happens to be one of those days for you, well, I've got good news.

Get ready to do a lot of this:

(Looking at your computer and laughing, that is.) 'Cause I've found 19 of the most ridiculous pictures the Internet has to offer. Enjoy!

You really shouldn't treat the people you love like potatoes. Especially not your angles!

This is the hilarious, wholesome content the Internet was made for. (Also, is anyone else feeling hungry after seeing this?)

The pants for people who really like their friends.

The Sisterhood of the Traveling Pants movies started out fine. But the sequels ended up getting pretty weird.

I hope the photographer got his good side! This next picture shows what it means to become one with nature...

Rumor has it that right after this picture was taken, he started saying, "I am (half) Groot." I imagine it got kind of annoying after awhile.

This is my kind of exercise.

Finally, I've found a diet and exercise regimen that works for me! I just have to carry a fence around everywhere I go.

This is obviously a top student:

Unfortunately, he won't be able to take great notes with this "laptop." That being said, you're gonna want to sit near him at lunchtime.

They say necessity is the mother of invention. I'm not sure that really applies here, though.

It doesn't give you the power to wipe out half of the universe's population, but it does provide exactly one delicious snack. So...pretty good, right? This next picture shows what true friendship is...

When there are five of you but your table only seats four:

Better luck next time, buddy. And good luck getting to your drink on the inside!

If you're going out for a night on the town, you should be sure to dress for the occasion. And don't forget your accessories!

It was nice of you to offer, though. I'm pretty sure sharing is one of those things the big guy upstairs is a fan of.

Here's how you know you've made it as a taxi driver:

I don't think I'll ever feel as fulfilled at work as this taxi driver probably does after being asked to pose for a taxi driver calendar. Way to go, dude!

Halloween at the DMV:

It's good to know that the people who work there have such a great sense of humor. (Hopefully, they're a little faster than the guy from Zootopia, though!) And speaking of the DMV...

This guy had a pizza delivered to him at the DMV!

If you're not happy with your life, it's time to make a change. Sometimes, that just means ordering a pizza.

This poster was at an actual blood donation center:

You've got to love doctors with a sense of humor. As long as I get my juice and cookies at the end of the day, you can do whatever you want.

Is it just me or does this flyer sound like the beginning of a children's book? ...Which you would find at the library! That's one way to get Max in there.

The gift that keeps on giving:

Let that be a lesson to you. Next time your birthday rolls around, you might want to be a bit more specific. Unless you need another ladle!

This dog owner seems to have things figured out:

This is especially handy if you order something that needs to be kept cold! Share this list with someone who could use a laugh today!