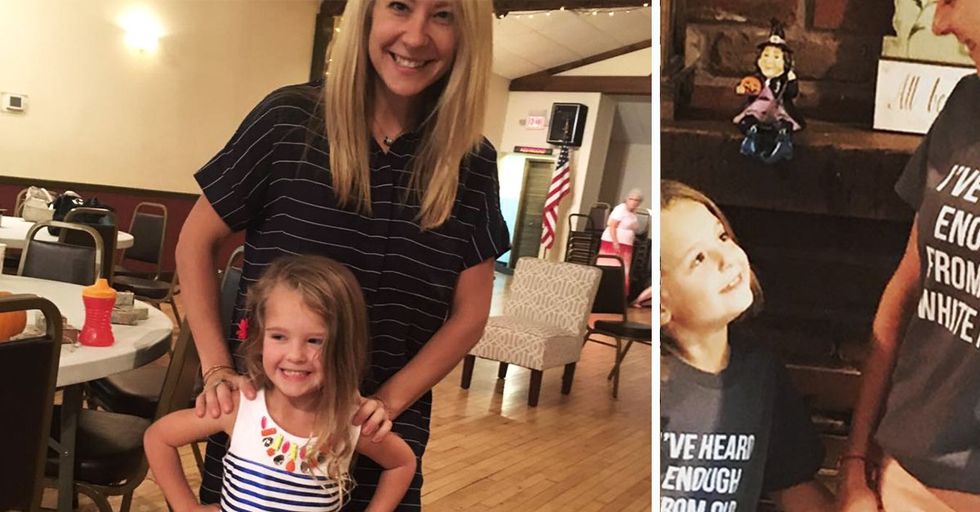 Of all the things to call the police over, this shouldn't be it. Just a couple of days ago, one woman posted a shocking story to her Facebook account. Another woman had called the police on her and her young daughter for wearing t-shirts.

The story's poster, a woman named Katherine, had gone to lunch with her family. She hadn't intended to wear a politically divisive shirt. Politically motivated, yes, given the upsetting reaction to sexual assault survivors in today's politics. But Katherine didn't believe that the topic of sexual assault was a partisan issue. This other woman did.

So, Katherine went on to share her story. A stranger reacted badly to her, but police (and others) did something totally different! Keep reading for the full story of Katherine's encounter, the outcome, and the true reason she's sharing it!

Katherine Anna (and her daughter) have an empowered sense of style.

One day, they wore these shirts—reading “I’ve heard enough from old white men"—when the family stepped out together to grab some lunch.

So, what’s the big deal?

Plenty of us would agree that these shirts are a valid way of expressing frustration with the current state of sexual assault policies in our government, along with reproductive rights and many other issues.

However, not everybody agreed.

One woman in, particular, became EXTREMELY agitated when she saw what these two ladies were wearing. Here is Katherine Anna’s account of what happened, as posted on her Facebook page.

Basically, someone reacted poorly to her message.

Today, while out to lunch, a white woman triggered by our shirts, followed us outside where we were waiting for our food. -Katherine Anna

And this woman didn’t like that the shirts related to the recent sexual assault allegations against Brett Kavanaugh.

She wanted to know what the shirts meant. I could have literally said a million things, but went with the most recent (Kavanaugh). She then began yelling and screaming. -Katherine Anna

The woman took this poorly—but after all, she was the one following them.

I asked her why she was yelling, mentioned that she wasn’t required to wear this shirt and also said she didn’t need to look at me. I calmly reminded her that she was the one who followed us outside and maybe she could, like, go back inside. -Katherine Anna

For some reason, Katherine’s (harmless) shirt made her feel "unsafe."

She didn’t. She did, however, call the cops. We heard her say: “She is wearing a racist shirt....they’re white. I feel like I’m in danger." (My kids were eating hot dogs, Len was sippin’ a Diet Coke, and I was waiting for my açaí bowl.) -Katherine Anna

And the police did come…but, as law enforcement, they understood the 1st amendment.

When the cops came, they reminded her about freedom of speech and I guess she left. The cops understood our message, laughed with us, and we all hung out for a bit. -Katherine Anna

Look—the policeman even introduced the kids to his canine partner!

Luckily, everyone else in the vicinity understood that Katherine hadn’t done anything wrong, even if they didn’t agree with the message (although pretty much everyone else did).

The family got support from other restaurant goers.

The other patrons came over to tell us they support what we are saying and the restaurant gave us an apology gift card- the manager saying this is something his girlfriend would wear. -Katherine Anna

But Katherine posted this story to make a point.

Women (and men) who have been sexually assaulted, and come forward, must be taken seriously.

Either way- you’ve definitely never been sexually assaulted. Because if you had been, you’d know that no traumatized woman would come forward publicly without good reason. -Katherine Anna

At the end of the say, those shirts and the message behind them aren’t meant to be politically polarizing.

Sexual assault is not a partisan issue. And if you’re making it one, you’re not listening. -Katherine Anna

Katherine finished her story with this post-script mic drop:

Ps. If you’re insulted that the shirt says “old white men" and your dad/brother/husband is super duper great, then this doesn’t apply to him. SO RELAX. Remember: Context. And note: almost all those who hold the power and future of our country in their hands ARE OLD WHITE MEN. So... -Katherine Anna

Old white men have a lot to do with the success of this country. -Ian Scott

But luckily there was plenty to back up Katherine’s argument.

What you say is a true statement. So is "Old white men have a lot to do with the failures of this country." The statement on the shirt does not dismiss the successes of white men. It is simply stating that perhaps its time to let other people share the power as well. -Tom Courtney

And this encounter parallels a much more common one.

This is NUTs, and also some insight to how POC feel all the time getting police called for nothing. -Allison Tracy

And, you have to wonder why a dog was necessary.

I’m just wondering why they had to send out a K9 to this 911 call. We usually save that for bank robbers that flee on foot. -Ad Court

In this case, however, Katherine was able to turn the other cheek:

I just smiled and tried to turn the convo into something productive. One lady came out later and goes: we were all watching and saw u laughing at her. That was the most appropriate response. -Katherine Anna

Some people were just surprised that it happened.

And others were totally on board with Katherine’s trend-setting.

I’m an old white man, and I’m ready for these dusty old dinosaurs to step aside and let a younger generation take over. -Steve Pologruto

And Katherine was happy to reiterate for anybody what her shirt really stands for.

That’s why i think the context is so key here. It’s Oct 2018. The setting is critical to understanding the shirt. Ya know? I mean... common sense dictates this shirt is specifically talking about the old white men who have a strangle hold on power in the US. Not all of the them. Just the ones doing everything in their power to maintain said power. No one intelligent would assume I’m talking about every old white man who has ever held office or done something great. -Katherine Anna

In other words, don’t get worked up!

She's not targeting "all men." When a particular group of older men are domineering a conversation that really doesn’t effect them, it’s time to diversify the group.

BTW- if you’re a fan of her shirt, it’s not hard to find.

Hopefully, nobody else turns Katherine’s message into something it isn’t.

Katherine didn’t tell her story to alienate Republicans or Democrats or to be political. This is about the completely nonpartisan issue of sexual assault (which is a crime), and the countless survivors of assault who are tired of being ignored or not taken seriously. Kudos to Katherine for putting her story out there! Share this powerful message with your friends and family!
20%