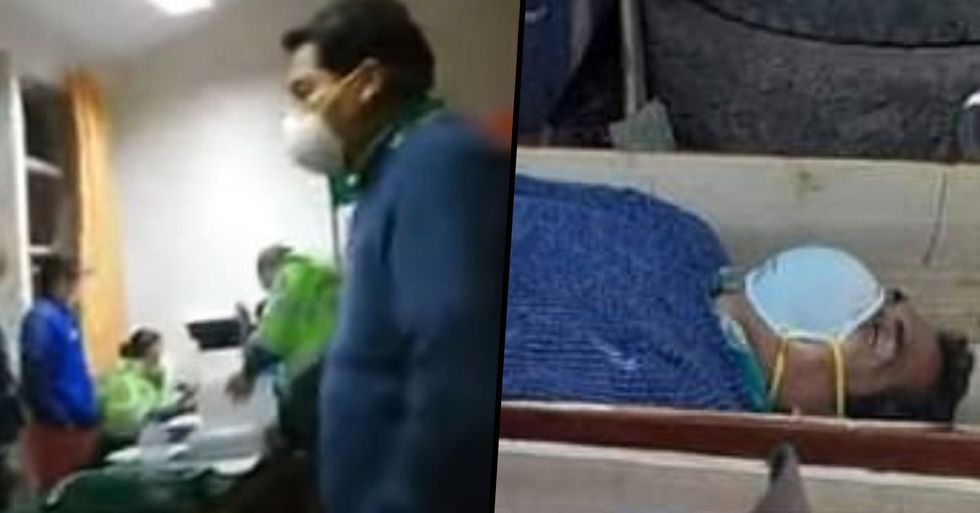 A Peruvian mayor has made headlines this week after he pretended to be dead in a casket to avoid police officers catching him breaking lockdown rules.

Keep scrolling to read more about this unbelievable yet hilarious story...

We can all agree that living in lockdown isn't at all fun.

Many parts of the world are currently experiencing life in lockdown and even though it is for our own good, we aren't exactly having the best of times.

Thanks to the global pandemic...

Living in lockdown is the only way to protect us from the deadly virus that has already taken so many lives.

I dont know what the situation’s like for most where you are but there are still very long queues @ groceries like… https://t.co/V3d9PloZvs
— Amuse Bouche (@Amuse Bouche)1587589572.0

Even simple tasks such as going to the supermarket to buy groceries is now a strenuous and difficult task.

There are many people out there who have been breaking their country's lockdown rules.

And they have been going about their days as normal... almost as if we aren't living through a global pandemic!

And because things have gotten that much out of hand...

Authorities have been issuing fines to those who are refusing to abide by their country's lockdown rules.

It's terribly sad that it has had to come to this...

Especially as healthcare and key-workers have been working so hard around the world to keep the virus at bay.

Out of all of the people breaking lockdown rules...

You most certainly wouldn't expect a mayor to be amongst them.

Well, it's time to think again!

A Peruvian mayor was caught recently doing the most bizarre thing to get out of being caught by police breaking lockdown. You really can't make these things up.

Peru has taken a hard hit from the pandemic.

Things aren't looking good for the country at all...

Meaning that officials, including the mayor of Tantara, Jaime Rolando Urbina Torres, have got a lot on their plates right now.

The mayor has faced a lot of backlash over the last few months in regards to the way he has dealt with the pandemic. Earlier this month, he was hauled in front of an emergency town meeting to explain why he had only spent 8 of the fifty-four days of lockdown in the area.

While he was heavily criticized by officials for failing to open emergency quarantine shelters and introduce safety checks, he insisted the police and the health department were the ones at fault.

And now, he has perhaps pulled off his worst stunt yet.

The mayor was caught breaking lockdown rules by police recently, but instead of just admitting defeat, he tried to hide from the authorities in a very inventive way.

Torres and his friends decided to jump in some nearby empty caskets and drawers...

And play dead to try and shift the police officers approaching them. They didn't even bother to take off their facemasks, which was a huge give-away.

This behavior is utterly gobsmacking...

And it didn't take long at all for the mayor and his friends to break their act and hand themselves in to the officers.

When Torres and his pals were taken to the local police station...

They admitted to all being under the influence of alcohol - which explains an awful lot - and they were booked for violating curfew and social distancing laws, according to the Evening Standard.

And people have found the whole thing absolutely hilarious.

The story has been laughed at worldwide...

But what we must remember is that as a mayor, Torres really needs to be setting a good example and working hard to help his community rather than getting drunk with his friends.

Watch the video of Torres in the police station here...

For more on lockdown stories, keep scrolling to read about the maskless anti-lockdown protestor who invaded a reporter's personal space...