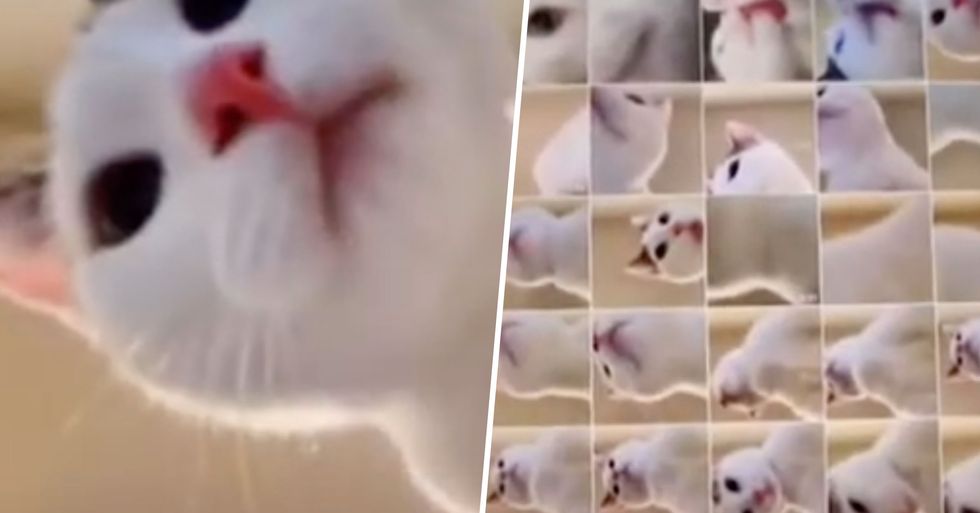 A pet owner was left with the cutest surprise after her cat took a dozen adorable cat selfies while she was out. They are super adorable, that's for sure!

Cats have an incredible charm about them.

It's no wonder why we're so head over heels for them.

Statistics show that there are around 74 million American cat owners...

And these statistics also reflect other parts of the world.

China is home to the second largest population of pet cats, with over 53 million people keeping the furry felines.

Do you know what else has a positive impact on one's health?

One Chinese pet owner left her cat alone in the house but came home to find the most adorable surprise...

Er Niu seemed to be a little bored while her owner was out, so she decided to master her selfie-taking skills using a tablet.

And when the woman returned home, she found all the evidence.

Firstly, there was cat fur all over the device which led her to wonder what could have possibly happened.

But after further investigation, she discovered a dozen "cat selfies" in her photo album.

And of course, she had to share them on the Chinese version of Tik Tok, Douyin.

Amused social media users flocked to the post to leave their comments about the cute find.

And soon enough, the post went viral and was seen by thousands all over the world and the comments kept on coming...

This is the first adorable snap:

Look at it's little, pink nose!

It really loved the action snaps.

A bit blurry but cute nonetheless...

And of course, we had the low-angle pictures.

Imagine looking this good from such a bad angle?

Only Er Niu can relate.

This one's a masterpiece.

And yes, there were lots of other ones too...

But we're obsessed with it too!

I hope the owner puts all of these individual photographs online too.

They're literal pieces of art.

And if you're in the mood for more feline news, then keep scrolling...

See how people on Tik Tok are making their cats happy...