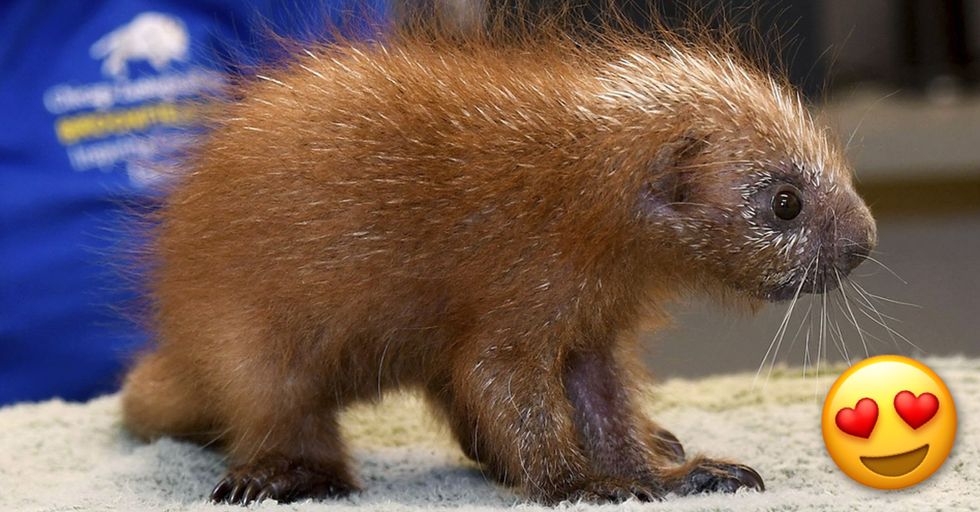 Not going to lie: I'm writing this right now with a puppy on my lap.

Don't ask about the logistics. I'm balancing my laptop in a very precarious position, but I'm doing it for you.

And since I'm having a real-life cuddle sesh, I thought I'd give you a virtual one.

The 19 pictures below of animals will make you have the same reaction as the girl in this scene from Love Actually:

These 19 adorable pictures of pets and animals are just for you and will make you go "Aww!" You're welcome.

This gorgeous pup seems a little overwhelmed in the snow for the first time. His eyes say, "I love this, but it's also a lot."

Look at that face! Ironically, this is the same face that I make when I fart. You heard it here first, folks.

Corgis are the kings of the Internet. Or should I say, the queens? You know, since the Queen of England owned a bunch of corgis?

This baby porcupine looks soft and fuzzy enough to hug, and that's just what I'd do if I were around it. The next animal is wearing an outfit, and you won't be able to deal.

I love his outfit. I love his face. I love everything about this picture.

Who are you in this group of friends? I am definitely that little hamster sitting on the nose of the golden retriever.

"Please sir, may I have some more garbage? I just love eating trash ever so much!"

Look at this happy, beautiful couple! They're going to have the most adorable puppies.

That is quite the seductive pose, my friend. The next one is just so sweet.

This is an adorably mismatched pair and I would 100 percent watch a show about them. I would love to be hired to write the theme song.

This pup has a pretty worried expression on his face. It's pretty much what I look like any time anyone tries to make me go out in nature.

This is the most majestic overweight animal I have ever seen in my life. And I would have paid good money to see him try and get down off of that stool.

This photo makes me believe that turtles are ticklish. It's too cute. The next one is a dog in goggles.

OK, this dog has life totally figured out. He's the coolest cat I've ever seen, and he's not even a cat. He's a dog!

The pure joy that I get from seeing a grown dog play with a teeny tiny baby kitten might only be matched on my wedding day. Maybe.

This adorable rabbit feels protected and powerful when it's hiding in its shark bed. I love this so much.

OK, this is too much. I know that its head probably naturally fell into that position, but the sloth looks like he's listening to her heart and it's perfect.

Look at the smile on that proud mama! She gave birth to ten beautiful St. Bernard/Great Pyrenees puppies. Share this with someone who could use some cute animal pics!