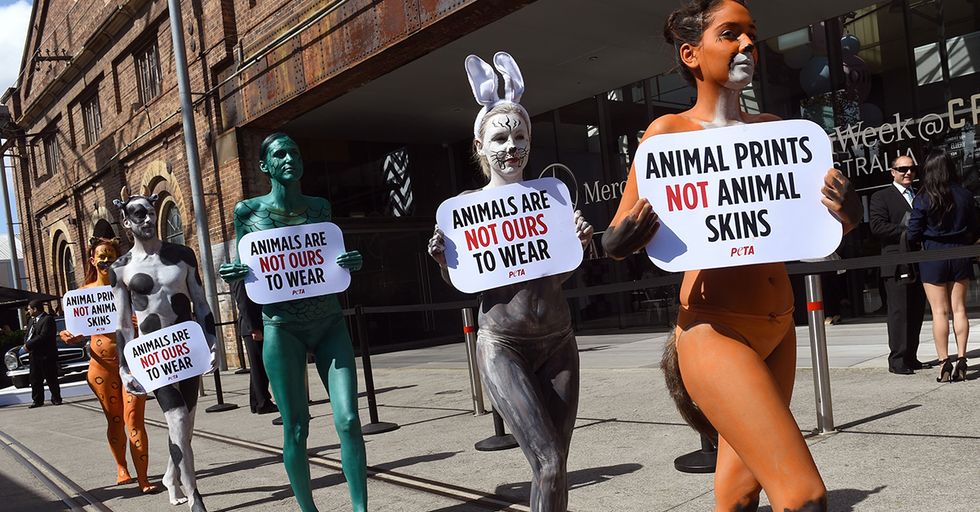 You know PETA, right? It is an organization that proposes to fight for the rights of animals. In theory, their mission is noble, and no one in their right mind would disagree with it – but recently, PETA has been at the center of an alarming amount of controversy.

PETA has been criticized before for euthanizing most of the animals the organization takes in at its shelters. They have compared the treatment of animals to that of Jews during the Holocaust. And while their latest gaffe is maybe not as blatantly disrespectful, it is if you think about it for half a second more. They recently took to Twitter to urge people to stop using "anti-animal phrases," and Twitter had some feelings about this– some very strong feelings.

The week was already shaping up to be an insane one in terms of news when PETA dropped this tweet on us on Tuesday:

"Words matter," it says before it implores people to "remove speciesism" from their conversations and say things like "feed two birds with one scone" instead of "kill two birds with one stone." When your eyes roll back to the front of your head, continue reading below.

It's hard to imagine that it gets worse than "feed a fed horse," but oh boy does it:

Just as it became unacceptable to use racist, homophobic, or ableist language, phrases that trivialize cruelty to a… https://t.co/SSWGW1xnuo
— PETA (@PETA)1543958638.0

Wow. It seems an awful lot like PETA is suggesting that saying "bring home the bacon" is equivalent to racial slurs or homophobic or ableist language. And that's just simply not true.

The response to PETA's new chart was swift:

People definitely got a kick out of it but nearly everyone agreed that it was pretty much a joke. Definitely not something to take seriously.

Yeah, this was pretty much the prevailing sentiment. PETA had to realize that this all sounded ridiculous, right?

Some people questioned if PETA was even serious about it. But PETA's history seems to suggest that they did indeed post this in an earnest attempt to change age-old idioms to make them less cruel toward animals.

I hate to feed a fed horse but... Unfortunately for all of us, this doesn't seem to be satire.

Most people thought PETA's chart was absolutely absurd and dismissed it right out. It's not that we don't want animals to be treated with respect. It's that this insistence takes it too far.

OK, this picture made me laugh out loud. I feel like PETA could use this book. I wish it was real.

Don't fret, PETA. This is a legitimate question– and yes, we'll get that turkey a sweater.

It's safe to say that this is a joke, but it does point out an essential problem with PETA's suggestions for these supposedly "pro-animal" phrases.

Oh yeah, there is also the very good point that animals do not understand at all when we say "beat a dead horse," for example. They! Do! Not! Care!

Even some vegans rushed into their mentions to say that what PETA was doing was "a bit much." That says a whole lot.

None of us are saying it's OK to beat dead horses. We're saying that the insistence on changing that language that doesn't affect horses at all makes PETA look silly and undermines any good that they do.

But like, we're kind of glad it happened because "bring home the bagels" is pretty priceless. Though doesn't it qualify as discrimination against those with gluten intolerances?

On a more serious note, this isn't the first time that PETA has claimed that treating animals poorly is akin to racism and homophobia, and that has to stop.

Um, what this person said. Also, speciesism is one of the worst looking words I have ever seen. I hate it.

Real people from real marginalized groups experience hate and negative language all the time, and it belittles what they go through to equate their struggle with the non-struggle of a pig hearing someone say "bring home the bacon."

I like the idea of avoiding violent language towards animals... But this is so ridiculous that I am pretty sure PET… https://t.co/Wc8gkIkRt7
— the protagonist (@the protagonist)1543975685.0

This move is self-sabotage for PETA's movement and message. The organization can't seem to stay out of controversy long enough for their efforts to mean anything.

@peta That last one was anti-plant language do they not breath as well we’re evolving right RIGHT https://t.co/8BuYgQPNC9
— Worzene (@Worzene)1543972421.0

Not to mention if you're grabbing a flower by its thorns, that's anti-plan language. Plants are species too. Where does the cruelty end?

Don't throw the baby out with the bathwater!

even people who have accidentally thrown their babies out with the bathwater haven’t put in a request to change old… https://t.co/Iky0ndsXQS
— Morgan Murphy (@Morgan Murphy)1544034116.0

This is hilarious but also salient! Many idioms are quite disconnected from the actual words that make them up.

Sorry to say this, PETA, but I have never seen so many responses to a tweet that like, "Man, now I really want a burger." It's having the opposite effect.

I hadn't even thought about how problematic PETA's replacement phrases were! Think about this, PETA!

This is going a little bit far. Maybe. Uh oh, the more I think about it, the more sense it makes.

OK, I had to throw in my own response to this tweet because it's a top-notch Hook reference and frankly, it deserves to be shared.

The proof is in the burger:

See? Not the effect PETA was hoping to have, I don't think.

Hey-o! This is a good one. However, you should never jump over sharks. It's disrespectful to the shark.

Most people laughed off PETA's insane tweet, but some people got legitimately angry, and honestly, we don't blame them.

And yet, after all the hate, PETA still doubled down:

To the haters: with so much negativity in the world, why not lighten up and use language in a way that encourages b… https://t.co/cajLSdRQDi
— PETA (@PETA)1544022990.0

If you haven't smacked your hand to your forehead yet, I envy you. Share this with someone who will look like Schmidt here while reading this.