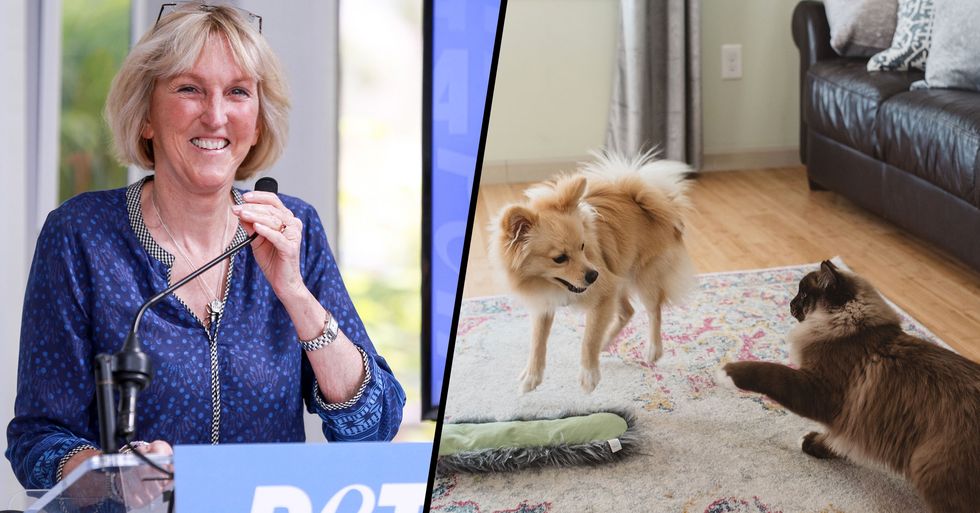 We all know PETA well for its intense and never-ending campaigning against the cruelty of animals.

The people behind the ethical organization are super serious about animal rights, and they are no strangers to controversy.

But PETA has now announced that they want to ban the word "pet" because cats and dogs are "equals."

Who hasn't heard of PETA?

PETA (People for the Ethical Treatment of Animals) is an organization that campaigns for the ethical treatment of animals, and we're pretty certain in saying that we highly doubt anybody has gone without seeing one of their gory Instagram posts or their intense street marches.

And it was started by Ingrid Newkirk and Alex Pacheo, who were both animal rights activists at the time.

The organization first caught attention in 1981...

The Silver Spring Monkeys Case is what catapulted PETA into the spotlight after they raised awareness about a behavioral research center in Silver Spring, Maryland, that conducted experiments on monkeys.

PETA's exposure of these experiments triggered an amendment in 1985 to the Animal Welfare Act...

And the organization has continued to grow in popularity ever since.

The organization now has more than 6.5 million members globally...

And it focuses its attention on the 4 areas in which animals suffer the most - the food industry, laboratories, the clothing trade, and the entertainment industry.

Basically, if there's an animal involved...

PETA will have something to say about it.

Many famous faces have partnered with PETA over the years...

PETA is also known to strongly support the vegan lifestyle...

And its campaigners all around the world strongly promote this lifestyle, and they're known to get a little bit pushy towards those who don't agree.

And they will always go the full length to demonstrate the extent of animal suffering, whether that's from the graphic exposure of slaughterhouses or from the calling out of cultural entertainment such as bullfighting.

Sometimes, it takes an extreme shock to see active change...

And PETA's controversial protesting methods have proven successful in raising awareness of animal cruelty and abuse and ultimately, getting more people on board to help animals in need.

PETA believes in helping all animals...

And that includes our beloved pets.

It turns out that Ingrid Newkirk has some pretty strong opinions on the common household pet...

The seventy-year-old founder isn't exactly the biggest fan of the world "pet."

She believes the term "pets" is a derogatory saying...

And she has made a global call for people to stop referring to their animals as pets.

Animals are not decorations...

Speaking to Metro, Ingrid said, "They are not ours as decorations or toys, they are living beings."

An animal is as much of a living being as we are...

"Animals are not pets - they are not your cheap burglar alarm, or something which allows you to go out for a walk. They are not ours as decorations or toys, they are living beings."

Ingrid wants the public to shift its way of thinking towards animals...

"A dog is a feeling, whole individual, with emotions and interests, not something you 'have'," she added.

An animal is not for show...

"How we say things governs how we think about them, so a tweak in our language when we talk about the animals in our homes is needed," she went on to say. "A pet is a commodity but animals should not be things on shelves or in boxes, where people say, 'I like the look of that one, it matches my curtains or my sense of myself'."

Ingrid hopes for a global change in attitude...

"Hopefully, the time is passing for that kind of attitude," she said.

This isn't the first time that PETA has called for animal equality...

They have previously called for the term "pet owner" to be changed to "guardian" or "human carer" instead.

And at the end of the day, owning an animal is a life-long responsibility and they truly become a part of the family.