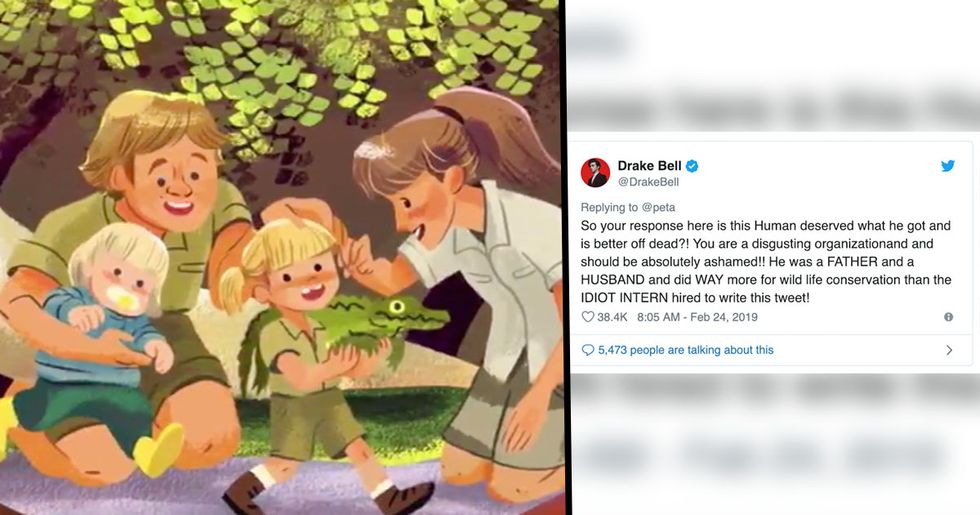 For a couple of years now, PETA's been known for its provocative and controversial marketing techniques.

Now, a couple of days ago, PETA enraged the world again, when it publicly condemned late Australian conservationist Steve Irwin's work. According to PETA, the things he'd done in his career were nothing more but "harassment" of animals who were simply going about their day.

The internet instantly filled up with Irwin's fans defending the man and attacking PETA. Even celebrities pitched in.

However, other wildlife conservationists, who are fans of Irwin themselves, say they would never touch wild animals like he did.

PETA also published an article on their own website, explaining why they don't see Steve Irwin as a "wildlife warrior."

It seems the animal rights giant saw that being nice just doesn’t do it anymore, and it was time to step up their game.

So they employed two things that people pay attention to: sex and world’s favorite TV stars.

Two months ago, PETA shared an X-rated vegan ad to show the benefits that going vegan brings to the bedroom. The graphic ad received so much backlash and anger, even from PETA’s own followers.

At the time of the ad's release, The Sun reports, PETA wrote on their website that cholesterol in meat, dairy, and eggs "slows the flow of blood to all the body’s organs."

The video was originally filmed in 2016 and submitted for consideration for the SuperBowl, but it was rejected for the intense sexual content.

According to scientific research, men who exercise regularly and have a fruit rich diet show a 20% reduced risk of erectile dysfunction.

PETA director Mimi Bekhechi has also said, "The consumption of animal products has long been linked to artery blockages that cause inadequate functioning of not only a man's heart but also all his other vital organs."

"While foods high in fibre, including fruits, vegetables and whole grains, scrub the plaque off the arterial walls and get blood flowing to the parts he [a man] needs it flowing to, improving his love life and bringing satisfaction to someone else."

She added, “PETA want to send the message to men everywhere that meat and milk make you sleepy, not sexy, and that vegans are more virile."

Through the tweets, PETA condemned Google’s doodle that celebrated the life of the Crocodile Hunter star.

#SteveIrwin was killed while harassing a ray; he dangled his baby while feeding a crocodile & wrestled wild animals… https://t.co/AbC4jmgytg
— PETA (@PETA)1550855314.0

PETA claimed Irwin’s work was actually "harassment" of wild animals that should have been "left alone in their natural habitats."

Steve Irwin was killed by a stingray in 2006, Evening Standard says.

Steve Irwin’s actions were not on target with his supposed message of protecting wildlife. A real wildlife expert &… https://t.co/EY1pPo9lbI
— PETA (@PETA)1550885605.0

PETA’s tweets read, "Steve Irwin was killed while harassing a ray; he dangled his baby while feeding a crocodile & wrestled wild animals who were minding their own business."

"Today’s Google Doodle sends a dangerous, fawning message. Wild animals are entitled to be left alone in their natural habitats."

"It is harassment to drag exotic animals, including babies taken from their mothers, around from TV talk shows to conferences & force them to perform as Steve Irwin did."

And despite the criticism they have received from all over the world, Evening Standard says, PETA stands by their words.

Many people called the organization "insensitive" and "disrespectful." Even celebrities didn’t hold back their opinion.

"His life mission was to save animals and educate people about them. I’m one of many vegetarians who rip out their hair when PETA weighs in. Shame on you."

Actress Lesly-Ann Brandt: "That man dedicated his life to saving Australian wildlife and he is still doing so from the grave as I’ve seen first hand while visiting Australia over the years."

"You guys need to choose your battles wisely. Attacking Steve Irwin does not save animals."

Someone also edited PETA's Wikipedia page out of anger with their latest tweets, Plant Based News reports.

The first sentence read, "An a**hole extremist organization based in the fiery pits of hell, and led by Satan himself, its international president."

Its Director Elisa Allen said, in response to the Wikipedia comment, "The vitriol of this troll's post speaks for itself. PETA US' tweet was simply an honest, factual comment stating that it was inappropriate for Google to create a candy-coated cartoon glorifying someone who spent his life interfering with wild animals."

But it wasn’t all just hate that PETA received. Some people supported its claims.

Japhy wrote, "PETA are right, Irwin did it for his own career, not for the sake of the wildlife." Heavy metal fan agreed, "Well said and true."

Horseman4: "They do have a point though."

According to iNews, Irwin’s family hasn't responded to PETA’s tweets. However, his wife Teri did thank Google for “commemorating Steve’s life so beautifully," while his children retweeted the doodle.

So how, exactly, should Steve Irwin be remembered? Is he a hero or a TV made celebrity?

"Probably now it wouldn't be looked at as so good to touch the animals like he used to."

"But at the time he was doing it, it inspired loads and loads of children to go on and work with animals."

At the time of Steve Irwin’s death, the Guardian's author Germaine Greer published an opinion article, claiming the animals had "got their revenge."

"What Irwin never seemed to understand was that animals need space," she wrote, according to BBC.

"There was no habitat, no matter how fragile or finely balanced, that Irwin hesitated to barge into."

"There was not an animal he was not prepared to manhandle. Every creature he brandished at the camera was in distress."

Lots of the animals you’ve seen Irwin with on TV lived in Australia Zoo which is still owned by his family.

BBC wrote, "Anneka Svenska disagrees with keeping animals in captivity, but says what Steve Irwin did has to be put 'into balance.'"

Svenska also says she wouldn’t touch wild animals herself because "they need to be left to be as they are."

She has recorded several programs with rescued wolves, but says "approaching them in the wild would put them in danger."

"If I was to go out into the wild and start feeding or interacting with wolves then you end up with a lot of dead animals because they become too tame," she says.

"Touching animals in parks that are used to being touched" is fine, Anneka says. "I think the criticism comes when he's in the wild and chasing down animals in the wild."

BBC also reports that, back in 2004, Irwin "was accused of breaking wildlife laws while filming in the Antarctic."

Promotional material for Ice Breaker claimed he "slides down hillsides with penguins, almost rubs noses with the notoriously dangerous leopard seals and spends the most inspiring time with two friendly humpback whales."

After an investigation, the charges for breaking the rules were dropped.

But then another controversy started when he decided to walk into a crocodile enclosure "with a dead chicken in one hand, and his one-month-old son in the other."

An investigation began into whether he'd breached workplace regulations... again.

PETA has published an article, explaining why they don’t see Steve Irwin as a conservationist or "wildlife warrior."

"Although [his] supposed message-emphasizing habitat protection and endangered species conservation-is often right on target, [his] actions are often quite contradictory," PETA wrote. "Hauling animals to television studios or ambushing an alligator with ropes, duct tape, and a camera crew compels people to approach wild animals themselves or—even worse—purchase one to keep as a 'pet,' thereby fueling the cruel exotic-animal trade."

“Does the public really need to see someone dragging a frightened snake out of a hole and flailing the animal around on a stick in order to realize how important and morally imperative it is to respect and protect that animal?"

"True wildlife experts, such as Jean-Michel Cousteau, frown upon the idea of hauling exotic animals around in an endless parade of shows and exhibits and disturbing animals in their natural habitats."

"Cousteau stated that Irwin would 'interfere with nature, jump on animals, grab them, hold them, and have this very, very spectacular, dramatic way of presenting things.'"

Cousteau continued, "Of course, it goes very well on television. It sells, it appeals to a lot people, but I think it’s very misleading. You don’t touch nature, you just look at it." Clarifying where they stand in all of this, PETA concluded, "PETA commends those true wildlife warriors who work daily to educate the public about wildlife conservation and to protect the habitats of our wild-animal friends..." "...all while giving them the privacy and the space that they need and deserve."