PETA Tried To Guilt People on Twitter For Eating Bacon, but It Backfired | 22 Words 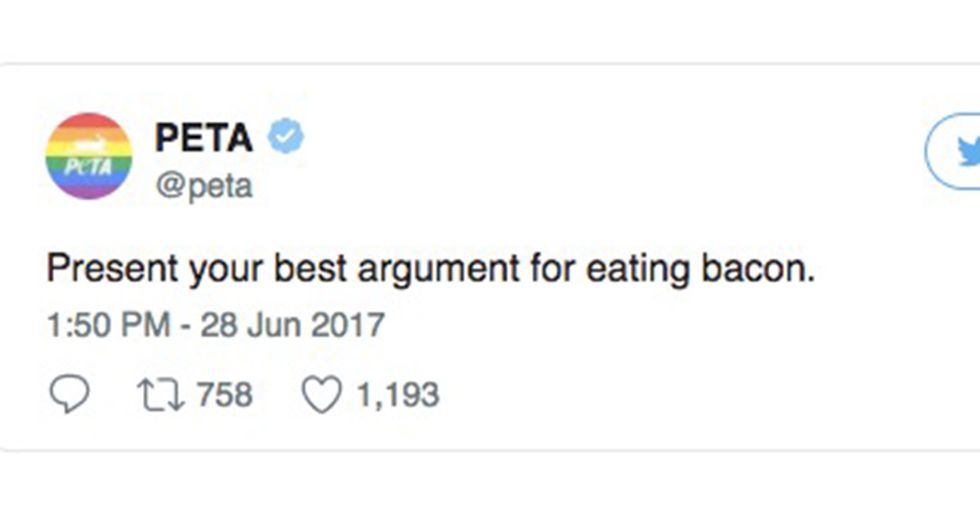 PETA Tried To Guilt People on Twitter For Eating Bacon, but It Backfired

PETA's concern for the well-being of animals extends to how animals are treated by the food industry, and also just the general idea of eating animals. So when the animal rights group asked for feedback on the "best" reason for eating bacon, people could smell a trap easily enough.

To some extent, PETA had to know what they were getting into, just like Twitter users knew that this was bound to be a one-sided discussion if Twitter had its way.

The glowing reviews for bacon started rolling in.

Sure, some people railed against it, but PETA's gotten a pretty bad rap in the past few years, so people tended to be a little antagonistic.

I mean, it's not true at all, but that's still a pretty fun take on the matter, isn't it?

That doesn't really answer PETA's question, but it was plenty funny.

Ron Swanson would definitely be on the pro-bacon side. And he might have more fans than PETA does.

This one gets a little meta.

Take your time to really think about it and see if you agree. It's a bold statement either way.

A picture says a thousand words.

Homer holding a bouquet of bacon instead of flowers can go a very long way towards settling an argument.

Louis C.K. has a strong stance.

Wow. I suppose this is a pretty compelling reason to enjoy bacon, now isn't it?

Fans of the show will get this and groan.

Those who aren't fans might just be reminded that, yes, sausage is delicious too.

An handy decision tree for whether or not you should enjoy some bacon.

It seems, uh, a little one-sided, now doesn't it? Maybe there's more to it than this.

See PETA? How does it feel to be judged and mocked? Not great, right? I wouldn't imagine so!

I'm not sure how sound this logic is, but it does remind us that, yes, people really like bacon!

Two words say it all.

Especially when they're placed next to a beaming and possibly stoned James Franco. So good, indeed.

People were quick to see the folly of PETA's ways.

In the past decade or so, PETA's become a divisive presence, alienating even like-minded people with their tactics and approach.

Looks like it backfired in more ways than one.

They reminded this guy that bacon exists, so he went ahead and fried some up. Nice work, PETA!

It was only a matter of time before this showed up, wasn't it?

DJ Khaled knows what's up. PETA may have gotten over their head here, but it's not all that uncommon a reaction to their social media posts.

PETA finally did fire back at this guy's obviously exaggerated claim.

But that's the best they could muster. I'm not sure they got the dialogue they were seeking with this post. Ouch.