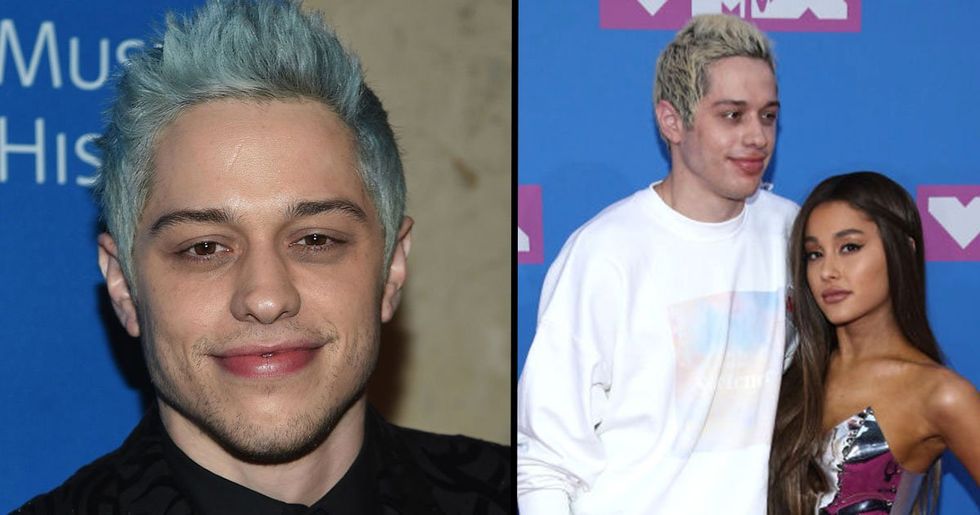 Pete Davidson Covers up Ariana Grande Tattoo With Something Brutal

Pete Davidson and Ariana Grande were, without doubt, the romance of summer 2018. The couple had it all: a pet pig, BDE, and, of course, many matching tattoos.

But it wasn't built to last. The couple called off their whirlwind engagement last October, and there has been ongoing drama between the failed lovers ever since.

With Twitter feuds, appeals to fans, and even entire music videos on the topic, the breakup has been almost as fascinating as the relationship. It had been unclear exactly what Pete planned to do with the most lasting memories of his ex-fiancee - his tatts. Until now.

Because Pete has gone for a pretty extreme cover-up of a tattoo he had which matched one of Ariana's. The new inking has made a big statement about how he feels about the breakdown of his high-profile relationship. We have to say, it seems pretty harsh.

This is Pete Davidson.

Davidson is probably best known for his work on Saturday Night Live.

He joined the cast in the premier of the shows 40th season, which began in September 2014. He was the first cast member to have been born in the '90s, and one of the youngest stars ever.

He had a slightly wacky, offbeat and out-there sense of humor which was always exciting to watch.

Davidson went on to star in several popular films.

He had a bit-part in 2015's Trainwreck, and a much bigger role in 2018 Netflix rom-com Set It Up.  He's also gained a loyal fan base and much media attention.

Although a part of that attention can probably be attributed to a certain relationship.

Davidson and pop-superstar Ariana Grande met in 2018, and became engaged super quickly, in the June of the same year.

The pair's fairly public romance captured the hearts of the world.

They seemed sickeningly cute together, and something about their fun, flirty and surprisingly chill relationship really touched the public.

Here's the pair with Bill Clinton in August.

This may actually be a contender for the "most 2018" picture ever taken. It seemed the world was Davidson and Grande's oyster.

They were the perfect odd couple.

There adorable PDAs, the fact that they almost immediately became engaged, plus the fact Grande dedicated and entire track to Davidson on her album Sweetener made them basically irresistible.

The pair were the definition of couple goals.

The fact that Grande and Davidson shared so much of their relationship on social media made us all feel weirdly as if we were a part of it, too.

And, as you can see, this is a man who isn't afraid of a little ink. In fact, both Grande and Davidson are big fans of body art.

We guess you can see where this is going.

As you may expect from a young couple of tattoo-enthusiasts who are crazy in love, the pair started getting inkings dedicated to one another. Here's Grande showing off her "always" tatt, which matches one Pete has on his back. It's reportedly a tribute to the couple's mutual love of Harry Potter.

Here's another of Grande's tributes to Davidson - a cursive scribbling of "Pete" on her ring finger - right next to that enormous rock.

Grande wasn't the only one getting tatted, though.

Davidson was also keen to make his relationship super permanent. Here he is with his "Dangerous Woman" bunny ears.

It's safe to say, for the pair, tattoos were another expression of their love.

As a couple, they both already had a passion for inking their bodies. So it seems only natural that the couple would want to commemorate their love in the best way they know how.

But the relationship wasn't built to last.

The pair announced their split in October 2018, much to the heartbreak of the internet. So the relationship wasn't permanent - but, unfortunately, tattoos are.

Grande commemorated the break up with this tune.

"Thank U, Next" was one of the biggest songs of 2018, and was an ode not just to Davidson, but to Grande's other high-profile relationships.

In the video, Grande looks over her memories with Davidson.

There's a picture of the couple with the caption, "Sry I dipped Pete. I love u always. HUUUUUGE." The accompanying lyrics are, "Even almost got married, and for Pete I'm so thankful."

However, it appear Davidson has commemorated the breakup in another way.

Some backstory. Grande has had this tattoo on the back of her neck for several years. It reads, "mille tendresse," which means "a thousand tendernesses."

The quote is a reference to Breakfast at Tiffany's.

The 1961 movie is reportedly one of Grande's favorites, and the whimsical and romantic nature of the tatt made it equally irresistible to Davidson.

But with the relationship ending soon after, it appears he may have regretted his decision rather quickly.

The image, shared by tattoo artist Jon Mesa, shows Davidson's back, which is covered in doodles. The image was intended to show off his new Tootsie Pop owl.

But fans noticed something else.

The "mille tendresse" tatt at the base of Davidson's neck has gone - and has been covered up with a cartoonish scrawl of the word "cursed." Harsh.

The internet had a mixed reaction to the tatt.

Some thought the message was incredibly cruel towards Grande, who has been nothing but kind about Davidson since the split.

However, some thought it said more about Davidson than it did Grande.

It seems he's keen to keep people talking about the relationship, while Grande has moved on to bigger and better things.

While it's undeniable that the pairing's careers both benefited from the relationship, since it ended, it seems Grande's has only been on the up since the split. The same can't really be said for Davidson.

Other eagle-eyed fans noticed something else.

It seems Davidson hasn't totally erased Grande from his back yet - as he still has the pair's matching "always" inking on full display.

Some even thought it might be a reference to Grande's smash hit.

Is the always from the thank you,next burn book the same always that pete davidson has as a tattoo? https://t.co/mErPMwOdih
— baby boo (@baby boo)1550042449.0

The "always" does appear to be in Grande's handwriting - so it looks like Davidson isn't quite ready to cover her up completely.

Davidson isn't the only one to have had a recent tattoo mishap.

For those who missed it, this is a reference to a tattoo error Grande recently made. She wanted to get "7 Rings" tattooed on her palm - but ended up writing something else entirely.

Davidson's new Tootsie Pop owl tatt looked awfully familiar to some - until they realised it bears a striking resemblance to the iconic Grande lollipop memes of last summer.

But not every great love story can work out.

We wish Davidson the best as he continues getting through the breakup. And, as a word of advice, stay away from the tattoo gun in the future!