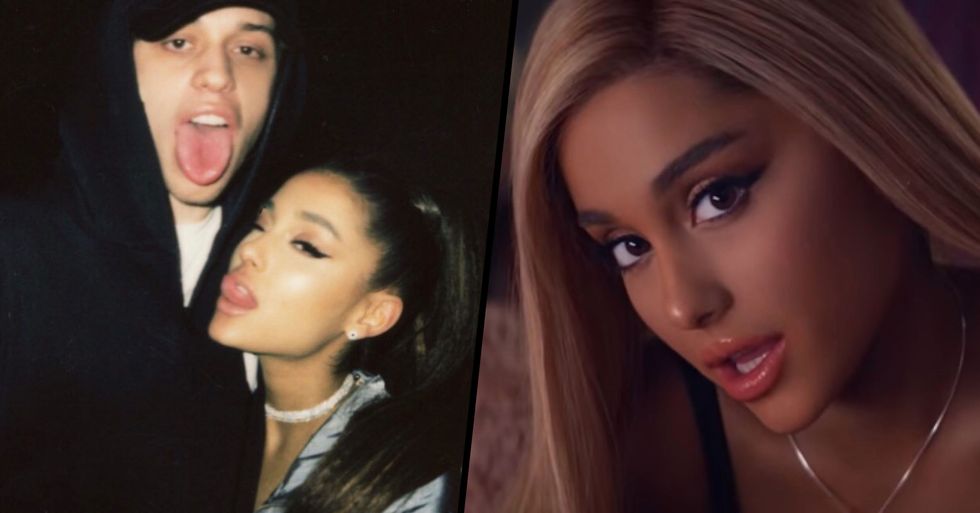 Pete Davidson and Ariana Grande were, without doubt, the romance of summer 2018. The couple had it all: a pet pig, BDE, and, of course, many matching tattoos.

But it wasn't built to last. The couple called off their whirlwind engagement in October of 2018 and there has been a lot of ongoing drama between the failed lovers ever since.

It's time to forget the cover-up tattoo as Pete has now dragged his ex for a very savage reason.

This is Pete Davidson...

Pete is probably best known for his work on Saturday Night Live...

He joined the cast in the premiere of the shows 40th season, which began in September 2014, and he was the first cast member to have been born in the '90s... making him one of the youngest stars ever.

And he has a slightly wacky, offbeat and out-there sense of humor which is always exciting to watch.

Davidson went on to star in several popular films.

He had a bit-part in 2015's Trainwreck, and a much bigger role in 2018 Netflix rom-com Set It Up.  He's also gained a loyal fan base and much media attention.

Although a part of that attention can probably be attributed to a certain relationship...

Pete and pop-superstar Ariana Grande met in 2018, and the pair became engaged super quickly in the June of the same year.

The pair's fairly public romance captured the hearts of the world...

They seemed sickeningly cute together, and something about their fun, flirty and surprisingly chill relationship really touched the public.

They were the perfect "odd" couple.

There adorable PDAs, the fact that they almost immediately became engaged, plus the fact Grande dedicated an entire track to Davidson on her album Sweetener made them basically irresistible.

The pair were both big fans of body art...

And each likes to express themselves through their inked up bodies.

We guess you can see where this is going...

As you may expect from a young couple of tattoo-enthusiasts who are crazy in love, the pair started getting inkings dedicated to one another. Here's Ariana showing off her "always" tatt, which matches one Pete has on his back (it's reportedly a tribute to the couple's mutual love of Harry Potter).

Here's another of Ariana's tributes to Pete - a cursive scribbling of "Pete" on her ring finger - right next to that enormous rock.

Ariana wasn't the only one getting tatted, though...

Pete was also keen to make his relationship super permanent. Here he is with his "Dangerous Woman" bunny ears.

But (believe it or not) the relationship wasn't built to last...

The pair announced their split in October 2018, much to the heartbreak of the internet. So the relationship wasn't permanent - but, unfortunately, tattoos are.

Ariana commemorated the break up with this tune...

"Thank U, Next" was one of the biggest songs of 2018, and was an ode not just to Pete, but to her other high-profile relationships.

In the video, Ariana looks over her memories with Pete...

There's a picture of the couple with the caption, "Sry I dipped Pete. I love u always. HUUUUUGE." The accompanying lyrics are, "Even almost got married, and for Pete, I'm so thankful."

However, it appeared that Pete commemorated the breakup in another way...

Here's the backstory... Ariana has had this tattoo on the back of her neck for several years and it reads, "mille tendresse," which means "a thousand tendernesses."

But with the relationship ending soon after, it appears he may have regretted his decision rather quickly.

So Pete decided to cover it up... and fast.

The image, shared by tattoo artist Jon Mesa, shows Pete's back, which is covered in doodles... the image was intended to show off his new Tootsie Pop owl.

But fans noticed something else...

The "mille tendresse" tatt at the base of Davidson's neck has gone - and has been covered up with a cartoonish scrawl of the word "cursed." Harsh.

It seems that the pair aren't on good terms afterall...

And Pete really isn't afraid of letting rip on his ex.

In July 2019, Ariana appeared on the front cover of Vogue...

And in an interview with the world-famous magazine, she opened up about her past relationships.

She briefly spoke of Pete...

"I met Pete, and it was an amazing distraction. It was frivolous and fun and insane and highly unrealistic, and I loved him, and I didn't know him," she said.

She described him as a mere distraction...

Now that's got to hurt!

And in the classic Pete Davidson style, he decided to address the matter in a stand-up performance on his new Netflix show, Alive From New York.

He mentioned Ariana more than once...

He firstly joked that Ariana was the one who made him famous and had turned him into a "household name"... which is kind of true, we suppose?

But when he recalled that she had referred to him as a "distraction"...

"Can you imagine if I did that?" Pete said of the interview.

"My career would be over tomorrow. If I spray-painted myself brown and hopped on the cover of Vogue magazine and just started s******* on my ex."

The audience both laughed and gasped...

"Something had to happen to her, there had to be some repercussions, right?" Pete continued.

"No, she won Billboard's Woman of the Year and I got called butthole eyes by Barstoolsports.com."

He also took aim at Ariana's fiercely loyal fan base...

"I don't want any smoke, OK? My biggest fear is I'm gonna get a shot in the back of the head by a nine-year-old with a ponytail, and the last thing I'm gonna hear is, 'Hashtag canceled'."

If Pete knows one thing...

He knows how to truly troll someone.

But in the meantime, keep scrolling to see the heartbreaking tweet Ariana posted after Pete blocked her on socials...