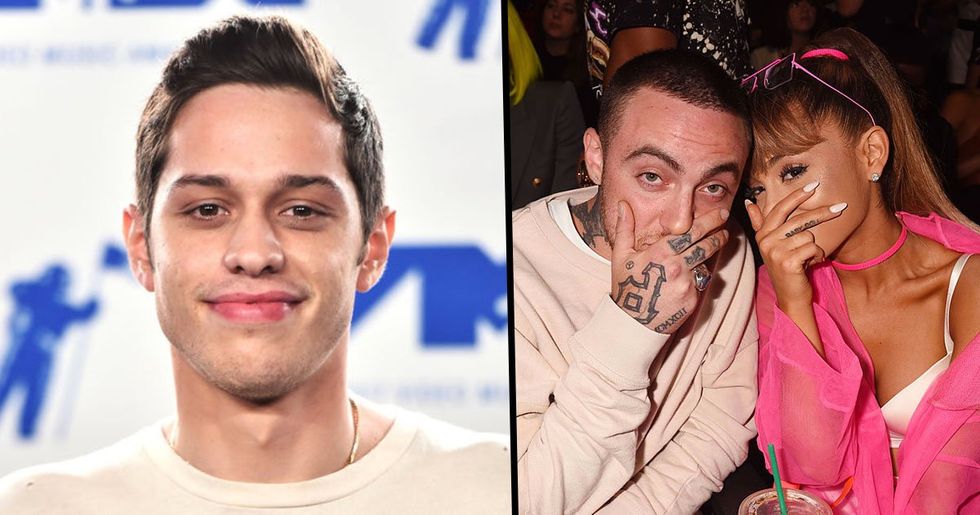 Life's been difficult for the comedian, and not just over the past few months.

His father died when he was 7. He contemplated suicide. He was diagnosed with Chron's disease and borderline personality disorder. He dealt with drug abuse and trips to rehab.

Then Ariana Grande ended their engagement.

Ariana's long-term ex-boyfriend Mac Miller's death made her reconsider their relationship. Crippled with grief, she was in no state to plan a wedding.

Soon after the break-up, Pete posted a worrisome message on Instagram, possibly of suicidal nature. Thankfully, he survived the day, and has now returned to stand-up.

Pete's experiences changed his view of comedy and crossing the line. That's why, when a rude audience member in his most recent show made a joke about Mac Miller's death, Pete didn't look past it.

Working with the audience, he kicked him out.

Luckily, TMZ managed to obtain an audio of Pete getting rid of the guy.

Pete Davidson is best known for his SNL skits.

Over the past four years, at only 24, he has become one of their most valuable comedians, Variety says. Pete found his voice on the Weekend Update skits, sitting next to anchors Colin Jost and Michael Che.

“I’ll rant, and I listen to it and pick the best chunks," he said.

“They’ll be like, ‘Cool, use that.’" These bits have become some of SNL fans’ favorites on Youtube.

“He has real support in the audience," said the show’s executive producer Lorne Michaels.

“People love him." Pete is known for his dark jokes, which he often draws from the worst times in his life.

At just 7 years old, he lost his firefighter dad in the 9/11 attacks.

He often struggled to fit in and even contemplated suicide. In high school, Pete was diagnosed with Crohn’s disease, which led him to chronic marijuana use.

He went to rehab twice, where he found out he also suffered from borderline personality disorder.

He told Variety that “with new medication, he’s stable (and smoking again)." “The last few years have been real rough with me," he said.

“I took all these mental health classes and really spent a lot of time getting me good."

Pete’s career in comedy began when he was still a teen. He would usually perform at the bowling alley/comedy club The Looney Bin.

Back then, his jokes were already very personal and based on his life.

This bravery is what gave Pete roles in several movies and TV shows. However, the real turning point for him came after the movie Trainwreck, in which he played a hospital patient. It was a small part but it was enough for his co-star Bill Hader to see talent in him, and so he recommended Pete to SNL.

But it was from the moment he got engaged to the queen of pop, Ariana Grande, that every person in the world knew his name.

Pete told Variety that he’d never planned to get married. “I never thought I’d meet anyone like her," he explained.

“I can’t even put into words how great of a person she is. I could cry. She’s the f—ing coolest, hottest, nicest person I’ve ever met."

If the 12-year-old Pete could have seen him then, he would have said, “I’m f—ing living the goddamn dream."

But the dream collapsed when Ariana ended their engagement.

The months that followed really had a toll on Pete. Only recently, NME says, did he return to doing stand-up.

Not long after the split, Pete raised concern when he posted on Instagram, saying he didn’t “want to be on this earth anymore."

Thankfully, he made it through and returned to stand-up in January. Later, he even discussed the message on SNL.

All of these experiences and dealing with them in the public eye changed Pete’s sense of humor.

Daily Mail says, Pete’s jokes went from grim and ironic to deeper and much more thoughtful.

One example of the insensitive “gallows Pete" was his roast of Justin Bieber on Comedy Central, 2015.

According to Variety, the network had to edit out some of the jokes he made about late actor Paul Walker who died in a car crash in 2013.

This is what he said about Bieber that triggered everyone listening.

“Just this past year, Justin got arrested for drag racing - unfortunately, it wasn’t with Paul Walker."

The crowd booed in response.

Pete replied, “What? He’s doing great! He’s got a movie coming out," referring to Furious 7, which was Walker’s last performance and was shot before his death.

It seems Pete has learned from his mistakes, developing a better sense of what’s appropriate and what’s not.

A few days ago, Pete kicked out a member of the audience from his stand-up show after he joked about rapper Mac Miller‘s death.

The report stated that Miller had consumed a lethal mix of fentanyl, cocaine and alcohol.

His death shocked everybody. Many artists and other celebrities expressed their grief and condolences to Miller’s family, friends, and fans.

The news were especially devastating to his long-term ex-girlfriend Ariana Grande.

Alt Press also says the rapper left an EP for his fans before his unexpected death. “The artist recorded two singles for a new Spotify session called Spotify Singles."

“The two-song EP was officially released back in November with a slowed down, version of his track “Dunno" from 2018’s Swimming."

Miller had also recorded a cover of Billy Preston’s “Nothing From Nothing," originally released in 1974.

So when Pete heard the audience member make such an insensitive joke about Miller’s death, he wasn’t going to just let it go.

According to Page Six, Pete started off the show with classic Pete’s dark humor. “So a funny thing happened to me recently in my apartment … my friend died of a heart attack," he began. Immediately, someone in the crowd yelled out, “Mac Miller!"

The same Miller who had just died 4 months ago.

Even though Pete is no longer with Ariana Grande, he still remembers how much the news broke her.

.@liamaathews cackling at the sight of Pete Davidson in The Dirt trailer is the sound of true joy https://t.co/hkH976Iwve
— Sadie Gennis (@Sadie Gennis)1550590778.0

“Pete calmly stops his routine and asks the audience to ID the dude that yelled out and that he is going to have to leave." “He then asks security to locate the yeller and escort him out."

Pete also added, “And give him back his money. I don’t want his money."

The source said that, at first, the audience was “a bit bewildered," wondering if Pete was joking.

When they realized he was not, “they start pointing to where the yell came from."

Pete said, “I’m serious. I’m going to leave [the stage]. So if you want to hear the rest of the show, you’ll point out to security who yelled so they can escort him out."

“If not, I’m going to leave right now. I’m not going to have any of that s–t happening at my show."

The audience worked with Pete and eventually identified the man. Security then walked him out “without further drama."

But then he changed his mind and added, “Nah, go ahead, applaud — applaud security for getting him out. They do a great job."

“The entire episode, from the yell to when the show resumed, lasted about five minutes," said the source.

Pete returned to his introductory joke, which turned out to be about how Pete once walked into his apartment and found his friend passed out, but mistook it for a heart attack.

TMZ managed to get the audio of Pete dealing with the situation.

In it, you can hear him immediately stop the performance and ask the audience to point to the “fuckface" who made the horrible joke so that security could get him out.