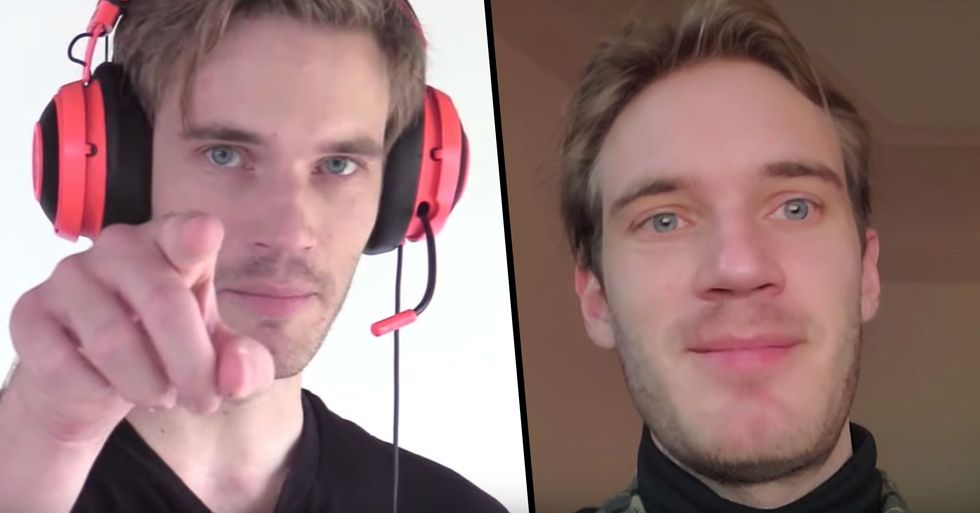 PewDiePie is one of the most famous YouTubers on the planet, and the Swedish blogger has made quite a name for himself.

His Youtube journey and this year haven't exactly been smooth sailing for him and his wife, Marzia, and he has ultimately made an announcement of a "break from Youtube".

Pewdiepie has become one of the biggest YouTubers of our time.

The Swedish vlogger, whose real name is Felix Kjellberg, became the first YouTuber to reach the seventy million subscriber mark, and now has over ninety-nine million subscribers, making him the most successful person on YouTube.

He is best known for his commentary videos on various video games.

And his content has gradually expanded into coverage and commentary of internet memes and viral videos.

Though he hasn't been shy of controversy.

The vlogger has long attracted negative attention and criticism for some slightly questionable remarks that he has made in the past.

He has been accused of making anti-Semitic comments in several of his videos.

And several of his other actions have ruffled feathers for the same reason.

Many of PewDiePie's other videos have sparked a similar outcry. In one of these, he performed a Nazi “heil" salute, and, in another, he hired a pair of performers from a freelancer website to hold up a sign reading “Death to all Jews."

But he defended himself and said that those videos were satirical, though many observers still condemned them as anti-Semitic.

The YouTuber doesn't have the cleanest of slates, but, regardless of all his controversy, he has reached ridiculous levels of success and still has a very firm and loyal fan-base.

He has had the unwavering support of his wife, Marzia Kjellberg.

Mariza is a vlogger herself.

And, the Italian fashion designer has her own personal fan-base, with around 5 million subscribing to her YouTube account. Talk about a power-couple...

Their romance blossomed when Marzia's best friend, Diazo, watched PewDiePie's videos and e-mailed Marzia the link to these videos, knowing that she'd like them.

The happy couple tied the knot in August of this year...

And they now live in their home together in Brighton, in the U.K.

They honeymooned in Bali...

Though the trip was gifted to them, the 2 shared some wonderful posts from their time in Thailand... A classic destination for newlyweds.

Another great vacation spot. However, things took a turn for the worst when Marzia opened a package of knives.

Amongst stunning pictures of Japan, came this shot.

This knife was posted onto Marzia's story because, apparently, as the social media star was opening the packaging, the handle slipped out of her grip and fell point down straight onto her barefoot, impaling her toe. Doesn't sound fun at all, does it?

She also mentioned that there was "lots of blood."

The newlywed warned her fans that they should "be careful while handling knives." Good advice...

But despite the bloody incident in Japan...

The couple decided to buy their very own home in the beautiful country.

There was even more trouble in paradise for the newly-weds...

Earlier this month, Marzia opened up on Instagram about how their home in Japan was burgled and a lot of their possessions were stolen.

Marzia was clearly devastated by the break-in...

"Our house was broken into and they took ninety percent of my valuables, from my jewelry to luxury goods and special items I’ve been collecting over the years," she wrote on her Instagram story. "It’s all gone."

As anybody would be, the couple were pretty upset over the whole ordeal.

"I know it is very materialistic and should be happy with what I was left/have. But I can’t hide the shock and sadness with all being taken away, just like that," she went on to say.

But in a classic PewDiePie fashion...

He decided to poke fun at the situation by posting on social media of himself sporting a burglar mask and a baseball bat, saying, "Gonna tell my kids this is the guy that burgled my house."

The couple seem to be healing and recovering from their traumatic ordeal...

But PewDiePie has now made an unexpected announcement.

In his most recent PewNews video...

He explained to his viewers that he will be going on hiatus in the New Year.

His decision has already been made...

"I am taking a break from YouTube next year. I wanted to say it in advance because I made up my mind," he explained.

He admitted to feeling "very tired"...

He added, "I'm tired. I'm feeling very tired. I don't know if you can tell. Just so you know, early next year I'll be away for a little while. I'll explain that later but I wanted to give a heads up."

PewDiePie had already made hints earlier this year...

Back in August, he said in a video, "I do think it would be good for me to take a break at some point. It would be nice to not have YouTube in my brain for the first time in ten years."

Perhaps some time away from the online world is what the couple need...

And we hope that PewDiePie's decision to take a year off from YouTube will give him a chance to recharge and reconnect with his personal life.