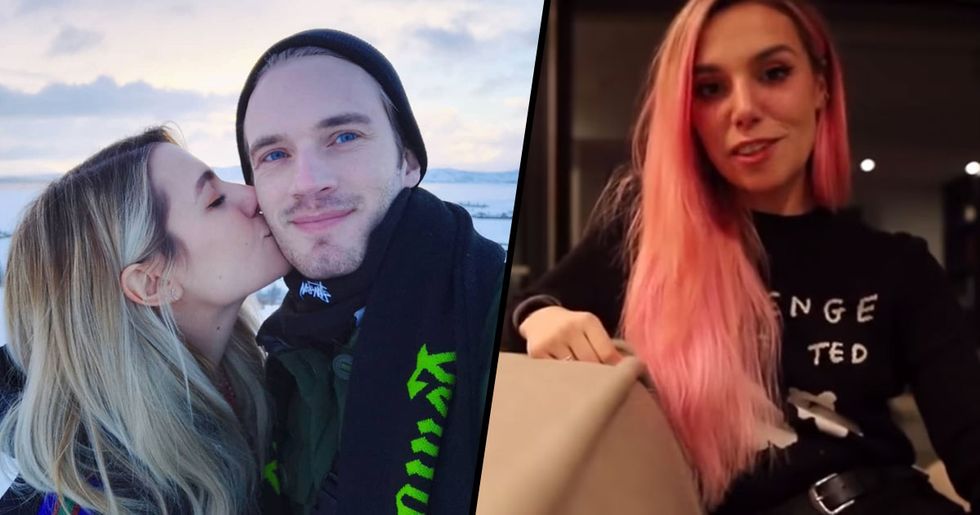 Recently, Swedish YouTube sensation, Pewdiepie, has married his long-term partner, Marzia Bisognin. The pair, who have been dating for almost a decade, finally tied the knot in a gorgeous woodland wedding and he was quick to share his happy news, alongside some stunning photos from the ceremony to his 18.3 million Twitter followers.

However, on their romantic vacation in Japan, Marzia was involved in a knife-incident that left her fans really worried.

Keep reading to hear all about the couple, as well as the injury Marzia suffered at the hands of a blade.

Pewdiepie has become one of the biggest YouTubers of our time.

The Swedish vlogger, whose real name is Felix Kjellberg, became the first YouTuber to reach the seventy million subscriber mark, and now has over ninety-nine million subscribers, making him the most successful person on YouTube.

He is best known for his commentary videos on various video games.

And his content has gradually expanded into coverage and commentary of internet memes and viral videos.

Though he hasn't been shy of controversy.

The vlogger has long attracted negative attention and criticism for some slightly questionable remarks that he has made in the past.

He has been accused of making anti-Semitic comments in several of his videos.

And several of his other actions have ruffled feathers for the same reason.

Many of PewDiePie's other videos have sparked a similar outcry. In one of these, he performed a Nazi “heil" salute, and, in another, he hired a pair of performers from a freelancer website to hold up a sign reading “Death to all Jews."

But he defended himself and said that those videos were satirical, though many observers still condemned them as anti-Semitic.

The YouTuber doesn't have the cleanest of slates, but, regardless of all his controversy, he has reached ridiculous levels of success and still has a very firm and loyal fan-base.

He has had the unwavering support of his long-term girlfriend, Marzia Bognin.

Mariza is a vlogger herself.

And, the Italian fashion designer has her own personal fan-base, with around 5 million subscribing to her YouTube account. Talk about a power-couple...

The couple have been dating since 2011.

Their romance blossomed when Marzia's best friend, Diazo, watched PewDiePie's videos and e-mailed Marzia the link to these videos, knowing that she'd like them.

She first got in touch with Felix via letter...

She stated that she thought that he was funny and explained how much she enjoyed his videos. He wrote back and they began communication through Facebook until Felix finally traveled to Italy to meet her in person.

In the past 8 years, the couple have traveled the world together, and have since relocated to Brighton, U.K, where they share a home.

And now, they are officially husband and wife.

The couple each shared the news on their social media accounts, and posted pictures of their big day, which was set in a gorgeous woodland setting.

The photos are beautiful.

Felix dons a classic black suit, while Mariza is seen wearing an elegant lace, ivory wedding dress. Felix wrote: "We are married!!! I'm the happiest I can be. I'm so lucky to share my life with this amazing woman."

The couple seem to be over-the-moon.

And, in a post on her own Instagram account, Mariza wrote: "Yesterday, the 19th of August - after exactly 8 years since we met - we celebrated our wedding with our closest friends and family. It was the most beautiful day, which I will treasure forever. I am so thankful for all the people that made time to attend the event and helped us celebrate our marriage."

The bride and groom couldn't be happier.

She concluded her emotional post with: "I feel like I'm the luckiest person and I'm so full of love. Incredibly ecstatic to be able to call Felix my husband for the rest of our lives."

And so far, things seem to be going very well.

The duo have since been moving forward together as a married couple, embarking on adventures all around the globe.

Their first stop was Bali, where they had their honeymoon.

Though the trip was gifted to them, the two shared some wonderful posts from their time in Thailand. A classic destination for newlyweds.

Another great vacation spot. However, things took a turn for the worst when Marzia opened a package of knives.

Amongst stunning pictures of Japan, came this shot.

This knife was posted onto Marzia's story because, apparently, as the social media star was opening the packaging, the handle slipped out of her grip and fell point down straight onto her barefoot, impaling her toe. Doesn't sound fun at all, does it?

She also mentioned that there was "lots of blood."

The newlywed warned her fans that they should "be careful while handling knives." Good advice.

Fans were quick to jump on the post, offering their support.

She went onto thank her fans saying: "Thank you all for worrying about the toe. It is a very dark purple color near the cut, so it’s not looking pretty but I’ve been able to walk all day so I assume it’s not that serious. I’m hoping it will heal on its own."

Even though this gruesome accident occurred, the couple are enjoying their time in Japan.

"I’m enjoying experiencing autumn in Tokyo for the first time… it is much warmer than you would expect!" And if you just can't get enough of celebrity weddings, then keep scrolling to read all about The Rock's amazing, secret wedding to Lauren Hashian.