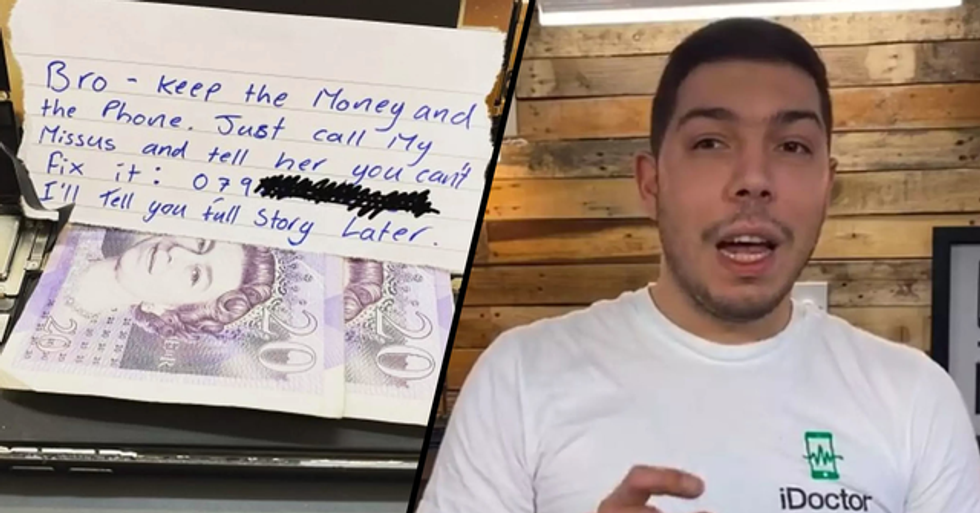 We love an internet mystery - but this one is just too weird for words.

A phone repair worker from Sheffield, U.K. received a very odd request from a customer - and received payment for not fixing a phone. Why? Well, he still doesn't quite know ...

The internet loves a mystery.

Trying to figure out the solution to a bizarre or nonsensical problem is great fun, after all.

And when something weird is shared online?

Well, it sort of brings us all together to find the solution to the puzzle.

But there's one that has really captured the internet's attention this week.

Because nobody can figure out what on earth it all means!

It involves a phone repair.

Or, more accurately, it doesn't involve a phone repair.

Because one phone repair worker in the U.K. received a hefty payout.

It just came with one caveat - do not fix the phone. What?

This is Oli Pickles.

And he was the recipient of a rather weird request while at work at a phone repair shop in Sheffield, U.K.

A customer came in with a smashed phone and offered him around $50.

But upon closer inspection, Oli noticed something odd about the phone he'd been given.

There was a note concealed in the back of the phone.

"Bro - keep the money and the phone. Just call my missus and tell her you can't fix it. I'll tell you full story later."

Oli did as he was told.

He left the busted phone well alone and called the woman to say it could not be fixed.

The woman thanked him anyway.

Leaving Oli with many questions as to what was actually going on.

What was even weirder?

The amount of money left wasn't even enough to fix the phone - which costs around $100.

Plus, the mystery is still unsolved.

The man promised to fill in the story later - but never got back to Oli.

Although the man may have wanted to add an extra caveat to the note.

Such as, "please don't share this on social media for the world to speculate about." Oops.

Oli claims to have been suspicious of the customer from the start.

"I've been fixing phones for six years and have never been paid not to get one going again. It's the strangest thing that's ever happened to me," he told the Daily Mail.

"I don't know what this customer was trying to hide but clearly he wanted to keep it secret from his partner."

"It must have been so important that he was willing to pay for it. Normally, people are desperate to get their mobiles working again but not him."

"When he handed over the phone I just had a feeling that he wasn't coming back."

"There was something not right about him and he was acting quite shifty."

"He just dumped the phone on me and couldn't get rid of it quick enough."

"I told him to come back in two hours but I knew deep down that it wasn't going to happen."

"This customer only left me £40 so it's not worth my time to sort it out."

"I'm not sure what I'm going to do with the money either. The whole thing is just a bit weird."

At least he got paid for his (non-) work.

And he got a good story out of it, too.

"I've been thinking about what this customer might have been getting up to."

"I just can't work it out, but it does make me laugh." At least Oli did (pretty much) what the customer asked for. One waiter landed in hot water recently for ignoring his customer's order...