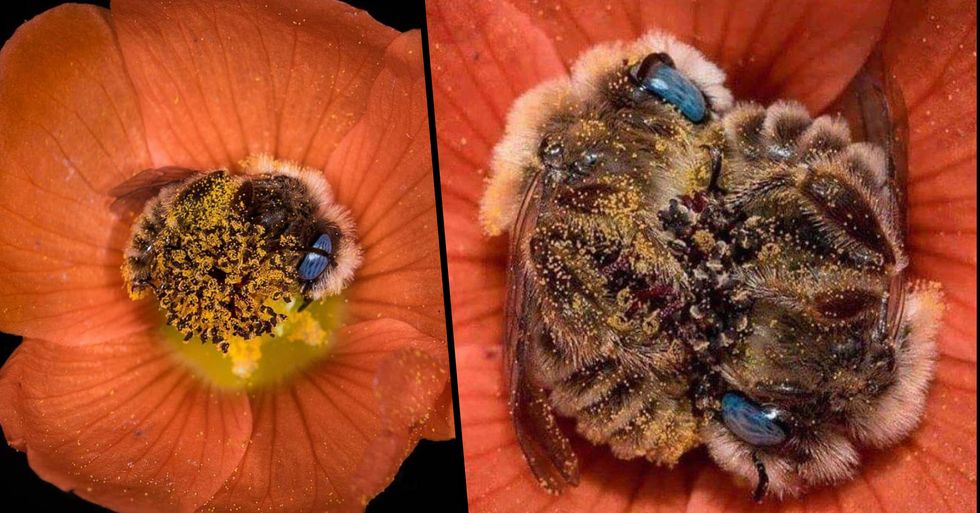 As powerful as humans feel, we often forget that we are merely spectacles compared to how vast our planet is. And Mother Nature always has a way of rendering us all speechless. Her beauty can only be captured by talented photographers with a keen eye.

Joe Neely quickly gained popularity because of how beautifully raw his work is.

Keep scrolling to see his amazing shots of a group of bees snuggling into a flower for a nap as well as some of his other photographs...

There's no justice any camera lens can do to a landscape or a wild animal.

But one photographer may have just managed to do it.

Joe Neely is an international wildlife photographer with an eye for beauty and his pictures really show off his talent.

This is "the Milkyway over the cities of Maui, Hawaii as seen from the top of Haleakala volcano at near 10,000 feet elevation."

If you thought that one was amazing, then check this one out:

This is "Orion's Belt, the Milkyway, and Betelgeuse as seen from the top of a Haleakala Volcano at 10,000 feet elevation. The sky is so clear up here that I shot this at 3200 iso. The star Betelgeuse, to the left of Orion's belt, has been diming and it has been in headlines of some news sources in the past few weeks. Scientists claim that it may be about to go supernova and we might see it happen."

Check out this stunning shot.

And it only gets better with this one...

"Red sand beach, not as popular as black sand beach so there was almost no one here. Incredible waters and colors."

Have you ever seen anything so beautiful?

"Some say that the biggest cliche in photography is a sunrise. I see it as a chance to receive the day renewed, reborn, in all its glory, and in all its wonder."

He also photographs wild animals in their natural habitats...

He tends to focus on the little details...

He wrote this: "When I look into the eyes of an animal, I do not just see an animal. I see a living being. I see a friend. I feel a soul."

He always seems to find himself in the right place, at the right time.

He claims that these "thugs" ran him off the road. What a great photograph.

It takes a special kind of talent to do what he does...

He really knows how to capture nature in the best way.

One of his specialties is capturing even the smallest of animals...

It's almost as you're watching them in front of you...

However, his most reoccurring obsession seems to be bees.

The little creatures are crucial to maintaining wildlife. They are perfectly adapted to pollinate, helping plants grow, breed and produce food – they do so by transferring pollen between flowering plants and, as a result, keep the cycle of life turning.

So it's no wonder they have become somewhat of a muse for Neely.

Here are some of my favorite bee pictures by him, including one special image that you'll never believe is real. Read on to see it.

The attention to detail is literally amazing.

This is a honeybee. Neely recalled this in his caption: "A single honeybee brain has a million neurons compared with 100 billion in a human. But, researchers report, bees can recognize faces. That's right, Bees have their own “facial recognition software," and can recognize human faces. How cool is that?"

But one photograph has stolen the top spot as his best photograph yet...

And it involves sleeping bees.

Once he uploaded the photograph to his socials, it immediately flooded with comments.

Check out the first photo:

Here the bees start settling down...

And this is the zoomed-in version of them snuggling up with each other.

If you're in the mood to see more amazing wildlife photos, then keep scrolling.

Have a look at these rare photos of polar bears playing in a field of flowers...