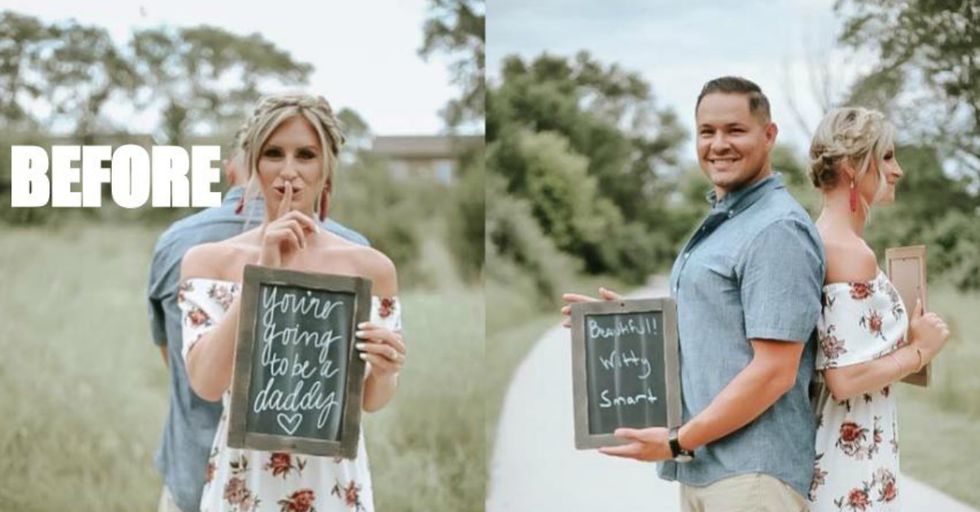 Sharing exciting news with a loved one is something you never forget, and it's not often that we're able to capture that exact moment on film.

But one clever woman from Nebraska was able to do just that, and the photos are nothing short of spectacular. Ready for some happy tears? Keep scrolling to see how this husband reacts to some seriously joyous news.

On June 22, Chelsie Morales set up a photoshoot for her and her husband, Will.

The photos were taken by Kara Fishbaugh of Kara Quinn Photography.

Will was told that they'd won a couple's photography session.

But the truth was much more exciting. Chelsie was pregnant, and wanted an extra-special way to reveal to Will that he was going to be a dad.

Chelsie had only known for four days before the shoot that she was expecting.

Will was told that the photoshoot would involve the couple standing back to back and writing three words on a chalkboard to describe their spouse.

To describe his wife, Will wrote the words “beautiful," “witty" and “smart" on his chalkboard.

Chelsie wrote, "You’re going to be a daddy" on hers.

When the big reveal happened, it seemed to take Will a bit to fully comprehend what the board said.

But when it finally hit him...

...it was a seriously heartwarming moment.

You can see the sheer joy on his face in these photos.

In an interview with Huffington Post, Chelsie talked about how amazing Will's reaction was.

“He went from pure shock to being completely overjoyed with tears flowing," Chelsie told HuffPost. “Throughout the whole shoot he just had the biggest grin on his face and kept repeating, ‘I just can’t believe it!’"

The photographer, who is a childhood friend of Chelsie's, talked about how much she loved being involved in such a wonderful moment.

“I was able to witness someone’s entire life changing right in front of me," Kara said to HuffPost.

Chelsie went on to tell HuffPost about how much Will loves little ones.

“If you ask anyone that knows him, he is just amazing with kids," she said. “If there is a baby around, 100 percent guaranteed it will take him .01 seconds to find it and ask if he can hold it, so I knew he would be more than thrilled once we were starting a family of our own."

When Huffington Post asked Chelsie what words she would have written to describe Will...

Her answer was, “Driven, genuine and doting."

The couple's baby is due on February 23.