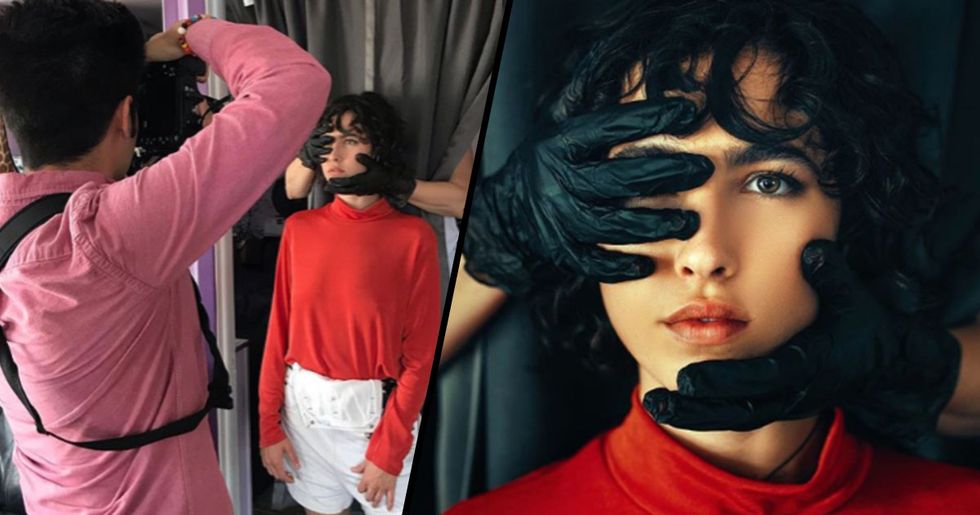 At twenty-two years old, Chris Hernandez has already made quite a name for himself in the world of photography.

The Florida-based photographer has over 100,000 followers on Instagram and counting. Hernandez became popular for creating playful shots, taking his subjects into weird and wacky realms. That being said, Hernandez has also gained notoriety for displaying the often banal and basic settings that he shoots his models in. By displaying the necessary layering of Photoshop required to make the ordinary extraordinary, Hernadez has inadvertently revealed photographers best-kept secrets.

His series of before and after shots prove just how powerful Photoshop can be in turning an average situation into a work of art.

If you're a budding photographer and want to be inspired by someone who can turn a puddle into a glamorous water-shoot, continue scrolling.

Or if, like me, you just love to see what goes on behind-the-scenes and be reminded that the world is not as perfect as it seems in photos, then continue scrolling.

Hernandez takes his models into the natural world.

Some leafy cacti on the side of the road? Ideal! Trust... Hernandez knows what he's doing.

If there's one thing that Hernandez has a knack for, it's choosing the perfect background for his shots.

Now, out of context, this shot looks a little weird...

Sure, seeing a model, head tilted, nose bloody, hunched over a glass of red wine does look a little strange.

I don't how he does it. From the other angle, the situation seemed pretty strange, but a careful bit of Photoshop to make the colors pop and the softening of the background means that this shot now oozes glamour.

An electric fan and a stack of paper...

Getting his "assistant" to stand on a chair and throw faded, yellow paper into the direction of his model, it's clear that Hernandez has a very specific idea with this one.

The idea certainly paid off.

Semi-reminiscent of that scene in Harry Potter and the Sorcerer's Stone when all of the Hogwarts letters come through the chimney... this shot screams "there's a story there" - when, in reality, the actual story is pretty banal.

A quick trip to the supermarket?

Now, from this angle, the posing in front of the beer fridge looks sort of... odd. This one is truly a demonstration of the power of Photoshop.

The popping colors, the different textures, the angle... despite how unimpressive it looked before, there's no denying how impressive the final result of Hernandez's efforts is.

Gloomy day at the beach.

You certainly wouldn't look at a sky like that and think "let's head to the beach!" That being said, Hernandez took total advantage of the stormy weather to create yet another striking shot...

The contrast between the stormy sky and the bright colors creates a fantastic shot.

Capturing the lightening while relying on the aid of Photoshop to warm up the rest of the shot means that Hernandez was able to achieve a really interesting, contrasting shot.

Any model will tell you that shriveling up in cold bathwater is never fun.

And it must have also proved tricky for Hernandez to balance his expensive camera over the tub - Lord knows that, for the model patiently sitting in cooling bathwater until he got the perfect shot, must have been difficult.

A bit of Photoshop can mask a chill.

This model doesn't look chilly at all! In fact, the final image makes it seem as though the picture was taken in a warm, tropical country. The setting was certainly worth it though, it has cool '60s vibes and really works well to create the vivid image.

Strangled by a photobooth?

Now Hernandez was really thinking out of the box with this one...

That being said, the final shot is a work of art.

The folds of black material made from the photobooth curtain create a stylish air of mystery which nicely compliments the leathered gloved hands. The warm color which is given to the model's skin and top, thanks to Photoshop, perfectly contrasts with the darker colors, creating this iconic image.

Wherever there's foliage, there's an opportunity

Don't forget what Hernandez achieved with the roadside foliage earlier...

This striking final edit is worlds away from the standard backdrop. The success of this image all comes down to the framing and the introduction of sunlight between the leaves.

Arcades are a photographer's dream.

That being said, before Hernandez took Photoshop to this scene, it does, admittedly, leave a lot to be imagined.

Hernandez, with the help of Photoshop, created an arcade dreamworld.

It's hard to believe that it's even the same arcade! But I guess that it just shows you how powerful the photo-editing tool can be in changing how we can perceive an image. It's like magic. Camera magic.

Now I'm not sure if this is a kid's store display or something...

That being said, either way, it doesn't seem terribly impressive or artistically ambitious at this point.

With the model's red hair matching the red of the hot air balloons and her turquoise dress matching the backdrop perfectly, the shot is the ideal example of coordination and creating the perfect space for an aesthetic pic.

Snow White and her twin sister?

This fairytale-like image takes you into another world.

A girl chilling on her own holding an apple against an old looking mirror - I'm guessing that she was duplicated through the magic of Photoshop...

Ice cubes all over the place and a girl crouching underneath it... what's going on here?

To create this ice-queen image, Hernandez got creative and used a glass table and some ice cubes to create this breathtaking shot -  that brings a whole new meaning to "frosted glass."

Hernandez sure knows how to use foliage to his advantage.

By now, you've gotta know that he'll do something fantastic with all of that greenery potential.

And there you have it!

Using the natural elements of the local woods, Hernandez was able to create a mythical shot that seems to be taken from the shot of a high budget movie.

Another "sunny" day at the beach...

I wonder if Hernandez has ever been to the beach when the sun was soaring in the sky... I guess it's probably too packed for his liking then...

Check out that sky!

This image shows that we can never believe anything we see. Next time you see a snap of your ex frolicking on the beach, just think about how it might have actually been super miserable and they've probably just used a nice filter.

... Wonder what Hernandez has in store for us here. I think the apple/arrow thing is a bit of a clue.

I wasn't expecting that!

How has Hernandez made perching next to a damp river bed look seductive?

This looks just like the park by my house.

Any budding photographers should really take note of how Hernandez uses the every day, banal settings that we all have access to. The difference between Hernandez's work and when I try to take a photo is that he has a skill for driving out the potential beauty hidden in the ordinary.

Once again, Hernandez frames the backdrop perfectly to create a striking composition for his model.

This just looks like a classic "getting your boyf to get your vacation profile pic" shot.

Well, if you trust Hernandez's talents, by now, you'll know that this shot will be much more spectacular than your average boating vacation snap.

The model's head is perfectly aligned with the upcoming overhead bridge and the greens of the trees seep into the greens of the water in a beautifully complementary way that serves to ensure that the model is the central focus. Nicely done, Hernandez.

Now this one looks like an outtake from Dexter.

Surely, there must be a reasonable explanation for putting plastic wrap over his model...

It's really fascinating how light can completely change the perspective of an image. I guess that's why people always comment on "good lighting" in public bathrooms - I always wondered what that was about!

The scene of a crash?

Hernandez really does seem to be in much darker situations when you see his photography shoots out of context...

Yet, every time, he delivers truly remarkable work.

Who would've thought that the broken glass of a beat-up truck could prove such an interesting frame for his model? Hernadez thought so, of course!

Spying on the neighbors?

Hernandez used a simple white bathroom to take this shot. His focus is the model and the simple backdrop is intended not to distract from her.

Color bounces of the white walls creating a layered effect.

Inserting greens to the shadows using Photoshop, Hernandez creates an interesting contrast to the model's pink makeup and outfit. The result is a mysterious, foreboding shot that displays Hernandez's sheer talent.