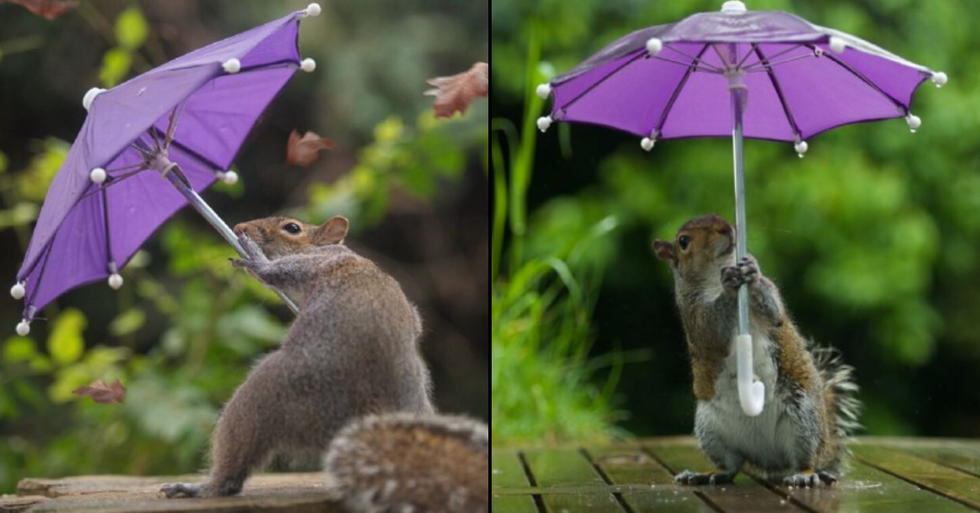 A wildlife photographer has recently blown people away with his latest shots. He's captured squirrels in all manner of surreal positions - and now he's explained how he got the incredible shots.

Well, this one eating an acorn-taco is pretty cool, anyway.

The thing with squirrels is they're really fast.

It's difficult to catch them close up because they run away devilishly quick.

But they're no competition for Max Ellis.

This is one dude who doesn't seem to have much trouble capturing squirrels in the wild.

There are some skillful squirrel photographers out there.

This picture of a flying red squirrel by Dick Van Dujin is breathtaking (and if you think this is impressive, wait till you see the next few shots!).

He tends to focus primarily on different breeds of deer.

But there's a particular series of pictures that has really captured the internet's attention.

Ellis has been capturing hilarious (and slightly surreal) images of squirrels.

And many naturally assumed that these images simply must be faked.

And now Ellis has revealed to UNILAD how he captured these incredible shots.

And is not willing to let any photo editing software take credit for his talent!

But these are just regular old squirrels.

They're not specially trained - just curious!

So rather than editing the pics...

Ellis just allowed the animals' natural curiosity do the work.

He just put out the props...

And waited until the squirrels couldn't resist any longer.

Sometimes he uses nuts to tempt them.

But often, the squirrels are interested enough without the need for food.

It's a painstaking process.

He often has to wait days until the squirrels begin to interact with the props.

But he thinks the results are worth the wait.

And we have to agree!

But there was one picture in particular which captured the internet's attention.

The infamous shot shows a squirrel struggling with an umbrella on a gusty day.

And he's revealed how he got the shot.

"I often build a shelter for the squirrels on rainy days and I’d left the umbrella up."

"The squirrels are used to poking around looking for nuts in anything I leave out, and eventually one got into the right position."

"I’d set up a platform with dead leaves on it next to the umbrella… to [add] a bit of context, as you can’t see wind."

"You’ve got to have the right weather and the right animals who are comfortable with the props."

"I edit very little. At most I get rid of any fishing line or wire as it’s distracting."

"That’s one of the most annoying things, everyone thinks I simply Photoshop these images together – that would be a lot easier!"

What an incredible talent! And for more amazing animal photography, scroll on for one grandma and her pet dog.