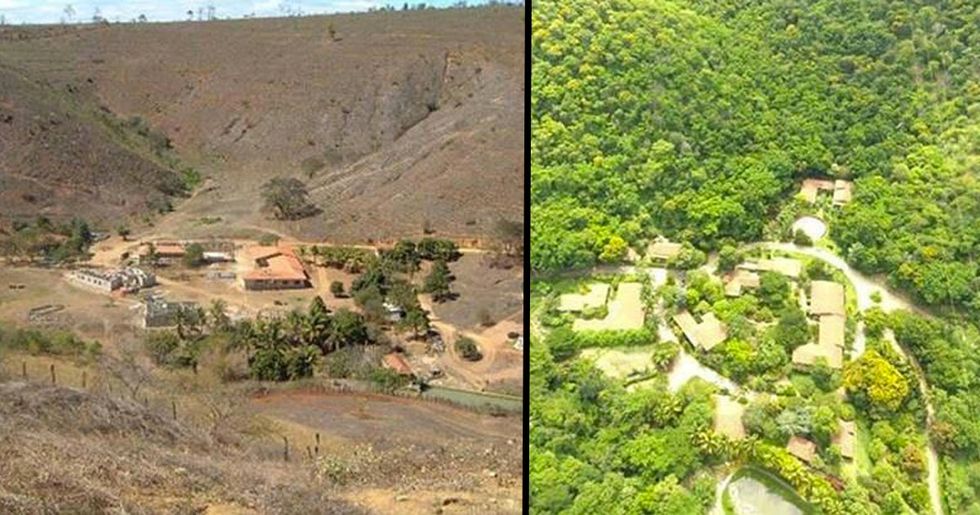 Our world is a beautiful and truly extraordinary place…

But for all this, it seems that we still continue to neglect it as our home, happily contributing to its slow and painful death. Nuclear waste, toxic fumes and deforestation are only a few of the man-made elements of our world that only help to further the destruction of our beautiful planet.

But that doesn’t mean that the world is left completely without hope. There are whole factions of people out there fighting to keep our planet alive and thriving. Some people protect our planet’s beautiful animals, assuring that their natural landscape remains intact; others plant trees, making sure our that mother Earth is not without greenery; and there are some people who do all of the above!

For decades, the human race has stood by and watched as our planet slowly dies. A sickness brought on by our own actions.

Because of us, the world has been damaged.

A major contributor to the destruction of our planet is deforestation.

It's movement that has led to the destruction of many habitats.

Leaving many animals without homes and shelter from the cruelty of the human world.

According to a study by the United Nations’ Food and Agriculture Organization, one-hundred and twenty-nine million hectares of forest have been lost from the Earth since 1990.

An area the size of Panama is being lost each and every year.

So what can be done?

The prospect of trying to change the world and the way that the human race lives can be daunting.

But there are people fighting against it!

To make sure that our planet continues to thrive for future generations.

And it just goes to show what a little compassion can do.

Who continue to help the earth to this day.

Originally from Brazil, Sebastio was once primarily known for his photography.

But now he and Lelia are turning deforestation on its head.

By being the first people to work on what can only be called reforestation.

This passion was born out of tragedy.

Having been a celebrated and award-winning photographer for most of his life, Sebastio was left both physically and emotionally drained after having to document the destruction of the Rwandan genocide.

So he returned home.

Only to discover that his native area of Brazil, which had once been a rich tropical land, was now barren and devoid of any animal life.

But he had a strong woman by his side.

His wife, Lelia, believed that they could return to the land to its former glory.

Salgado spoke out about the reforestation process.

When speaking to The Guardian back in 2015, Salgado has this to say: "The land was as sick as I was – everything was destroyed. Only about 0.5% of the land was covered in trees. Then my wife had a fabulous idea to replant this forest."

And it had amazing results.

Because the more they worked, the more the landscape began to change and thrive. Even the animals returned. "And when we began to do that, then all the insects and birds and fish returned and, thanks to this increase of the trees I, too, was reborn – this was the most important moment."

Together with his wife, Sebastio founded Instituto Terra.

Coming together, Salgado and his wife formed the organization Instituto Terra, which has since planted four million saplings and has brought the forest back from the dead.

And they understand the importance of trees.

"There is a single being which can transform CO2 to oxygen, which is the tree. We need to replant the forest. You need forest with native trees, and you need to gather the seeds in the same region you plant them or the serpents and the termites won’t come. And if you plant forests that don’t belong, the animals don’t come there and the forest is silent."

Since beginning the project, the land has continued to grow.

For the subsequent twenty years, the land has only thrived, with more and more animals returning to the once-barren area.

Now the deathly silence is gone.

And it's been replaced by the melodic sound of birdsong, and the buzzing of insects.

And the returning numbers are staggering!

All in all, one-hundred and seventy-two species of bird have returned to the area.

But that’s not all.

They've pretty much built an entire eco-system from scratch!

Which, in of itself, is an amazing feat.

And it's done so much more.

The work that Sebastio and Lelia have done for the Earth is beyond amazing, and they've also helped to inspire others.

Their work has become a great example of ecological work.

Ecological work that has been effective and positive in its mission.

They've shown us what we, as humans, can do.

Especially when we have the drive and determination to do it.

But there’s still so much to do.

"We need to listen to the words of the people on the land," Salgado explained. "Nature is the earth and it is other beings and if we don’t have some kind of spiritual return to our planet, I fear that we will be compromised."

And this what people have had to say:

This shows us just how many people appreciate Sebastio and Lelia’s hard work.

They are providing hope for a new generation.

A generation who want a green and vibrant planet.

Maybe this is the key to a better future?

We certainly hope so!

We should all thank the Salgados for their work.

Thank you Sebastio and Lelia, you are what the world needs right now.