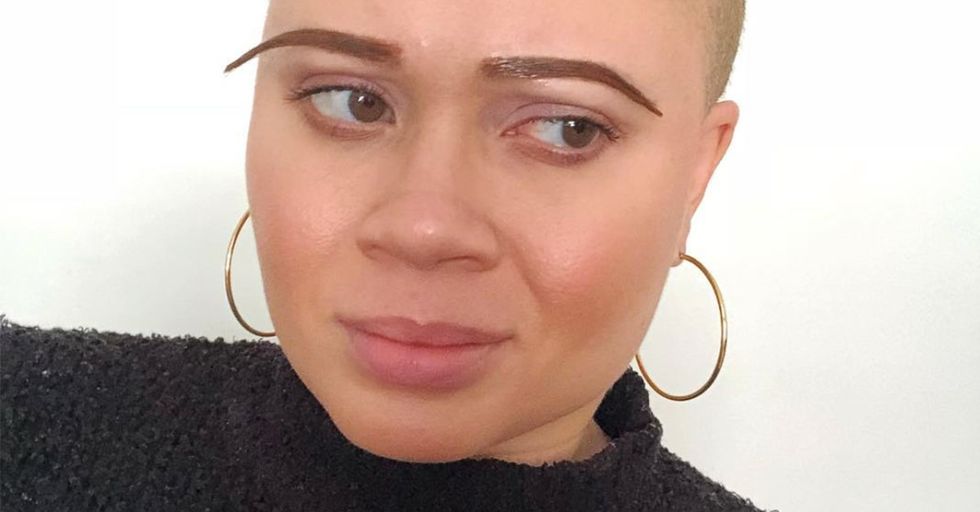 39 Photos of Beauty Mistakes That Will Make All Women Cringe

If you enjoy wearing makeup, you know how frustrating it can be when you accidentally ruin the look you were going for.

At times, it's downright tragic.

In fact, the only thing that might make you feel better is knowing you're not alone.

Every makeup lover and beauty-product-obsessed person has been there at one point or another. And for some reason, some of those people upload photos of their mistakes and fails to the Internet. At least it gives us something to laugh at, right?

Like this poor person, who accidentally cried after a spray tan:

I'm guessing they weren't going for the streaky look, but who knows? There have been weirder beauty trends out there in the past.

I'm not totally sure what's even going on here:

But it looks very uncomfortable. Personally? Not a huge fan.

They were just trying to keep their hair clean and safe from the spray tan! It didn't go very well, as you can see.

You know that charcoal stuff people brush their teeth with?

Yeah, this is what it looks like when you accidentally drop a container of it in the sink. At least your sink will be nice and shiny, though! This next makeup trend is going straight to the dogs...

Who could have eaten the lipstick?

I haven't the faintest idea of who might be responsible for this mess. But that dog looks hella fly.

You had better hope you don't have to sneeze. Sneezes are the enemy of makeup lovers everywhere.

You know what? They tried. I'm gonna give them credit for putting in the effort on this look. That being said, I don't think I'll be attempting it any time soon.

An attempt at recreating a look:

Hey, all the colors are there. That's half the battle...right? This next person may have failed to achieve the desired look, but they ended up with something even better...

On the bright side, at least you've got a conveniently located snack! Maybe next time you could try adding a cherry on top.

This video is just too real:

If you ever meet someone who tells you they applied their eyeliner perfectly on the first try, they're either lying through their teeth or they're a makeup god whom you should trust with your life.

This one falls a little flat.

Looks like they had a bit of treble recreating this look. (I'll see myself out.)

Did you know eyebrow wigs are a thing?

Well, they are. Although from the looks of this picture, perhaps they shouldn't be.

Here's an attempt at a Halloween look:

Once again, I admire the effort! But...this isn't even close. However, I'm assuming this person probably isn't a makeup professional. This next person doesn't have that excuse...

The makeup artist clearly looked at the inspiration image. That's gotta count for something, right?

There's no way you can look at this and not cringe. Those poor eyelashes!

Sure, it doesn't look exactly like the picture on the left. But it is 100 percent better than any manicure I've ever given myself!

I don't think that's your color.

I don't fully understand how this happened, but I feel bad for everyone involved, anyway. Especially that poor boot.

At least he tried.

Bless his heart. This next one is not for the faint of heart...

Let us all share a moment of silence for this tragic, tragic loss. Our thoughts are with you.

Alas, it happened again! This time, let's say a little prayer for this person's bank account, as it will undoubtedly be going through some tough times due to Sephora expenses.

This is what happens when you let a toddler play with your makeup:

It's hard to get mad at a kid when they're just being a kid. But...not too hard.

This is just too real. I've legit considered adopting the Phantom of the Opera mask as my everyday look.

You can't blame her for wanting to taste something that smells like chocolate. I had a similar experience with cocoa powder. This next one is absolutely brutal...

Well, folks. It seems we have a real epidemic on our hands. Or maybe just too much slippery lotion.

I admire the effort!

This poor woman forgot her brow powder and decided to use liquid eyeliner on her brows instead. And you know what? She's almost pulling it off! Props to her for her ingenuity.

Not exactly what you were going for, huh?

At least you tried. That's something, right?

Maybe we should all just decide as a society to forego the smokey eye look and go straight to panda. People like pandas, right?

Obviously, Tyra is a lovely woman. Even she is not exempt from this horrible phenomenon. Hopefully, that'll make you feel better about it when it happens to you.

Nah, it's cool. I actually wanted to dye my sink blue, so it all worked out.

Tutorials make it look so easy.

I can follow makeup tutorials all the way up until they start actually applying the stuff to their skin. After that point, I'm lost.

Better luck next time. This next one is a fail from a galaxy far, far away...

Next time you mess up your makeup, just tell everyone you're cosplaying as a Star Wars character. Problem solved.

OK, this one is just hilarious.

Is this art? I'm pretty sure this is art.

I've been doing some experiments and concluded that sneezes are roughly 96 percent more likely to happen right as you are finishing your makeup for the day. Scientists still aren't quite sure why.

So much for that idea.

At least you can give yourself points for actually trying to wash your makeup off. There have been plenty of times when I've left it on overnight and regretted it in the morning.