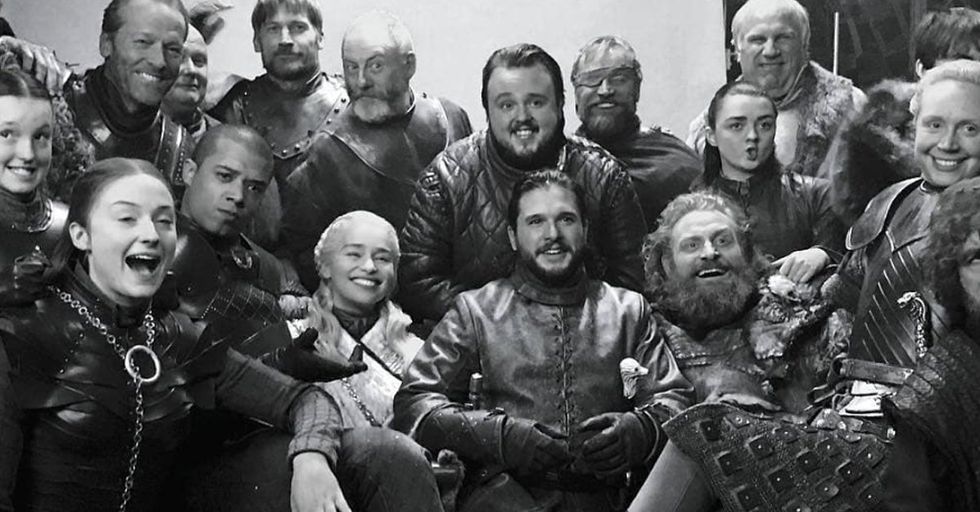 Photos of the 'Game of Thrones' Cast You've Never Seen Before

Every Sunday night (for the next few weeks at least) we'll be tuning in to HBO's massively popular saga, Game of Thrones, a show that combines Dungeons and Dragons and boobies so effectively you'd think they were designing a show specifically for 14-year-old me.

After seven seasons and some change, we're used to seeing our favorite GoT characters do their respective things — Jon Snow will take up his sword against threats to the realm. Sansa Stark will manipulate her intellectual lessers to her own ends. Hodor would have said the word "Hodor" if he was still alive. I honestly may never recover from that one.

But it's easy to forget that these wonderfully-drawn characters are played by flesh-and-blood actors. That means seeing photographic evidence of those actors behaving in ways their characters wouldn't, or even just existing in our modern world instead of the Medieval Times-inspired GoT universe, can be a little jarring.

And so, prepared to be jarred. We tracked down images of the Game of Thrones cast that show them in ways you've never seen before. These pictures are going to make you wonder why we have to be subjected to actors doing anything other than acting like characters from the show we like.

So weird. You'd never see the real Daenerys Targaryen go out with her girls and get a tattoo. In fact, I think the closest thing they have to tattoos in the Game of Thrones universe are scars from getting stabbed in the stomach by a Faceless Man.

Here we see vile queen Cersei as an adorable puppet.

Aww, she's so cute when she's made of felt! I bet I would have been way less upset if this adorable puppet Cersei had destroyed the Great Sept of Baelor with Wildfire!

Here's Jon Snow himself, Kit Harrington, looking... not all sad and ponderous?

Wow, it turns out the guy is actually quick with a cute little smile when he's not worried about the fate of the Seven Kingdoms as the Dead march on.

Cersei and Jaime are laughing and I hate it.

Listen, Lena Headley and Nikolaj Coster-Waldau, your respective characters Cersei and Jaime Lannister have the longest-standing romantic relationship on the show, but even when you were happy together, neither of you smiled. This is disconcerting.

You know how long it takes to get anywhere on Game of Thrones — I believe Tyrion and Jorah spent the entirety of Season Six on a boat going from King's Landing to Essos. If I saw him on the subway, I'd go ahead and resign myself to the fact that I was not going to get to work on time.

"What's up guys, we're The Westerosi and we're gonna do some short-form improv for ya! We just need one word to get started!" "Hodor!" "I heard 'Hodor!' Thanks so much!"

I'm sorry, are Cersei and the Shame Lady real-life friends?

Man, I remember being in high school, having no self-esteem, and wanting to be friends with the popular kids so bad I'd let them make fun of me constantly. What I'm saying is, if Cersei and the lady who followed her down the street yelling "SHAME!" for miles are really tight, well, I'd understand.

Now, this could be actor Kit Harrington in a Daenerys Targaryen wig... or it could be what Jon and Daenerys' child will look like in a Game of Thrones flashforward scene from the series finale.

Everyone hangs out with Ramsay?

Ick. Ick ick ick ick ick. Ramsay Bolton was the show's most horrible villain — he castrated Theon and flayed countless Winterfell stalwarts. Can we go ahead and not be reminded that he has friends in real life? I want to hold on to my hate.

Is that Bran being normal?

Man, I've gotten so used to seeing Bran stare creepily into the eyes of friends and enemies alike, it's disconcerting to see the man portraying our favorite Three-Eyed Raven, Isaac Hempstead Wright, smiling and joking around.

Here's a bunch of the cast with their ugly little Funko Pop figures.

I hate Funko Pops. They're everywhere, which means people must be buying them, but why?! Their eyes are jet-black, like they're some sort of newspaper comic strip character come to life, and their heads are so big! I'd even go so far as to say they're too big! Just make the head normal proportions! Am I crazy here?! My therapist says I've been screaming about Funko Pops a lot lately, oftentimes to strangers who do not deserve it, but I think it is very very weird that they're so popular!

And then there's Dany looking all Joan Jett punk rock.

This picture of course comes from a time when Emilia Clarke was touring with The Indigo Girls. Oops, wait, no, I got that wrong. I was thinking of Emily Saliers, who was in fact a member of The Indigo Girls.

Joffrey is being all cute in a tiara.

Listen dude, when you cut off Ned Starks head and shoot a prostitute with a crossbow, you forfeit your right to wear a beautiful tiara and get thousands and thousands of Instagram likes.

Sam's over here bein' all weird with Sansa and Margery.

Sure, it's disconcerting to see Game of Thrones actors out of character, but this? This picture would be uncomfortable to look at if you'd never watched a single episode. I wish Sam Tarly here could realize that girls are just people — he doesn't have to be all weird around them.

The Mountain is bigger than you thought.

In the same way I hope to one day eat a Carolina Reaper — the hottest chili pepper known to man, clocking in at 2,200,000 Scoville Heat Units — not because I want to, but just to see if I can, I hope to one day have sex with The Mountain.

Hodor is also a DJ.

Maybe this picture isn't so surprising — if you could only say one word, over and over again, DJing would be a great way to express yourself. Hold the door? More like hold the beat! (I have never been to a rave; is "hold the beat" the kind of thing someone would say at a rave?)

Lord Tywin hangs out on the beach?

I used to think dying by crossbow while sitting on the toilet would be the most embarassing thing a person could suffer, but then I saw this picture and I was like, "nah, it'd be way worse to have a beard that was the exact same color as my face so they blended together."

Joffrey had the audacity to snap a picture with Ned Stark's GD head.

Look at all these lil' baby matriarchs!

Look at them all! Cersei, Melissandre, and Catelyn all came from somewhere, and apparently, that somewhere was a bunch of movies that came out before they invented color correction.

It just breaks my heart to see these two together, not only on the Game of Thrones set but later in real life. Think about what could have been if Sam had been around to cure Shireen's greyscale and also if Shireen didn't have a father who was literally the worst man in the history of Westeros.

This is Natalie Dormer in crocs. Yes, crocs.

If she had found it in Season Two, this picture would have put Cersei at ease. No younger queen is going to usurp your position in those shoes, honey.

Sansa was Morticia Adams for Halloween with her fiancé Joe Jonas.

Hold on a minute, I just realized they don't celebrate Halloween in Westeros. Or Christmas. Or any holidays at all! Honestly, an Easter episode focused on Jon and Dany looking for eggs down in the crypts of Winterfell would be a lot of fun.

A thumbs up from The Hound.

Hi, The Hound! You're actually supposed to be a miserable guy at all times, so if you could go ahead and stop giving me a thumbs up like you're Roger Ebert and I'm a Federico Fellini movie, that'd be great.

I know you're used to seeing Robb Stark with a direwolf head sewed onto his shoulders, so it must be strange to see this picture of him with a regular human head.

Jon Snow to the Arizona Cardinals?

In this picture, it looks as though Jon Snow is being drafted to the Arizona Cardinals. And that's super weird, as we all know that, on the show, Jon Snow was drafted to the Baltimore Ravens.

From the beginning of the series, we've seen Jon Snow with a job — a man of the Night's Watch, Lord's Commander, King in the North, the Queen's Consort. That's why it doesn't feel right to see him sitting alone in his underpants trying to figure out how UI benefits are going to last.

Jason Momoa as a little girl.

Remember when Khal Drogo was riding through the desert with a giant wound on his chest that was festering under the hot sun? I would much rather look at that than this photo.

Tormund in a suit?

The most rugged and feral of all the Wildlings, Tormund Giantsbane is truly a man of the wilderness. That's why it doesn't quite fit to see him in a suit. Where'd this guy get his sense of style from, spending three months sucking at the teat of a tailor?

Iain Glen's made Jorah Mormont — a former human slave trader, mind you — into a sympathetic and beloved character. That's no small feat, but it isn't as hard as winning over the family of his new girlfriend, who is also our aunt. But you know what? Good for you, Aunt Carol. You deserve a good man in your life after that last dude.

This White Walker was on Cheers?

In a blink-and-you'll-miss-it cameo, a White Walker appeared in a Season Four episode of Cheers, playing a patron who wanted to turn Norm into an undead warrior who would battle the living and bring forth an endless night. Good episode.