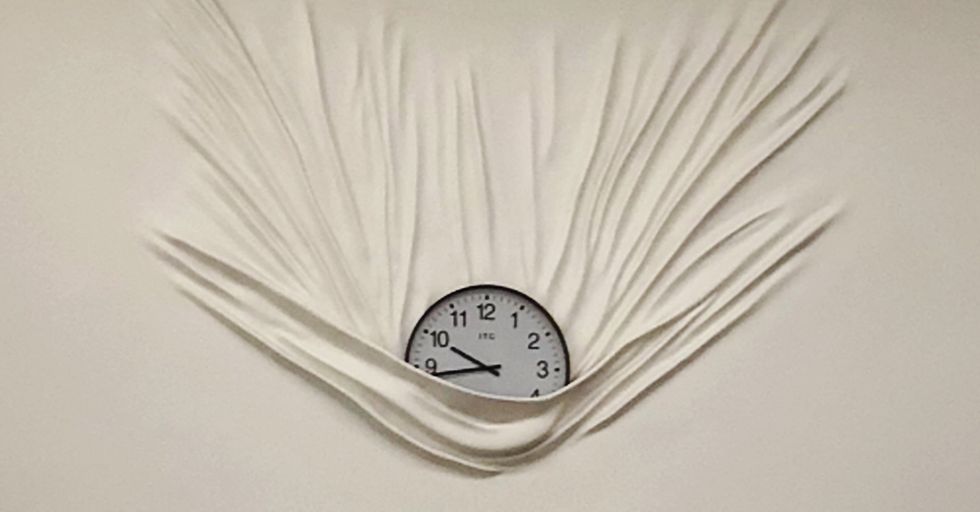 As you go through life, you come to expect things to always look a certain way.

Suddenly, something happens and an object you've seen thousands of times looking one way looks completely different. It's kind of mind-blowing. Here's what I mean by that...

If you've ever seen a pregnant dog, it's most likely only been from the outside.

But here's an X-ray. Intellectually, I understand there are supposed to be more bones involved when a dog is pregnant, but this feels like way too many bones. You know what I mean?

And here are the Teletubbies like you've never seen them before:

Thanks a lot, Internet. And I thought the Teletubbies were horrifying enough with their heads on.

How are you going to know whether you're supposed to "rinse and repeat" or "enires dan trpeae"?

This is what's inside a Magic 8 Ball:

It's basically a giant die that floats in that "mysterious" blue liquid. And as for that blue liquid...

It's only in a cylinder *inside* the Magic 8 Ball!

Admit it: You thought the entire ball was filled with the stuff. Nope!

The recipe called for one clove of garlic...

...But something tells me this isn't what they meant by that. (I'd still use it, though. Garlic is delicious!)

Why not both? (Apparently, this is what can happen when you leave cold medicine in your car on a hot day.)

It's probably just as thrown off as we are by the weird "soil" it's found itself in. Is anyone else reminded of the Snake game on your old Nokia phone?

"I'll just crack one egg into the pan."

What?! The eggshell came off, but the membrane remained unbroken! Interestingly enough, that's not even the strangest picture of an egg I came across...

It's probably perfectly edible. That being said, I don't think you could pay me enough money to eat that egg.

Time flies when you're having fun.

But when you're at work, time kind of just sags. And takes the wall with it, apparently.

Look at this picture-perfect snowflake!

Most of the time you only see it in piles and piles of miserable stuff that you have to shovel. Like this, it's almost desirable. (I'm not trying to jinx the weather, though!)

"Hey, if you wanna stop here, that'd be great. No pressure, though. It's just a suggestion."

This is one of two things.

It's either a boardwalk that's been damaged by a hurricane or a portal into the Upside-Down. Actually, maybe it's both. And now for the scariest animal you've ever seen...

I don't know if Jaguar is interested in changing up their look, but this is pretty darn intimidating if you ask me. The only thing scarier than a jaguar is a jaguar covered in jagged ice.

I should say so. The mailbox didn't stand a chance against the Sun.

Look! It's some kind of torture device!

Just kidding. It's the mold they use to make statues of Ronald McDonald. Also, in related news, I am never sitting on one of those McDonald's benches ever again.

This bush seems to be very angry about something.

Is it just me, or is this bush flipping us off? Hundreds of times?

One fry to rule them all.

There's only one thing to say to this. Pass the ketchup. Share this list with someone who would enjoy a fresh perspective on things they see every day!