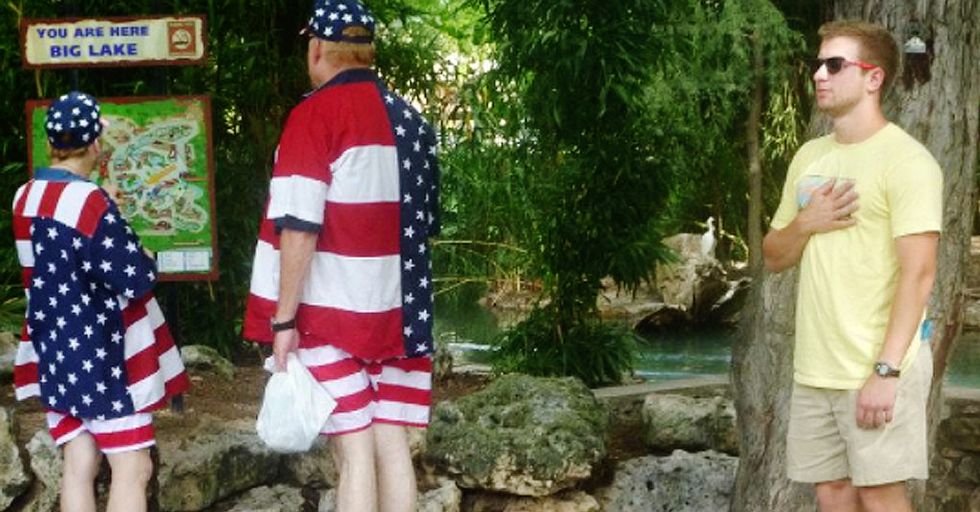 19 Photos That Prove America Is a Very Weird Place

America is a lot of things.

The land of the free.

The home of the brave.

The country where you can get 40 chicken nuggets for less than $10.

As an American, I know there are a lot of things about this country to be thankful for.

This list of weird stuff is not one of those things.

The most impractical pair of sunglasses in all the land!

It doesn't get more American than hamburgers.

That is, of course, unless you literally shape your hamburgers like the United States.

And I don't want to know.

Nothing says, "'Murica!" like a tank made out of cheap beer.

But the next one is truly appalling...

I swear to God if this candle doesn't smell exactly like the cover of that Bruce Springsteen album, I will throw a fit.

What are we ever doing here, people?

Do nut put a sloppy joe on a donut.

My gag reflex is really reminding me of its existence today.

Where all you have to do to get a free meal is hide a lethal weapon on your body.

Some people... They just take the flag stuff too far.

But the next one may be even more American...

Oh, brother. If people are without their guns for one second it's like they've forgotten who they are.

Well, this is quite the display.

Everything deep-fried, bursting with cheese, and "loaded." That's what 'Murica's all about.

I don't even want to think about how much sugar is in that gallon of sweet tea.

I'd say this about sums up our problem.

The next one is truly nasty, though...

I'm just being reminded of this one time I saw an eating contest that was just people shoveling bowls of mayo into their faces and now I have to go throw up.

This has got to be a joke, right?

There are no words for how awful and toxic and weird and terrible this is.

This one combines all of America's favorite things.

A monster truck selling me chocolate-covered bacon on a stick is a pretty good visual for what America is all about. Share this on Facebook with a foreign friend who thinks Americans are weird.