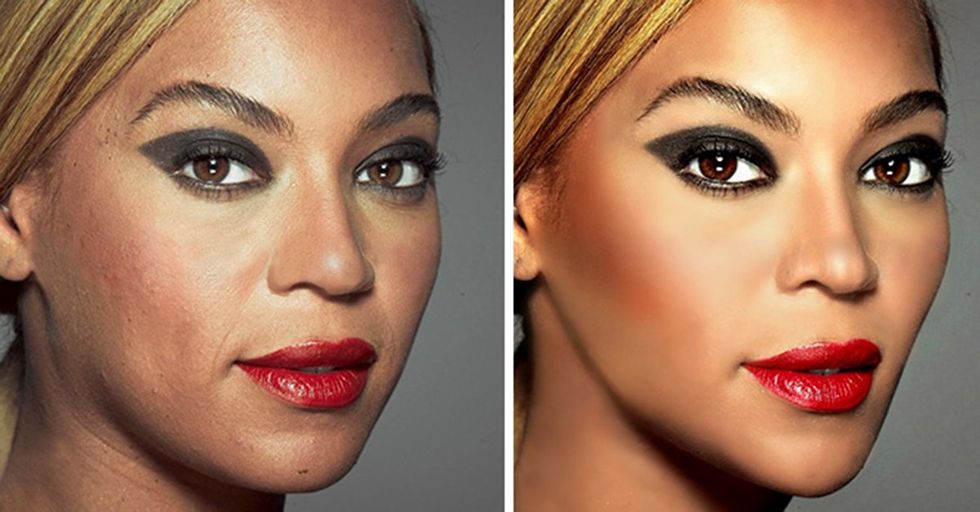 Altering photos is nothing new. In fact, it's been around pretty much as long as magazines and celebrity culture has. But now, Photoshop makes it so easy to manipulate pictures to make bodies seem both natural and more "perfect" that you almost have to assume every photo you see of a celebrity has been filtered, tinted, or changed to some degree.

Check out these comparisons to see just how big of a difference Photoshop can make on some of our favorite celebrities...

Even Queen B sometimes needs a little photoshop.

The airbrushing is unreal.

It's all about lighting, to be honest.

Britney Spears seems to be the queen of photoshop back in the day.

Just a little touch-up here and there...

If that wasn't enough, here's one more for the road...

These were taken and compared from Gaga's Versace shoot.

No woman is naturally that thin! It's unrealistic.

This is a pretty extreme case...

These were taken for Rolling Stone magazine.

Lawrence has previously spoken out against extreme photoshopping.

Even people with near to perfect faces have dabbled with airbrushing.

Her body is almost non-existent the way she's ben edited!

Cruz is beautiful even without the photoshop, as are all these people in the list.

Just that sweep over the fine lines on her face made a difference.

This was a very unnecessary change. Trainor has always been about body positivity, so there's really no need for this.

It's always for magazine covers, isn't it?

What is with wanting to photoshop women's chests? Leave them alone.

Hyperpigmentation is natural but photoshopped photos make it seem like such a bad thing...

She looked perfectly fine before the edit.

The queen of photoshopping herself can't expect others not to photoshop her.

Imagine photoshopping Rihanna's waist like that? It's no wonder women are so insecure about their bodies!

And if you thought it couldn't get worse, some publications are editing children... children.

These Victoria Secret Angels have been so edited that their bodies are unrecognizable.

Getting older doesn't mean that you need more editing to cover up fine lines and wrinkles. they should be embraced and Jen has always shown us that it is possible.

Zendaya, being the bad b**** that she is, called out people for photoshopping her to such a distressing level on her Instagram. You go, girl! If you want to see more photoshop fails, then keep scrolling...