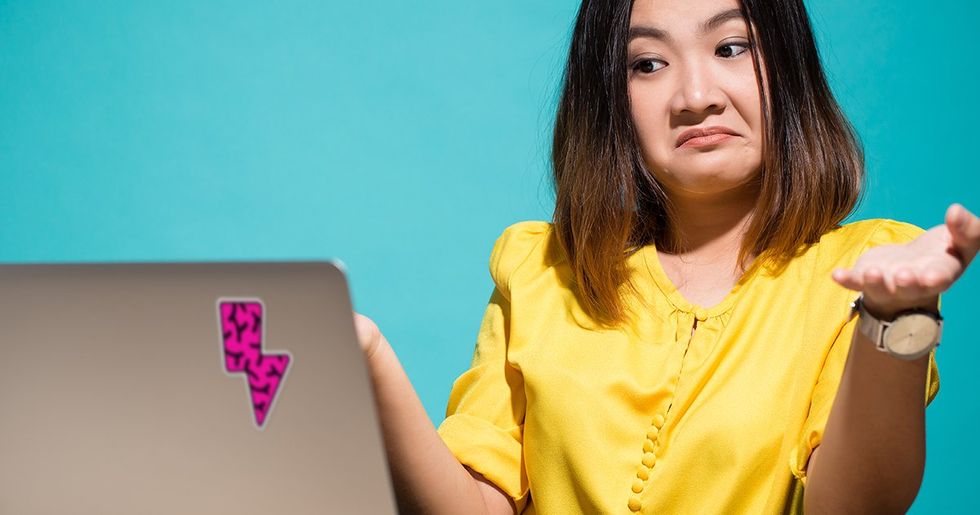 19 Photos That Will Make You Go 'Hmmmm'

Sometimes you just need to take your mind off of the sinking ship that is American democracy and world diplomacy.

And we have just the distraction for you.

The people of Reddit really know how to pick and post the weirdest of the weird, the most random of random. And we've collected some of our favorites just for you!

It's a two-headed turtle! Sometimes they want to go in different directions, but it takes them a while to figure that out because they move so slowly.

This is a shoe store that has an area with all different types of ground you might encounter so you can test your shoes!

This is not actually the main character in Despicable Me. this is just a smudge on an elevator.

This is the ultimate for any kid who did this with their calculator in high school. It says BOOBS! The next one is pretty and silly all at the same time.

This is a gorgeous moth, but the markings on its back totally look like a cute little snowman! Do you see it?

It was so hot in Puerto Rico that this ceiling fan actually melted, meaning it couldn't even do its one job!

This is incredible. The guy on the right made pants out of all the hats he got from this festival. I sincerely hope he wears them out everywhere, not just at this festival.

It's three bananas in one! Step right up! Only twenty dollars to see the triple banana before I eat it and it's gone forever!

This poor spider was painted onto the wall, where it will be caught for eternity. The next one is pretty impressive.

The picture of the bicycle in this logo actually spells out the word "cycle." That's some top-notch graphic design right there.

That little ghost image right there is the remnants of a poor bird that flew (really hard) right into the glass.

This right here is an emergency toilet located in an elevator. While I appreciate the effort, I don't know that I would want to risk the door opening with me on it.

This bathroom has lights on each stall that let you know if it's in use! How brilliant! Now you don't have to crane your neck looking under stall doors like a creeper.

This library loans out paintings like books! Perfect if you have some in-laws coming over that you want to impress. The next one really is clever.

How awesome is this? I guess the lakes really live up to their name.

Apparently, this is the first and last beer from the same keg! Who knew the color changed so drastically?

This scar looks exactly like the Nike logo. Sure, "just do it," but you might get hurt.

Have you ever seen a water bottle like this with a flip top? It's kind of brilliant. It looks like it saves plastic, and you won't lose the cap.

Party City? More like Party County, am I right? Share this with someone who would find it interesting.