29 Photos That Will Horrify Any Somewhat Decent Person | 22 Words 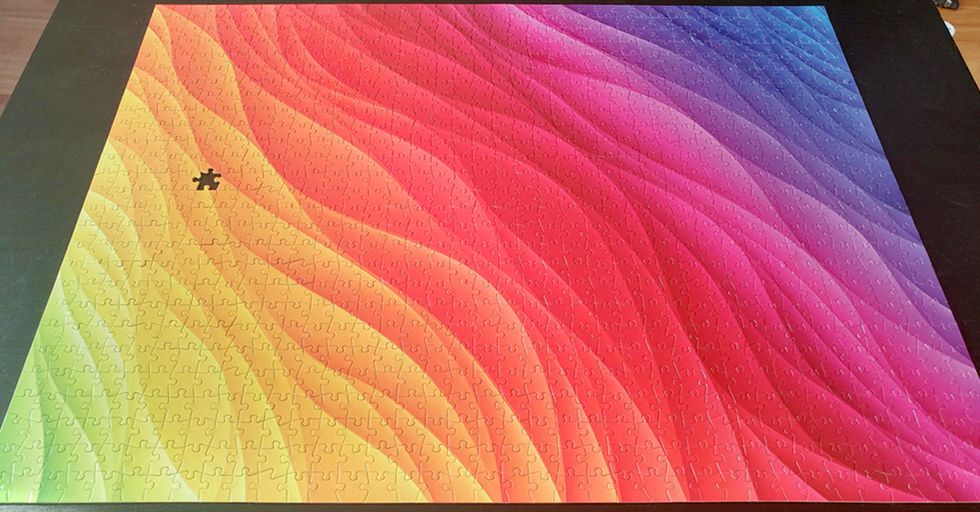 29 Photos That Will Horrify Any Somewhat Decent Person

You're a good person, right?

Like, you try to be nice to other people. You floss every once in a while. Maybe you even recycle.

We could use more people like you in the world.

Unfortunately, I'm afraid this pictures might disturb you a bit.

They'd disturb anyone who was even halfway decent. Sorry in advance.

You followed the directions. That's bad.

Thankfully, as an English Lit major, I didn't have to take any online math tests in college. If I had and this had happened to me, I probably would have dropped out.

When you think about it, why does anyone arrange windows in straight lines? Maybe because they don't want to drive the good people of the world crazy?!

What do you see here?

Just a pile of dishes in the sink? WRONG. The sink has fallen. I repeat: The SINK has fallen!

This is just the worst.

I would have just left the bulb out of that particular shade. Or knocked the entire thing down. Both are fine options. This next picture might make your eye twitch.

I can't imagine why anyone would ever do this. Unless they were actively trying to make someone cry.

But, it has wheels.

Look, Debra, we didn't go to the trouble of inventing tiny wheels for your suitcase so that you could drag your luggage on the ground like some kind of Neanderthal. Come on.

If you wear glasses, you'll understand this one.

This happens to me every. Single. Time. I take my glasses off. Always on the right side. It's the pits.

Oh, you have to charge your mouse? Hope you weren't planning on using it at the same time! This next picture is also an Apple-related fail.

Thank goodness they took away all of the useful ports on my laptop. I was beginning to think it was too good.

For the budding artist.

This has three levels of awful in one convenient package: First of all, it's not a Crayola brand, so get out of here with that. Secondly, the cardboard takes up that giant space in the middle. Third (and worst in my opinion), it says there are 150 pieces, but there are only 75 markers. They're counting the lids as pieces. Come ON.

Three people. 12 seats. Like I said, I didn't take much math in college, but I'm pretty sure this is messed up.

Oh, you wanted an *entire* slice of cheese on your cheeseburger? Who do you think you are? The Queen?

Not only is this annoying from an aesthetic standpoint, but it also results in your arm hairs getting pulled on for as long as you're wearing the wristband. 0/10, would not recommend. This next picture takes failure to the next level.

Whose idea was this?

If only there were a way to label rooms in such a way that it was obvious what floor they were located on. Never mind. This way is clearly much better.

What was the plan here?

I can't look at this picture without making my eye start to twitch. Why are they in this arrangement? Why are you using those light bulbs? Why is any of this happening?

If a mug handle doesn't fit at least three of my fingers, I immediately throw that mug right to the floor. That's better than it deserves, honestly.

Your soap must be this tall.

This could have been fixed so easily. But some people just want to watch the world burn, I guess.

It's not illegal to stand on a public beach to watch a wedding ceremony being held there. But it should be illegal to stand RIGHT IN THE EFFING MIDDLE OF IT. This next picture is not for the faint of heart!

If your house is filled with things open like this, you should probably start running. There's something inhuman living there.

But you were so close!

If you don't put your shopping cart in the corral when you're done unloading your stuff, you deserve to step on a LEGO. There's no excuse for that.

This happens to me at least once a week.

And every single time, I feel betrayed. How could you do this to me, Internet?!

Nope! Sorry, your dad is going to have to change his middle name for you to proceed. I recommend Paull.

Take back the diplomas.

That's not how it works. That's never been how it works. Oh boy. Oh no. This is bad. So is this next picture (but it's mostly just kinda funny).

This guy is having a lengthy phone conversation.

With his phone's flashlight on. Nothing like trying to enjoy some TGI Fridays with a flashlight randomly blaring right in your eyes.

Who does this? No, seriously. Please tell me who would do a thing like this. I need to have a serious talk with them.

If you can see your hand through a sheet of the toilet paper you've been using, that's a sign that you've messed up somewhere in your life. Good luck.

These pencils are the worst.

Not only is the label annoying AF, the pencils themselves are super plasticy and don't erase well. -5/10.

Oh, you were enjoying doing a puzzle? Let me just fix that for ya. –The Universe. Share this with another decent person. We have to ban together.