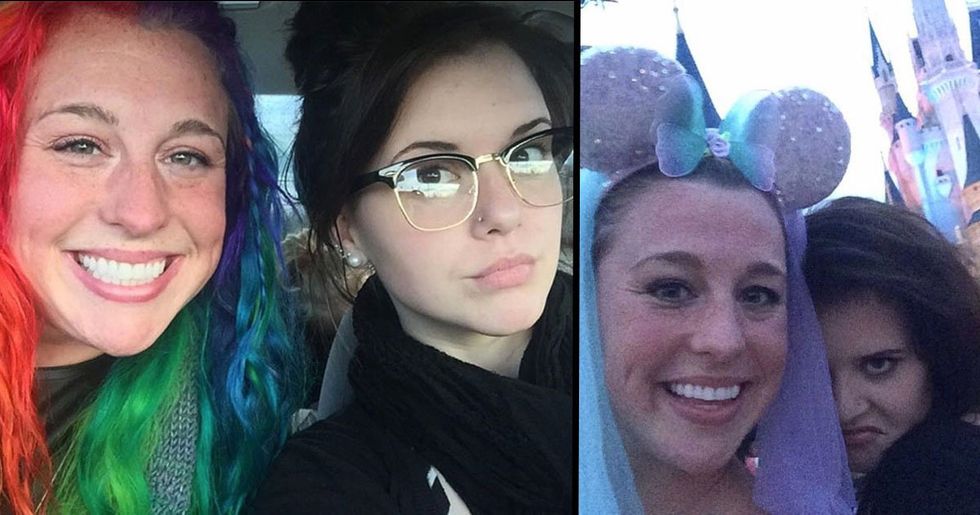 Just because 2 people are siblings, it doesn't mean they'll be alike - even identical twins can be polar opposites. It doesn't matter if you've been brought up in the exact same environment with the same parents, it seems like a vast number of siblings can still turn out completely dissimilar.

But one sister duo has taken this to the extreme - aka they literally do not resemble each other in the slightest. So much so that a Twitter thread comparing the sisters' very different houses has gone viral.

Of course, people have been quick to make hilarious comparisons and memes about the pair as well.

You honestly won't believe how different these two sisters are...

Scientists have long established that personality is a result of the environment rather than genetics.

But don't siblings grow up in the same environment?

Well, yes, but even though most kids grow up in the same home, their experiences can still be worlds apart. Some of these things can be subtle, like not being at the same age during a family event like a divorce or a big move. Or, it could also be down to parents treating their kids differently. We know we've all had a moan about a touch of sibling favoritism before.

There's also research suggesting that siblings will actively try to be different from each other.

The reasons for this can range from trying to establish a unique identity (especially in twins) to trying to get the attention of their parents.

And differences often grow over time.

According to behavioral geneticist,  Gerd Kempermann, an experiment with mice showed that even genetically identical animals behave differently and that these differences grow with time. Okay, so we aren't mice, but you get the picture.

But there's one sibling duo who really are worlds apart.

2 sisters from Detroit have gone viral after posting images of their polar opposite styles and houses on social media.

Alexandria Bishop, one half of the sister duo, was the one who posted the snaps.

Alexandria is a makeup artist, sculptor, and illustrator, while her sister, Jessica Toutant, is also creative, owning her own henna business.

As you can see, their personal styles are a little different.

The sisters are often referred to as "Malibu Barbie" and "Wednesday Addams," and we can certainly see why. You can't get much more different than that.

And when Alexandria posted images of her and her sister's houses, they instantly went viral.

Get ready, because the contrast is hilarious...

This is Alexandria's front door.

As you can see, it's very inviting, complete with a coffin and an extremely welcoming doormat.

In quite the shift of aesthetic, here's Jessica's:

Decked out with dozens of posters and drawings, as well as geeky memorabilia, topped off with skulls (unsurprisingly), and completed by the cute little pup. Her taste in decor is certainly true to her "Wednesday Adams" label.

People loved Alexandria's home so much that she received requests for more snaps.

And she delivered, proudly posting a series of pics from around her beloved home. We love those plants. And that shower curtain? Very cool.

Colorful walls and cozy comforts... did we expect anything less from the woman with a rainbow fence in her back garden?

Alexandria has posted even more visual proof of her and her sister's style differences.

Like this picture, wherein it quite literally looks like a rainbow fairy took Wednesday Adams out for the day.

Or this one, where Alexandria looks less than amused.

Alexandria doesn't look quite as happy to be at Disney as her sister does.

Alexandria says that their drastic style differences are due to their age gap.

Speaking to Buzzfeed, she explained: "Jessica and I have a pretty big age gap, so we naturally have been interested in different things. Our style only became drastically different when we became adults and started dressing how we truly wanted."

But, despite being polar opposites, they both get along really well.

It seems that they've been able to find common ground. "We both love the same movies and shows, aside from my love of horror, and we get along well in general aside from playfully making fun of each other often. Our styles are just completely different," Alexandria told Metro.

As you can imagine, after Alexandria posted the snaps, Twitter lapped it up.

At the time of writing, the post has nearly six-hundred-thousand likes and over eighty-thousand retweets. Naturally, it also received many responses, full of hilarious comparisons, memes, and people sharing their own experiences with their not-so-similar siblings.

Take a look at the reactions...

This one is particularly accurate.

How amazing would it be if they lived next to each other?

In fact, after seeing the tweet, Alexandria had the best response.

Okay, they had better make this happen.

Others shared their own experiences with their polar opposite siblings.

Several Twitter users were keen to show off their drastically different brothers and sisters.

These sisters are basically carbon copies of Alexandria and Jessica.

If anything, the Twitter thread has shown us that having "opposite" siblings is actually quite common.

Alexandria was clearly living for all the responses from siblings embracing their differences, writing "both beautiful" after seeing this snap.

Despite their differences, Alexandria and Jessica remain close.

They may have found Twitter fame for having radically different styles, but the two sisters say that, clothes and decor aside, they are actually both quite similar - with the pair each having a creative flare. Basically, they get along really well.