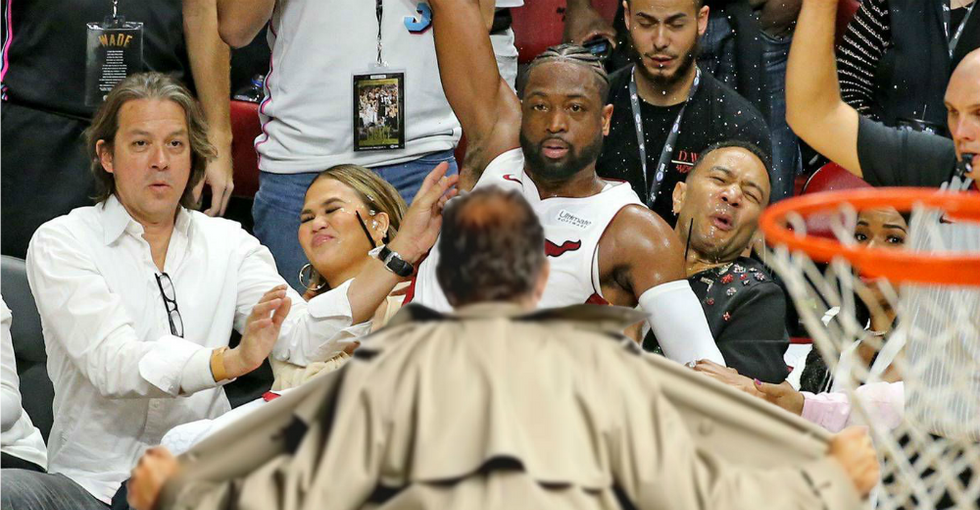 Photoshop Battles That Will Make You Howl With Laughter

Photoshop can be a magical thing if it's done correctly. Sure, sometimes it's used for evil instead of good, like when celebrities use it to turn themselves into mythical creatures with the type of perfectly formed bodies that no mere human could ever hope to achieve. (I'm looking at you, Kardashian sisters.) But when it's used for good, it can create images so hilarious, touching, bizarre and adorable that they can turn your whole day around in an instant. The following images are examples of the good type of photoshop, and if you've been having an especially horrendous day, prepare for it to make a quick 360.

Keep scrolling to discover the winners of the most delightful photoshop battles of all time. Seriously, some of these are so impressive that they'll make you do a double take. Number 30 is a little too realistic. Maybe that leopard actually did find a Rubik's cube...

The hills are alive...

If you've never been there yourself, you've probably heard about the breathtaking beauty of the Pink Valley in Mount Fuji, Japan. If only there were something that could make it even more spectacular...

...with the sound of Godzilla's fire breath!

I don't remember this movie taking place in Japan, but I must say, Julie Andrews has never looked better.

Look how proud this working pup is of his latest score! I wonder where he found all this pot!

...who just got the gang in a major pickle.

Zoinks! He's still a good boy, even if he is a total narc.

I didn't realize until seeing this photo that a freshly mown lawn could turn a dog green. Now I feel the need to do something spectacular with this information.

...who has a serious beef with Christmas.

It's the pup who stole Christmas! Which, honestly, I have no problem with. You can steal whatever holiday you want from me, boy. How could anyone say no to that face?!

The person taking the picture probably should have said something to this poor guy. I'm guessing this all went horribly wrong a few seconds after this photo was taken.

This is a much happier scenario. They even have matching hats!

We've all seen this hilarious blooper from when Dwayne Wade crashed into Chrissy Teigen and John Legend at a basketball game. But the question nobody's asking is: What was it that made him so distracted?

...that was caused by something cheeky.

Ah, yes. The famous Miami Heat Flasher. How does this guy keep getting past security?!

The fact that this is the photo that doesn't contain any photoshopping whatsoever is a bit concerning. Is that just some rare breed of levitating cat?

Now, this makes much more sense. You can tell the other cat in the background is shook by his brother's impressive pogo stick skills. It's not hard to imagine who the favorite is in this household.

How did this clever pup know how to perfectly line his eyes up with that wrought iron fence? Can you imagine being on your way to work and walking past this darling sight?

...who's just trying to keep his eyesight in check.

Sure, it's a hilarious image, but this optometrist is about to give this poor guy the bad news that he's completely colorblind. Woof, that's ruff.

That is one good-looking duck. If this duck had a makeup tutorial on YouTube, I would totally watch it.

...transformed into a work of art.

Ah, yes. The Duck with the Pearl Earring by Johannes Quackmeer. My favorite painting.

I don't understand how this photo was achieved, but I'm certainly glad it was. The cat's fur even perfectly matches her hair color for a flawless beard match!

...that moonlights as an iconic rock duo.

I should have known that ZZ Top's beards were actually just cats in disguise this entire time! Those funky felines sure can rock!

Can you imagine a more adorable couple than Kit Harrington and Rose Leslie, aka Jon Snow and Ygritte?

...that's transformed into an even picture-perfecter couple.

Oh, look! Here's one! How could Kit have chosen Rose over his true soulmate Tormund?! You know nothing, Jon Snow.

I wish anything excited me as much as that field of daisies excites that hedgehog.

...who's living his best life.

Seriously, does this hedgehog have a self-help book I could read so I can experience this level of happiness? Maybe I should just find a waterslide...

...who are no match for a certain Italian.

Okay, now they're perfect. If I'm remembering correctly, this was always the toughest level in Super Mario Bros.

That is one bitter baby. I do, however, appreciate the irony of the sweet, innocent setting juxtaposed with the look of sheer hatred on his face.

...that's coming soon to a theater near you.

Is it weird to admit that I'd totally watch this movie? I like to imagine it as some sort of revenge plot where the baby travels across the country to track down the man who wronged him. And to a baby, this "revenge" probably just consists of creating an especially heinous diaper for them to change.

Was this haircut called the "bobblehead"? This poor dog is in danger of toppling over from being too top-heavy!

Much better. Sure, he's missing a back leg, but at least he has his dignity back.

I make this same face every day during lunch. Although it's usually while staring at the microwave while my Cup O' Noodles cooks.

...that has a knack for puzzles.

Rubik's cubes are SO frustrating, aren't they?! It's embarrassing to admit, but this guy has already gotten further along than I ever have with one of these things. Now, get ready for some of the worst Photoshop fails of all time...
15%

$99.97 $29.99
Buy Now
See More Deals
We hope you find these deals as awesome as we do! Just an FYI: we may receive a share of sales from links on this page