The Greatest Photoshop Battles of All Time | 22 Words 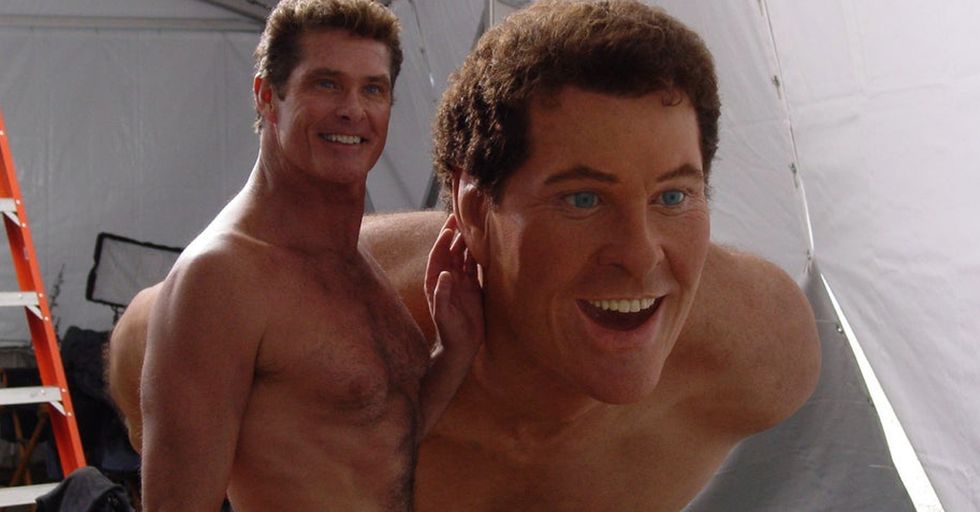 The Greatest Photoshop Battles of All Time

If you're one of the few people who understands what the terms "channel blending," "layer mask," or "rasterize" mean, you have a duty to your fellow internet users to jump into every one of the many Photoshop battles you come across.

Yes, Photoshop Battles — those magical moments when a .JPG comes around and we all agree has one element that can be put into another picture to make it all the more hilarious. We need people who can cut a person out of one picture and place them, sometimes even convincingly, into another picture, because those mashed-up pictures are the funniest pictures on the internet.

But if you're someone who doesn't even know how to crop an image, let alone cut out a goofy-looking baby and put them in the ship from Alien, here are some of the best Photoshops from Reddit's /r/photoshopbattles/ subreddit.

PHOTOSHOP BATTLE: This cat with a skull on his chest.

Uh oh, our man Emanuel Macron is really going for it, celebration-wise. It would be very easy to Photoshop him into a situation where it would be wildly inappropriate to celebrate...

THE WINNER: Vous shall not pass!

Photoshop by H0agh Whew!
Macron wasn't put in the crowd at the Roman Colosseum, but was instead popped into a climactic scene from Lord of the Rings.

PHOTOSHOP BATTLE: This hedgehog posing in a tiny kayak.

Look at this little cutie, getting just so excited for his first-ever river rafting trip.

THE WINNER: A sequel we never thought we'd get.

Photoshop by PennyHop I guess there were a lot of unanswered questions at the end of first Titanic, such as "How would Jack and Rose react to a giant baby hedgehog?"

PHOTOSHOP BATTLE: This cat looking over a Christmas scene.

THE WINNER: All hail the God-Cat.

Photoshop by mandal0re Ah yes, sometimes the simplest answer is the best answer — when presented with an image of a powerful cat, just Photoshop him to look like the most powerful cat.

THE WINNER: *glass of water vibrates*

Photoshop by artunitinc Oh, they put him in Jurassic Park! Listen, it's one thing to see a T-rex, because you at least have a little bit of context as to what it is. You see a giant whatever this thing is attack you? Your brain might melt out your ears.

Ah, a classic role-reversal. Do not be surprised if it comes out later that this officer and this dog did a Freaky Friday-style brain switch.

THE WINNER: A very happy family.

Photoshop by DrWankalot Sometimes, it's nice to see a dog-man and his man-dog take a nice leisurely drive up the coast.

PHOTOSHOP BATTLE: This cat with a pillow of itself.

I'll tell you what's so haunting about this cat — how does he know to make the same face in this picture that he made on the picture his owners had made into a pillow? Can this cat look shocked and appalled on command?

THE WINNER: Come play with us.

Photoshop by RexLeou This cat and his super-soft doppelgänger were Photoshopped into the Overlook Hotel from The Shining, as all haunting twins must one day be.

Did he get this ripped just by meditating?

THE WINNER: The World's Greatest.

Photoshop by -BluBone- The idea of seeing a monk stand over Smokin' Joe like this is deeply unsettling. The possibility that these monks are not processing their anger but instead bottling it up to one day use on an opponent is terrifying.

Listen little buddy — I was at least as uninterested as you are in science until probably 11th grade, but I'll tell you this — one day your brain will click over and you'll realize that quantum physics is the coolest thing in the world.

THE WINNER: Make him an offer he can't refuse.

Photoshop by mr_mistoffelees The little guy's sleepiness, though, was used instead to turn him into a powerful mob boss listening to requests on this, the day of his daughter's wedding.

PHOTOSHOP BATTLE: This tree that was struck by lightning.

I'm going to assume that bright red hue was caused by the lightning, but doesn't it look like the tree was cut open and has a giant, fresh wound?

Photoshop by ILL_DO_THE_FINGERING This inventive Photoshopper saw the red gash instead as a mouth, crying out in desperation at the loss of his brethren.

If there is one thing Indiana Jones hates, it's oncoming boulders.

THE WINNER: If ya smellllll...

Photoshop by MattCloudy Not sure why this Photoshop was so popular though. I don't notice any changes. It's still just Indiana Jones being chased by a Rock. Is there maybe a subtle change in the trees in the background?

PHOTOSHOP BATTLE: This dude and his jacket.

This dude looks like either an extra from an early '90s music video or a man from an alternate, infinitely fresher, universe.

Photoshop by MattCloudy Or, those colors could function as reflections of the strange colors you see in soapy blown bubbles. What's the deal with those colors? Why is that happening? Can that sleepy two-year-old scientist explain it to me?

PHOTOSHOP BATTLE: This town crier delivering the news about the Royal birth.

First of all, it's incredible that England still has town criers. But also, this man looks like the cashier at Ono Hawaiian Barbecue just told him they don't offer a senior discount.

THE WINNER: Gimme fuel, gimme fire, gimme that which I desire.

Photoshop by bearsdriving Wow, it's hard to believe how heavy this is. This Photoshop makes it look like the old town crier has all the pent-up anger you'd need for a life in heavy metal.

It has to be tough to be a celebrity in this era of paparazzi, and god bless Sophie and Joe for finding a way to make their photographs so creepy they will never be sold to a single publication.

PHOTOSHOP BATTLE: David Hasselhoff posing with his wax stunt double on the set of the SpongeBob movie.

For whatever reason, I have a bone-deep fear of giant human beings. I'm not sure that this larger-than-life-size David Hasselhoff would've scared me on its own, but next to the regular-sized David Hasselhoff? It terrifies me.

THE WINNER: There upon the rainbow.

Photoshop by xprmntng Aw, now that's the answer to a never-ending story.