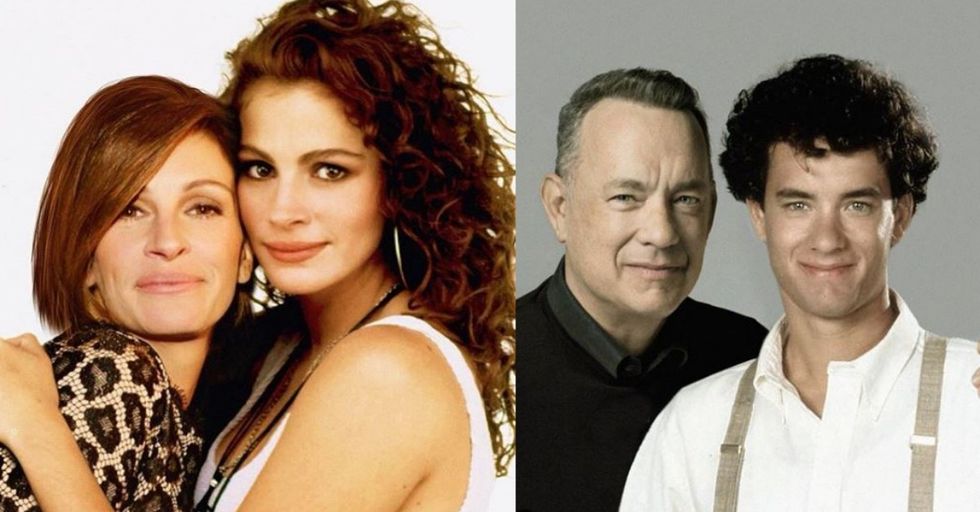 Celebrities seem like robotic beings that somehow manage to go decades without aging. Take Cher, for example. She somehow manages to slip into the same barely-there costumes at age 72 that she did when she was 20, and her wrinkle-free face seems to defy all logic. Okay, so plastic surgery has a lot to do with that, but it's still impressive to see Cher still looking very much like Cher year after year. But if you've been feeling a bit down in the dumps about your own rapidly progressing age, one artist has been using Photoshop to show just how different (or, relatively unchanged) our favorite celebrities are from their younger selves by splicing them together into one amazing photo.

Ready to have your mind blown? These 30 pics will not only make you feel incredibly old but maybe a bit better about your most recent birthday. Or, maybe a bit worse. Just try to remember how prevalent Botox is among the Hollywood elite.

Big Haley, meet little Haley. Is it me, or does grown-up Haley still have the same adorableness that he had when he was just a tyke? Minus the beard, of course.

What a pair of handsome gents! Older Gere pulls off the Silver Fox look like few can. It must be nice to somehow become better looking as you get older.

Look at these two Friends! Sure, the time has obviously passed, but LeBlanc seems to be aging very gracefully. The gang at Central Perk would be proud.

How adorable was little Amy in her ballerina outfit?! Such a talented artist. Such a profound loss to the industry.

Gaga then, meet Gaga now. I, for one, am loving Gaga's more toned-down look she's been rocking lately. Although I wouldn't mind another glimpse at the infamous Meat Dress.

Of course, Ellen would be best buds with her younger self. She's Ellen! She's everyone's best bud!

My heart exploded looking at this pic of baby Pink getting a piggyback ride from her future self. The resemblance to her 7-year-old daughter Willow is seriously mind-blowing.

Look at all those baby spices! It's pretty impressive how they've all managed to somehow become better looking more than 20 years later. Spice Girls 4 Life!

Little Barack had a glint in his eye like he knew he'd grow up to become the President of the United States. I'm sure he had presidential potential even in Kindergarten.

The man, the myth, the legend. There will never be another Bowie, and I, for one, am pretty darn grateful for the time we had with our Ziggy Stardust.

From cute Harry Potter kid to gorgeous adult. How fun has it been to watch little Hermione grow into the successful actress she is today?

The Olsen twins are all grown-up with their own successful clothing line. Does anyone else feel extremely old just looking at this photo?

Young Courteney looks straight out of the Bruce Springsteen music video that first catapulted her to fame. And today, she's still just as stunning as her 80's counterpart.

Queen Bey had star quality even when she was just a teen. And as someone who spent their younger years as a gangly and painfully awkward teen, this is a tough pill to swallow.

Past Cher, meet present Cher. This iconic singer is still dazzling fans with her show-stopping costumes and epic performances.

Is it just me, or does present-day Bieber look pretty shocked to see his younger self in this pic? Honestly, if I had to come face-to-face with the horrible hair choices of my youth, I'd probably make the same face.

From cute '90s kid to handsome Oscar winner. Confession time: I had a massive poster of a young frosted-tipped Leo hanging in my room until I reached high school. I might even still have it somewhere...

Remember when Clooney got his start as George Burnett on The Facts of Life? Now he's married to barrister Amal Clooney and has won two Oscars.

Since his 21 Jump Street days, Johnny has been nominated for three Oscars, starred in countless blockbusters, and acquired an impressible amount of tattoos and accessories.

Grown-up Drew is just as adorable as she was when she starred as Gertie in a little movie called E.T. The Extra-Terrestrial. Ever heard of it?

Sure, Hanks is now a successful actor and two-time Oscar winner, but his style has definitely not improved with his advancing age. Tom, if you're reading this, I demand you bring back the suspenders!

Oprah has always had an amazing smile, and this pic confirms that. We miss you on TV, O! You really are the Queen of Talk Shows!

Britney went from a cute teen idol to a stunning and sophisticated woman. If Brit Brit can do it, anyone can!

The metamorphosis of Michael Jackson is pretty darn jaw-dropping. No one can deny MJ's incredible talent, and the massive influence he had on the music industry as a whole.

One thing's for sure: Brad Pitt has some spectacular teeth. What's your secret, Brad??

This little heartbreaker was an obvious Ladies' Man even as a small kiddo. Might want to think about bringing back the tie, John. It's a good look for you.

Macaulay Culkin was the kid that everyone fell in love with in the '90s, and he's still delighting his fans today. Like, for example, when he changed his middle name to 'Macaulay Culkin' after allowing fans to pick his new moniker. That's right. His legal name is now Macaulay Macaulay Culkin Culkin. If that's not going above and beyond for your fans, I don't know what is.