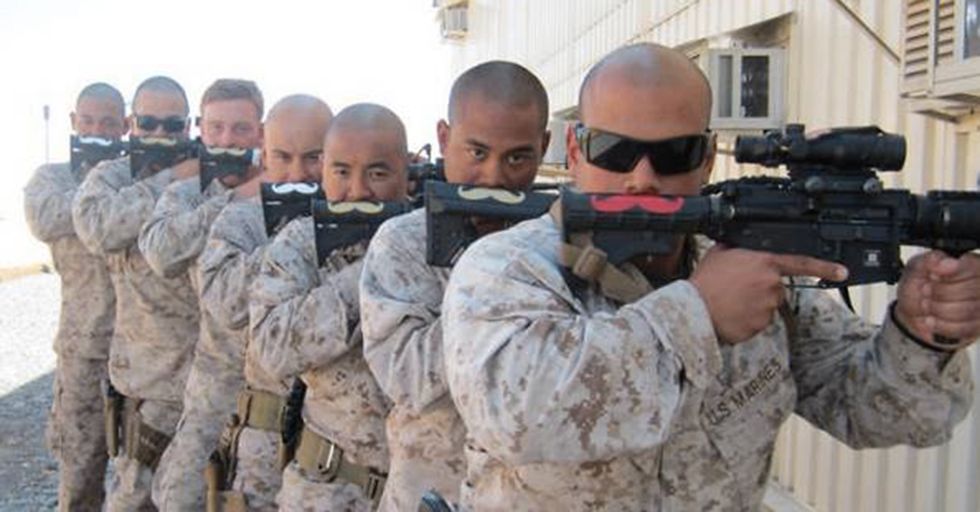 During your enlistment, being a soldier's a full-time job, but that doesn't mean it has to be all brave faces and toughness. Sometimes a dude, military man or not, just wants to cut loose and blow some bubbles. These soldiers aren't going to let deployment stand in the way of a good time, and these pics prove it.

I'm not sure how these guys got so high. Either they're tremendous athletes, or someone's good with Photoshop. Neither one would surprise me.

Hungry? Have a snack.

This is like the third time that this soldier's been written up for eating the Airborne division. He'll never make sergeant at this pace.

You celebrate with whatever you have on hand. If that happens to be a ton of bullets, then so be it. Just keep candles away from it, as you would with a real tree.

Even if you don't think this is funny, you should probably still laugh, because they have big-ass guns. At least a courtesy smile is in order.

I could have sworn he ran this way?

Oh, well. He's clearly evaded us. Let's pack it in and go home, fellas. He's got a headstart. We'll never catch him now.

This would be terrifying.

If tanks weren't scary enough then this should adequately frighten you. I would be unsure if this was a dream or not, so I'd just keep hitting myself, trying to wake up.

Any more REALLY simple rules you want me to follow? I can promise not to hover three feet off the ground. no big deal. I swear.

Beach day on the tarmac.

No splashing around the $100 million jets. They corrode and rust, then it becomes a whole...thing. Also, no horseplay on the wet areas.

This actually looks pretty dangerous. I always think it's funny when soldiers partake in activities that are even more dangerous than war itself is.

I think you'd wake up if you heard THIS land on your roof. Using reindeer as transport is way outdated anyway.

What would you do for a cold beer in the desert?

Would you risk your arm? This guy seems to have no problem doing it. I guess that's just a testament to his bravery.

It's fun t-shirt day on the base.

Unfortunately, the guy who does the laundry put everything on high heat, and now these guys have to look like giants bursting out of their clothes.

There's something comforting about using olden-time, low-tech gear to win a battle. It's good for the soul, if not for the safety of your men.

Bubbles are the language of peace.

I don't know what that means, but it sure sounds nice, doesn't it? And I'm pretty sure no one's ever been shot by a man blowing bubbles. I don't have data, but that's my gut feeling.

Military men take their chores VERY seriously. Fortunately, he's got a guy with an assault rifle covering him, so he can steam the wrinkles right out of those shirts.

Something tells me these guys aren't going to do much to advance the front line. But that's ok. They look adorable doing things this way.