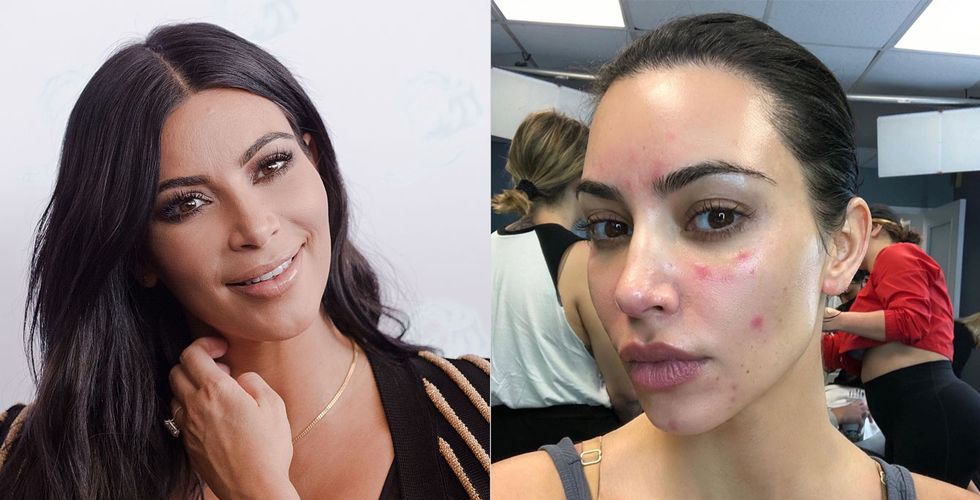 Pictures of Superstar Celebrities Without a Stitch of Makeup On

22 Words Staff
Kim Kardashian is already gorgeous, and her makeup-free selfies are every bit as stunning as her selfies with makeup. That said, a lot of times, when celebrities post makeup-less selfies, they get written about for being brave (which it is, in a culture that (wrongly) places so much importance on women’s beauty). But Kim Kardashian’s selfies here showing herself not only with makeup but dealing with a Psoriasis flair-up is legitimately brave. Her message to others with the condition is important: “you can’t let it ruin your life or get the best of you.”

As you can probably imagine, stars have an arsenal of doctors, stylists, makeup artists, and money to achieve a look that, as you can see in these pics, is a big departure from their natural state.

There’s no shame in dressing up, especially when your physical image is your brand and your livelihood. But don’t get too taken with the faces you see onscreen – they’re often a long way from natural.

Without makeup, Adele looks like a regular person. Of course, there's nothing wrong with that, but when you're the embodiment of heartbreak, it does feel important to look like a diva.

There are two distinct phases in Gwen Stefani's career — the No Doubt era and the post-ska pop mega-star era. Looking at these two photos, I think the only difference might be that after Gwen went solo she started wearing makeup.

I think looking at Courtney Stodden might just be giving me sensory overload, because I honestly can't tell if Courtney Stodden looks pretty much the same in these two photos or incredibly different.

Lindsay Lohan's definitely had her ups and downs, but here we can see that whether or not she's wearing makeup, she keeps it pretty steady, looks-wise.

As a supermodel, Tyra Banks made her bones being beautiful, but today, she's all about encouraging body positivity. Posting this makeup-free selfie is one way she shows that. And wow, does she look good!

As an expert of disguise on Alias, Jennifer Garner has surely gotten used to changing her appearance (even if that was mostly with wigs and not makeup).

See, here's another one. Emma Stone looks just as pretty with makeup as she does without.

If I looked like Heidi Klum, I wouldn't ever wear makeup, honestly... Also, I'm almost starting to think that some of these women are just naturally beautiful whether they have makeup on or not?

Julianne Moore is here to prove that, makeup or not, the most beautiful thing you can do is vote.

One of our most famous models, Kate Moss looks good with or without makeup.

If I worked at a makeup company (and one day, I hope to), I would be infuriated by ow good Hilary Duff looks without makeup.

To be fair, this makeup'd up picture of Jennifer Lawrence is positively full of makeup, from the bright red lipstick to the Black Swan-looking eye shadow.

Listen, Britney Spears was my first crush. I'm going to think she's the most gorgeous woman on the planet until the day I die, and honestly, whether or not she's wearing makeup has no bearing on that fact whatsoever.

Halle Berry's been celebrating what she calls Fitness Friday on her Instagram, and obviously you can't do fitness with makeup on.

Is Kylie Jenner here the first star we've come across who actually looks better without makeup?

Here we have Kate Upton, proving once again that you cannot do fitness with makeup on. If you try, the fine folks working at LA Fitness will stop you right at the front counter.

Remember when Katie Holmes was married to Tom Cruise? That was a weird thing. Did you ever watch Dawson's Creek and go, "Yeah, I'll bet my girl Joey over here will end up with the biggest movie star in the history of the world." What a wild couple. Anyhow, here is Katie Holmes with and without makeup.

How is it that Gwyneth Paltrow looks so regal and elegant, even when she's sitting on a ski lift without a shred of makeup on?

Sometimes, with Lady Gaga, it can be hard to tell if she's wearing makeup or not. The dead give away? Just look to see if she has insanely large gold eyelashes jutting out of her eyes.

When she ditches the makeup, Kesha's freckles really pop. Looking at her in makeup, I'd be hard pressed to tell you whether or not she had freckles at all.

When Megan Fox joined Instagram, she posted the makeup-less selfie on the left, and a ton of websites wrote about her bravery. But honestly, she kind of looks the same? It's less brave to put your authentic self out there when that authentic self is already so likable.

Listen, Beyonce is our queen, no matter the state of her makeup. Long may she reign.

Kim Kardashian is already gorgeous, and her makeup-free selfies are every bit as stunning as her selfies with makeup. That said, a lot of times, when celebrities post makeup-less selfies, they get written about for being brave (which it is, in a culture that (wrongly) places so much importance on women's beauty). But Kim Kardashian's selfies here showing herself not only with makeup but dealing with a Psoriasis flair-up is legitimately brave. Her message to others with the condition is important: "you can't let it ruin your life or get the best of you."

The New Girl star has always felt incredibly affable, and the fact that she's so chill about posting this makeup-free selfie backs that up.

I don't know about some of these makeup versus makeup-free selfies. I feel like anyone who looks as good as Adriana Lima without makeup should just save that time in the morning and skip it altogether.

Between these two pictures, Bar Refaeli could probably go without makeup for a year and not have anyone notice.

These two pictures of pop star Katy Perry almost feel like we're looking at the same person at work and then on vacation. Maybe that's just because, in her second, non-makeup'd picture, she just looks so relaxed?

Whether or not she's wearing makeup, Cameron Diaz is confident in how she looks. And in an attempt to pass that confidence on to other women as they get older, she put out The Longevity Book: The Science of Aging, the Biology of Strength, and the Privilege of Time.

Jessica Alba, superstar actress and CEO of the Honest Company, knows a thing or two about makeup considering she has her own line. That makeup-less pic is a real testament to sunscreen or good skin care.

I absolutely love this makeup-free selfie of Olivia Wilde and her daughters. Pure joy radiates from her face. So sweet!

Miley isn't shy about showing us her makeup-free face, but wow, she certainly looks amazing both ways!

Amanda Seyfried looks radically different with and without makeup, but both ways are stunning. Blondes really transform, especially with mascara, huh? Love these pics? Stay tuned for celebrities who look totally different today than they did in the 2000s!