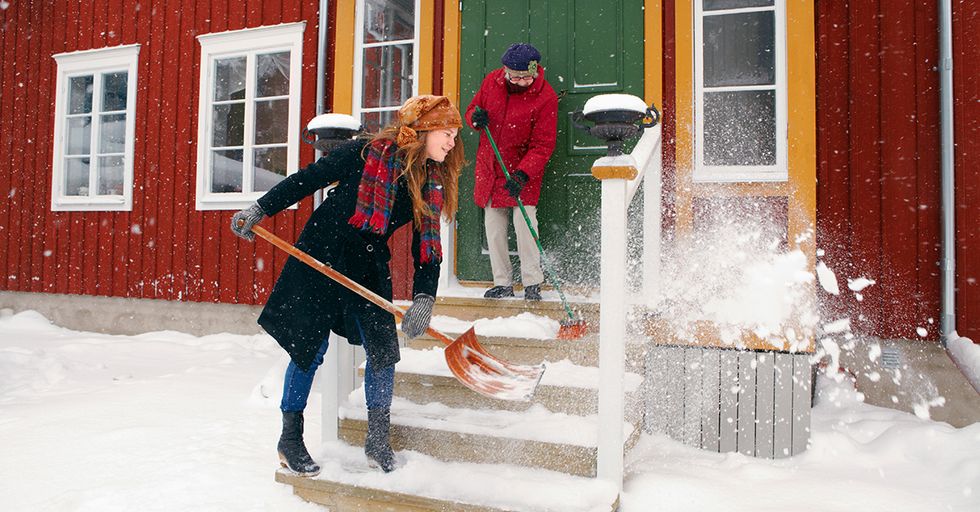 There's something truly special about being from the Midwest.

But a lot of people don't really "get it." That's 'cause they're not from there.

Whoops. That was supposed to say "the Midwest." Oh well. In the winter, it basically is the Himalayas. Anyway, here are some pictures that only true Midwesterners will understand:

First of all, there's a dress code.

Do you have to have a piece of clothing with a wild animal on it in order to live in the Midwest? No. But it certainly doesn't hurt.

As a Michigander, I personally feel a little attacked by this one and did not realize my favorite childhood dinner was something of a sham. What do non-Midwesterners do for taco night?!

And before you go thinking Midwesterners like spicy foods...

The picture above is the Midwestern version of Hot Ones. And honestly, I'm a bit surprised to see the Sriracha on the end there. It might be a bit too much for many Midwesterners.

If you've never had Puppy Chow, you are missing out, my friend.

And no, I'm not talking about dog food. I'm talking about the peanut-buttery, powdered-sugary ambrosia snack that is Puppy Chow (or Muddy Buddies). And speaking of Midwestern snacks...

Whether you enjoy them fried (shout out to Culver's!) or cold and squeaky, a Midwesterner is never too far from cheese curds and their deliciously salty flavor.

And don't forget the Ranch!

Get ready to hear a chorus of "Ope"s!

What does "ope" mean, you ask? It's kind of a combination of "oh!" and "oops!" If you truly want to up the Midwestern charm, you should follow up with "Can I just sneak by you there?"

You think traffic is bad where you are?

You've clearly never been stuck behind a tractor going 15 mph on a 55 mph highway. It's torture.

We can't talk about the Midwest without mentioning the weather.

This side-by-side image of the same place only two days apart is a pretty good representation of what it's like to live in the Midwest. We have a saying there: If you don't like the weather, just wait 10 minutes. And just when you think winter is over...

It's time for second winter.

That's the winter that takes place a couple days after you've mistakenly packed away all of your winter clothes and finally started to feel hope for the first time in months.

But instead of enjoying the warm weather, you're stuck doing this:

Every Midwesterner has made this exact same pose at some point in their lives. It's as universal as kicking the slush off the bottom of your car.

Did you know that we have to shovel our roofs, too?

Otherwise, the snow could damage the roof, causing it to leak or even collapse. If you're lucky, it goes as smoothly as it did for this guy.

Once the snow is finally gone, it's time for Corn Hole!

Forget about it. We skip right to summer in these parts. Although spring sounds like it'd be nice, there's a plus side to skipping it entirely...

So that's why my house is always such a mess. (That's the reason I'm going to use, anyway.)

Other parts of the country don't know about Meijer.

Or about Sandy, the horse you can ride for just a penny! The other regions of the country sure are missing out!

We're polite...sometimes to a fault.

Q: How do you define eternity? A: Four Midwesterners at a 4-way stop.

It's called pop. Not soda.

We have a unique sense of humor.

Midwesterners deal with a lot of roadkill. Luckily, we can handle it with some humor.

Midwest goodbyes are 45 minutes of continued conversation while your hand is on the doorknob in the tiny entrance a… https://t.co/yf2KFz9Ayd
— Sally Keckeisen (@Sally Keckeisen)1514470902.0

I'll never forget the feeling of having my boots, coat, and snowpants on, ready to leave...and just sitting in the entryway for 45 minutes while my parents finished saying goodbye.

Tornado watch? No big deal. Tornado warning? OK, good to know. Tornado in your yard? Probably time to get to the basement.

While you're in shorts. At the beach.

It's a tricky maneuver.

midwest culture is putting your paper plate upside down in the trash so you don’t offend whoever made the stuff you didn’t eat
— devin (@devin)1542913475.0

As it turns out, not everyone in the midwest is a big fan of that JELLO salad containing shredded carrots. (Yes, that's a real thing.)

To this day, I'm still at a total loss whenever I have to bring a dish to a gathering. My mind just immediately goes to cream cheese. Or mayonnaise.

It does your body good.

I personally hate milk, but it was always a beverage option at the dinner table. It didn’t matter what we were eating. Spaghetti. Roast beef. Tuna casserole. Milk was always there.

My dad drinks his with ice cubes!

If you've ever hit a deer, you know that this is actually very good advice. Those things are solid. (Fun fact: In many midwestern states, if you hit a deer, you're allowed to take it home! For food!)

Midwesterners are very familiar with the "jump out of bed and run to the bathroom to hop into the shower" morning routine.

That's quite the range!

Look, it's gonna snow. Maybe a little, maybe a lot. You already know this.

They don't call it the Bible Belt for nothin'.

Many midwesterners take their Bible verses very seriously. But plenty of them have a good sense of humor about it, too.

Sure, you may have just witnessed record-breaking levels of snowfall and the windchill is something like -50ºF, but we're gonna need you to come in.

If you wear your sandals on Monday, you can pretty much guarantee that you'll be back in your snow boots by Thursday.

There are two seaons in the midwest: Winter and construction.

Looks like we'll have to approve Hawaii as an honorary midwest state!

You might be thinking, "What the heck is a corn pit?" Well...

This is a corn pit:

We also love a good sawdust pile with pennies hidden in it. You know, for kids.

This is what happens when you go outside with wet hair in the winter:

When we say it's cold, we mean it's cold. But we still know how to have fun.

Many midwesterners use their porch as a secondary fridge during the winter, anyway. If you're ever looking for beer at a midwestern winter party, check the deck.

The photo board. The cake. The corn hole. Looks like early summer to me! Share this with a fellow midwesterner!