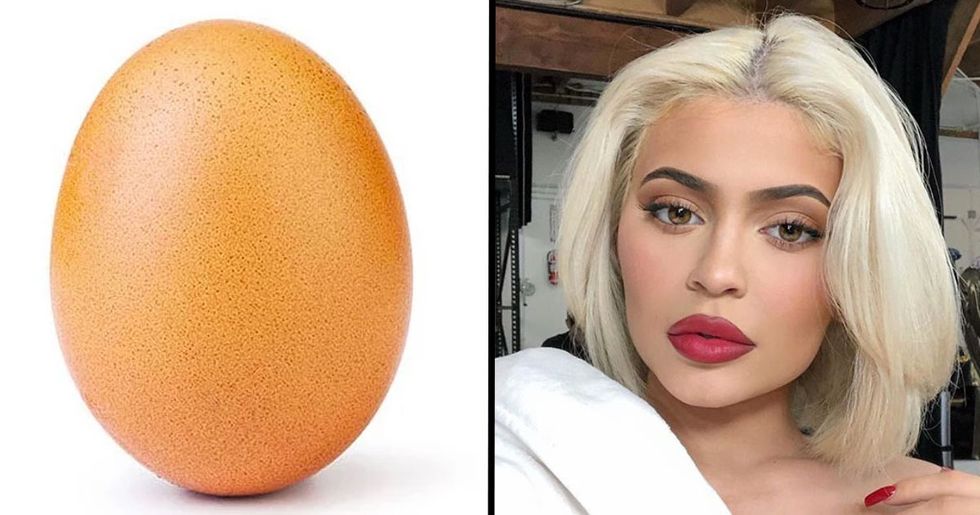 This is why aliens don't visit us. Some chick defeated another chick in the battle for Insta-fame.

Kylie surely felt pretty bad about her loss to a regular brown egg. Or not. She's actually responded and it's hilarious.

It seems that the goal to dethrone Kylie might have been set simply out of boredom. But since it has received such huge success that has passed all expectations, people have come up with some pretty convincing theories. Most users believe it's people just trying to show how much they dislike Kylie. But others have suggested it could be the public's subtle rebellion against today's TV culture.

Others think it might be a promotional strategy from either Kylie's or some new company's side. There might be a new product coming up soon...

Where is Shane Dawson with his conspiracy theories when we need him?

How did a simple stock picture of an egg become the most liked Instagram post of all time?

On Sunday evening the egg beat Kylie Jenner with over 18.3 million likes, BuzzFeed News reports. But people didn't stop there and now it’s about to hit 28 million. It's as if the world is trying to show just how much they don't like Kylie.

Kylie held the previous record for almost a year.

She posted a picture of her newborn daughter, announcing her name, Stormi Webster, for the first time. It's currently got over 18.3 million likes.

In the caption they wrote, "Let’s set a world record together and get the most liked post on Instagram. Beating the current world record held by Kylie Jenner (18 million)! We got this."

On Sunday morning, the egg already had around 9 million likes.

In just 10 hours the number doubled, breaking Kylie's record, BuzzFeed says. The egg was getting around a million likes per hour!

BuzzFeed News contacted whoever was behind the egg's account.

They replied saying that the account was held by Henrietta, "a chicken from the British countryside." "Henrietta declined a phone interview, but agreed to answer questions via email."

"She said she thought the egg had really taken off, because 'the power of the egg is strong.'"

The chicken also said she started the campaign after she "stopped drinking for Dry January."

She said she "was home last Friday night when she 'read an article regarding the top 20 posts on Insta, Kylie Jenner topped it with 18m.'"

"I saw this as a challenge to beat it," Henrietta wrote. "It was nothing personal."

And when BuzzFeed News asked her what she thought of her overnight fame, Henrietta replied, "Cracking." That's one funny chicken right there.

She also added that she likes her eggs "in the morning."

But when she received complaints from vegans, she assured she wasn't going to eat it.

When BuzzFeed asked her whether it was the chicken or the egg that came first, Henrietta answered, "The Egg Gang."

In response to her loss of crown to an egg, Kylie posted a video in which she cracks and fries an egg on the hot summer road.

The Verge reports that when the egg reached the new world record, the account holder Egg Gang shared on her Insta Story, "This is madness. What a Time to be alive."

But Egg Gang is not the first user to try and gain millions of new likes or followers with a joke account, The Verge says.

It did just that with over 635,000 followers. But there are many others trying to gain quick and easy likes.

BuzzFeed also reports that some people were so dedicated to getting the egg to break the world record that they flooded Kylie's photo of Stormi with comments encouraging people to join in.

According to BuzzFeed News, Twitter's default profile photo for new accounts used to be an egg, but they had to change it in 2017 after "anonymous egg accounts became associated with harassment on that platform."

The egg's success even inspired people to copy the account for similar purposes.

Here's what people participating in the "campaign" have shared on social media.

Kendra Latrice: "That’s shocking...they have the same amount of talent!" Shel Shelley McLennan: "This is the glorious weirdness I miss about old internet. Glad to see it resurface; maybe 2019 WILL be ok!"

Lori Hessler: "History books show us that people in 2019 were bored out of their minds."

Haley M Archer: "Everyone who liked this are so petty *goes and likes immediately*"

Nannette Villanueva Medina: "90% of those liked were the people who can’t stand Kylie."

Thaisa Cruz: "Well, it’s an egg and it serves a purpose, unlike Ms Jenner whose only purpose in life is to get surgery and pose."

Shannon Thomas: "I don't want to live in this world anymore..."

Julie Iasevoli: "If this doesn’t tell you how the general population feels about the Kardashians, then idk what will. Go egg!"

Steven Mackie: "And I was one of the first 100k lol" Brandon Ramos: "The question is....DID KYLIE LIKE IT?" As a matter of fact, she did.

Mckala Ottey: "Not to be dramatic, but I would die for that egg."

Meanwhile, some people used the opportunity to drag their friends. Rogan Van Aswegen: "Leah, I can't believe a picture of your forehead beat Kylie Jenner."

Daniella Claudia: "I’m so proud of whoever’s behind that account." supernatural: "Let me just say I am PROUD to be part of this internet history."

Olivia: "Man I’d really hate to get passed up by an egg."

BCoto: "At the end of the year this will be the highlight of January, great!" Collin Williams: "If this is any indication of how 2019 is gonna go then buckle the fuck up cuz it’s gonna be wicked."

Des™: "By [tomorrow] this egg will have more likes than Kylie Jenner. So don't get so sad about thinking [you're] an egg."

Sam Ratcliffe: "Spent some of the morning writing a blog post about an egg getting more likes on Instagram than @KylieJenner... Interesting start to the week."

Shelbs: "I don’t know whether to laugh, be embarrassed or proud of the generation I live in that an egg surpassed Kylie Jenner as [most-liked] Instagram picture."

Muhammad Dawar Khan: "You know the world is becoming a better place when an egg is beating Kylie Jenner."

Meanwhile, TechCrunch suggests this whole egg joke might be a promotional trick.

You can hate Kylie all you want, but there's no denying that she's a good entrepreneur (or at least she has a great team around her). TechCrunch reports that "her two years old Kylie Cosmetics brand is estimated to gross over $600 million in annual revenue."

So even though the egg situation is quite funny, it may not be the whole story.

TechCrunch says "the egg could be a rejection or protest of today’s reality TV culture… which is best embodied by the Kardashians and, in particular, Kylie Jenner."

It's easily to see why if you just look at the egg-related comments on the egg's Instagram page and on Stormi's photo.

But it might just be one of those quick-fame internet phenomenons that no one can explain.

TechCrunch agrees, "It could simply be a joke that blew up."

"But don’t discount the potential that this is a stunt from a company launching a new product or wanting to make a splash."

Then they added, "It doesn't end here though, we're only just getting started."