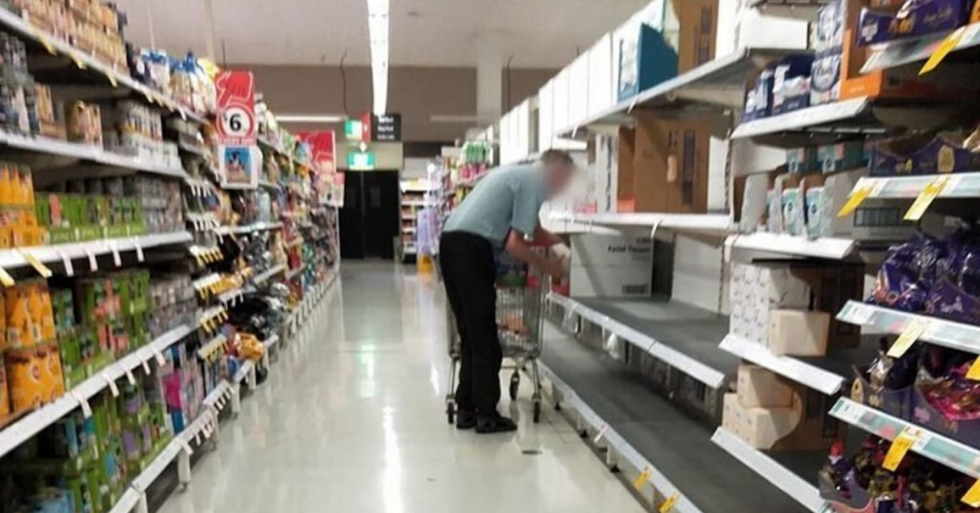 Keep scrolling to learn about the unfortunate elderly man in Australia who was unable to buy toilet roll because of this mass hysteria...

We are currently in the midst of a global medical crisis.

It has been confirmed by Worldometer that 3,408 people have now died globally, with the majority being in mainland China. A further 100,379 people have been found to carry the virus and be infected.

The virus continues to rapidly spread, and traces of the disease have already been discovered and confirmed in 8 other countries including here in America, the U.K, Italy, Thailand, South Korea, Taiwan, Saudi Arabia, Japan, and Australia.

The people of Australia are in a mass panic right now...

According to the Australian health department, there are currently 59 confirmed cases in the country with 2 people now dead from the virus.

The toilet roll sold in Australia is made locally...

The women behind me at the Aldi check out #toiletpaper #coronavirusaustralia https://t.co/XnenmvnQaR
— Sonia G (@Sonia G)1583227796.0

So there is no chance of it running out... meaning these individuals are wasting not only their time but the time of innocent people needing to purchase their essentials.

This is causing a nation-wide panic...

And some poor people have been left unable to buy toilet roll when they actually need it.

Perth resident, Justine Bowers, came across the most heartbreaking thing recently when doing her grocery shop...

She stumbled across an elderly man desperately looking for toilet rolls amongst the empty shelves.

Here is the heartbreaking picture...

"This absolutely broke my heart seeing this old man grabbing tissues because there was no toilet paper left!" Justine wrote on Facebook. "I offered him the very few toilet rolls that I had as I couldn't bear to see him go without! Pull your f****** head in people and stop panic buying toilet paper!!! And shame on all the people who have been buying in bulk because it's affecting so many people who aren't fortunate enough to do so!"

And it truly outlines how this manic bulk buying is terribly affecting those who are less fortunate. Make sure to stay posted for further updates on this crisis...