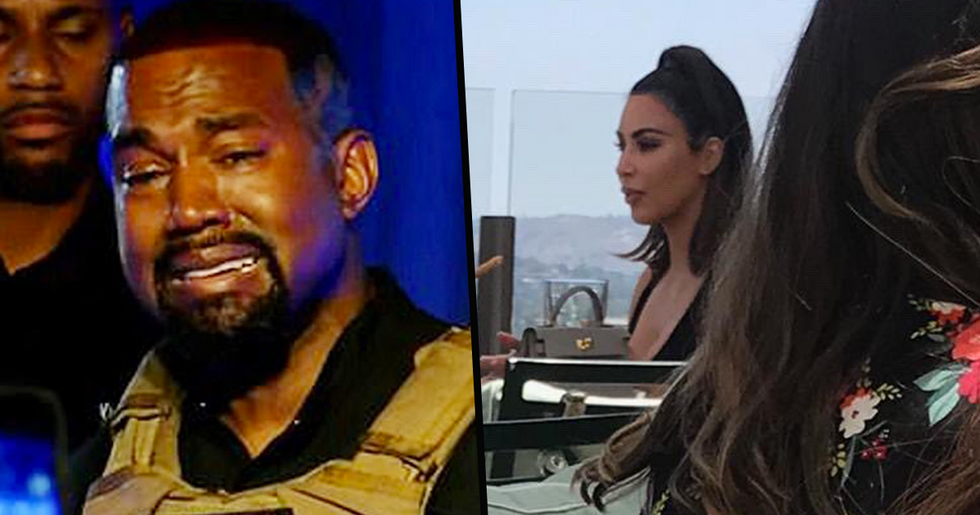 Following Kanye West's alarming and very public breakdown over the weekend, Kim Kardashian has done her best to gain control of the situation but to no avail. The rapper went on multiple Twitter rants in which he exposed many alleged "secrets" about his marriage with his wife, including cheating scandals.

But even though one of the alleged people Kim cheated with, Meek Mill, tried to explain that it was all just rumors, it seems as though some "evidence" has been dug up that goes against that.

Keep scrolling to have a look at the picture that recently went viral...

Right now, things are not going well for the Kardashian family, at all.

Over the weekend, Kim Kardashian's husband, wannabe president, Kanye West, hosted his first campaign rally and, let's just say, he really opened up a can of worms.

Kanye has gone off on multiple Twitter rants in the aftermath of his rally, where he claimed a lot of detrimental things about his wife and her family.

But now, the other mentioned name, Meek Mill has been dragged into all the mess...

And it has only made the situation worse. But as more and more "evidence" gets dug up, we're all out here holding our breath...

Now, it all started when Kanye got involved with the Kardashians back in 2011...

But after announcing that he was going to run for President, things started getting difficult for the rapper.

I think we were all thinking the same thing: Is this a good decision? And has he had enough experience? Well, back in 2018, Kanye, who is an avid Trump supporter, sat down with the president in the Oval Office where he proclaimed his support and declared Trump a “hero" in a bizarre, rambling televised monologue that spawned myriad parodies.

Granted you have millions of dollars and a handful of powerful friends... And a massive Twitter following.

I bet you're wondering where all this is coming from, right?

Well, it started when Meek Mill and Kim Kardashian (as well as Clara Wu Tsai, claim TMZ) met up in a restaurant in order to discuss prison reform.

They both work with the same organization called Cut50, which aids criminal justice reform.

So, all because of a business meeting to help incarcerated prison inmates, we have all this extra drama?

But to Kanye West, it all seemed a little fishy... Of course.

Even after a "witness" claimed she saw Kim leave the restaurant by herself as soon as the meeting was over, his inner jealousy made it difficult for him to trust his wife, which then led to him making these alleged "cheating" claims.

But Meek Mill wasn't having any of it...

After seeing his name being dragged through the dirt, he released a short statement in which he claimed the rumors were all lies.

For those of you that aren't familiar, the word "cap" means lies. He didn't really say much beyond that, but we have both sides of the story now, with other people backing up their claims that nothing happened.

But some "evidence" has recently been pulled up.

A photograph taken by a witness has recently gone viral showing the alleged "meeting" between the two parties. And as you can see, Clara Wu Tsai is also sat at the table, so it's hardly a date... Unless she loves third-wheeling.

But some people weren't convinced.

If you don't know what this comment means, keep it that way.

These users think Kanye was there with a hat and a pair of sunglasses...

Clearly trust is not a key aspect in their relationship at all.

Well, reports are now suggesting that Kim may very well be looking for a divorce.