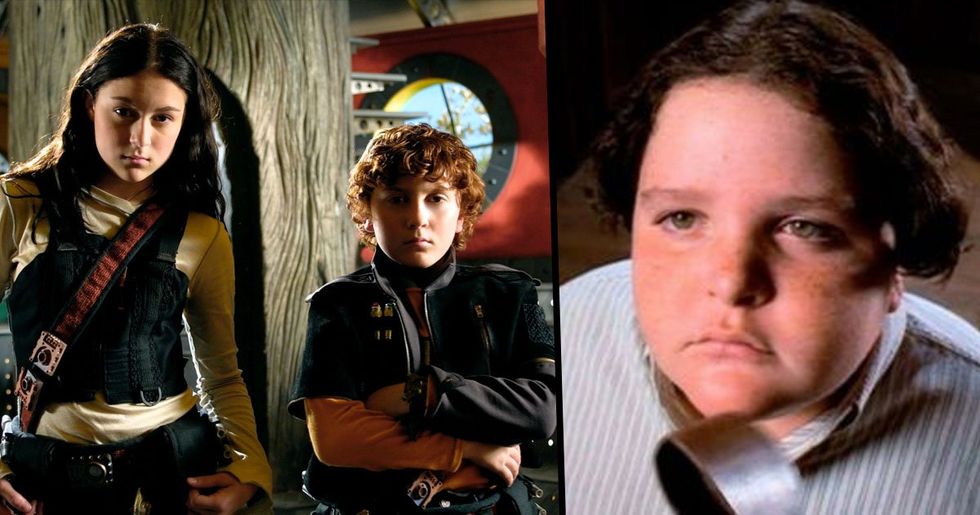 But what are our favorite child stars doing now? Did they end up like the kid from The Sixth Sense or did they blossom into a Josh Peck?

There's only one way to find out! Luckily for you, we've done the hard part. Keep scrolling to feel extremely old.

Who's that cool little tomboy working with Jodie Foster?

Of course, it's cool little KStew shooting Panic Room with Foster circa 2001. And here they are again, some fifteen years later at Jodie Foster's Hollywood star ceremony. I've heard that if you spread a story enough, it may well come true... rumor has it there's this new feature film starring Stewart and Foster and it's going to be massive.

Did young Demi Lovato inspire your style choices back in the day?

After a tough couple of years, it looks as though Demi Lovato might be back on top.

They have blossomed into strong and successful young ladies.

Who's that young girl starring in one of TV's many forgotten TV period dramas?

Oh, of course! It's Hollywood actress, Shailene Woodley. Before she made her big break in 2011's The Descendants, alongside George Clooney, Shailene starred in many lesser-known TV shows.

Can you believe that Wizards of Waverley Place was released almost twelve years ago?

And can you believe Selena Gomez looks exactly the same? The actress hasn't been focussing on movies of late; instead, she's been throwing her energy into charity work and other meaningful pursuits.

Michelle Trachtenberg certainly isn't looking her age. At thirty-three, the Buffy the Vampire Slayer and Gossip Girl actress has been absent from our screens for the past couple of years. Trachtenberg is currently starring as a voice actor in a comedy web series called Human Kind Of. If it's as cool as Trachtenberg herself, I'm sure that it's well worth checking out. But remember when she kissed her dad, Zac Efron, in 17 Again? Ew, ew, ew.

Zac Efron was just nineteen when he starred in High School Musical.

Spy Kids, Alexa Vega and Daryl Sabara first blasted on to our screens in 2001.

Alexa PenaVega (as she goes by now), since marrying Big Time Rush dreamboat Carlos Pena Jr., starred in Dancing with the Stars in 2015 and has since been in a bunch of Hallmark movies. Her co-star, Daryl Sabara, has steered more into the realm of voice acting since his child acting days. He currently voices "Heatblast" in the popular kid's cartoon, Ben10. Sabara is also married to none other than Meghan Trainor.

Melissa Joan Hart is as much a symbol of the '90s as Jenifer Aniston's hair.

With the Netflix Sabrina reboot getting its second series, those who remember the original are wondering what's going on with Melissa Joan Hart these days. She achieved a childhood dream in 2008, opening her very own candy store. The store was called "SweetHarts" (very clever..), but it closed in 2011 due to a racism row with an employee. Yeeesh. Who knows though, from this press pic taken in 2019, maybe SweetHarts will be making a comeback?

Do you remember that weird live performance that he did on the Today Show in 2016? Accompanied by his band, The Angels, Corey Feldman performed their song "Go 4 it." Personally, I don't get what it is that they're trying to do, but, eh, whatever. It's Corey Feldman, he can do whatever he wants.

Drew Barrymore's face makes me feel calmer about the state of the world... anyone else?

Drew Barrymore is the friend that I've always wanted. She's goofy, she's cool, and she'd definitely come round with sushi burritos when I'm feeling blue. The first pic was taken on the set of Saturday Night Live in 1982. The second pic (with long term pal, Cameron Diaz) was taken this year as the two Hollywood actresses came out to support Lucy Liu getting her star on the Hollywood Walk of Fame.

Who's that kid with a young Demi Moore?

Why it's Gabby Hoffman, of course. Did you know that Hoffman's mom, "Viva" was one of Warhol's "Superstars?" Gabby and her mom lived in the infamous Chelsea Hotel for most of her childhood.

Baby Wil Wheaton was the poster boy of all things pure and good.

Adult Wil Wheaton looks like the kind of manchild-husband who gets into arguments with his sister-in-law over his poorly formed political views. Well, maybe I'm being harsh... From all accounts, Wheaton's a nice guy. He's a writer, blogger, actor, mental health activist, and winner of the Weakest Link. Fair play.

Anna Chlumsky is our girl.

Chlumsky pulled at our heartstrings in 1991's My Girl and taught a generation of American girls that being a little different is no bad thing whatsoever. The thirty-eight-year-old now has two children with husband, Shaun So, who she met at the University of Chicago whilst doing a BA in International Studies. In the first pic, we see Chlumsky with her mother whilst filming My Girl, circa 1991. The second image is from 2019 and is taken of Chlumsky at the premiere of the Netflix original, Wine Country.

The other star of My Girl, and plenty of other films to boot, Macauley Culkin, has raised eyebrows over the years for his gaunt appearance and erratic behavior. But in 2019, I'd say that Culkin is looking pretty sharp, pretty sharp indeed.

Raven Symone first appeared on our screens at four years old starring in The Cosby Show (I know...). She later went on to star in Disney's That's So Raven and is now starring in the spin-off, Raven's Home, wherein Raven's character from the much-loved original series returns as the mom of two kids. Aw.

Remember the little girl who played Cindy Lou Who in The Grinch?

Well, that little girl was Taylor Momsen. What's she up to now? Taylor has done a bit of acting since she was a kid but, mostly, she's busy touring the world with her rock band, The Pretty Reckless. I didn't see that one coming...

Frankie Muniz is the boss of Frankie Muniz. "What's that guy up to nowadays?," I hear you ask. Well, according to the Malcolm in the Middle star's Instagram, he's still acting (a little), he hosts Dancing with the Stars Juniors, he runs an organic olive oil company with his girlfriend (?), and he plays golf! Fair play, Mr. Muniz.

Does anyone remember the girl who starred in the Pepsi adverts in the '90s? The cute, curly-haired, dimpled kid who demanded a Pepsi from the likes of Marlon Brando, Joe Pesci, and Aretha Franklin? That kid was Hallie Kate Eisenberg. Hallie gave up the acting life in 2010 after going to College. So wholesome.

The Cheaper By The Dozen, Suite Life of Zack and Cody, and Step Up star has certainly not disappeared into obscurity. Stoner is a serious dancer and is apparently the youngest person to teach a master class in hip-hop classes at the Los Angeles Millenium Complex. Wow. She's also breaking into the music industry. Her recent release, 'Stripped Bare", grapples with the difficulties of being thrust into fame at such a young age.

Our favorite werewolf is all grown up.

Did you have a Taylor Lautner poster in your teenage bedroom? The teen heartthrob is now a fully grown man! He has been in the United Kingdom for the past couple of years working on the popular BBC series, Cuckoo. However the twenty-seven-year-old still apparently lives at home with his mom and dad in Valencia, California, though he has stated to GQ that the living situation suits him, as it keeps the paparazzi off his back and gives him the opportunity to live a normal life.

Remember when Ross and Rachel had a kid?

Turns out, baby Emma was actually played by twins, Cali and Noelle Sheldon. If you want to find out which Hollywood horror movie these twins acted in recently, you can read our article all about it here.

Do you remember Eva Longoria's kid in Desperate Housewives?

Well, that cute kid was actually Demi Lovato's half-sister, Madison De La Garza. Madison is now seventeen and, according to her Instagram, she now considers herself a screenwriter. We're excited to see what movies she'll come out with.

The cute kid from Stuart Little isn't so little anymore.

Jonathan Lipnicki, who starred in Stuart Little, Jerry Maguire, and The Little Vampire, is now a grown man. Lipnicki is still in the public eye, more recently for his Reality TV work.  Lipnicki was on the British reality show, Celebs Go Dating, last year. The twenty-seven-year old's appearance made headlines as he stormed out of his date following comments made by another contestant regarding his popularity as a child star. Jonathan said to the cameras: "If someone can only see me for the child actor I was, that's going to be a huge issue in a relationship." Maybe being the cute kid from Stuart Little isn't all its cracked up to be.

Remember the kid from Kramer vs Kramer?

Justin Henry played Meryl Streep and Dustin Hoffman's little guy in the wonderful Kramer vs Kramer in 1979. Henry was nominated for an Academy Award for his performance in Kramer; he's the youngest actor ever to be considered. So, what is he up to now? Well, he's dipped in and out of the movie business since the '80s, but his current focus is much more office based. Henry was the platform director for AOL and is now the Director of Business Development for media agency, Varick. Isn't life strange!

Ever wondered what happened to Cody after Dexter?

Well, after everyone found out that his step-dad was the Bay Harbor Butcher (sorry for the spoilers), Cody, or Preston Bailey, as he's also known, has done a little acting and a little growing. Isn't he big now! Nineteen-years-old big. Bailey's most recent movie, Across my Land, was an official selection in the Cannes Film Festival. Keep your eye out for Preston Bailey.

Christina Robinson is still on the acting horse, too. The twenty-one-year-old is signed up to multiple movie projects and has had several successful roles since Dexter. According to her Instagram, all Robinson wants now is to be well-traveled, well-read, and well-fed. I'd say that's a great set of ambitions to live by.

Matilda - the cleverest kid in class.

Mara Wilson is still one smart cookie. Now thirty-one, Mara has retired from the world of acting, and, instead, focuses on writing and making podcasts. Wilson is vocal about her views and is certainly worth a follow on Twitter.

Bruce Bogtrotter - the boy who ate the chocolate cake.

Do you remember the boy that ate all that chocolate cake in Matilda? The one that we all massively related to? "You can do it, Bruce!" has become the phrase of encouragement to anyone trying to finish anything ever since that movie was released. Well, where is he now? Jimmy Karz who played Bruce in 1996, is now thirty-four and has made a complete transformation since we last saw him. I've got no idea what he is doing career-wise since leaving showbiz, but I can tell you one thing for sure... I certainly wouldn't recognize him in the street! That's all for now, folks!