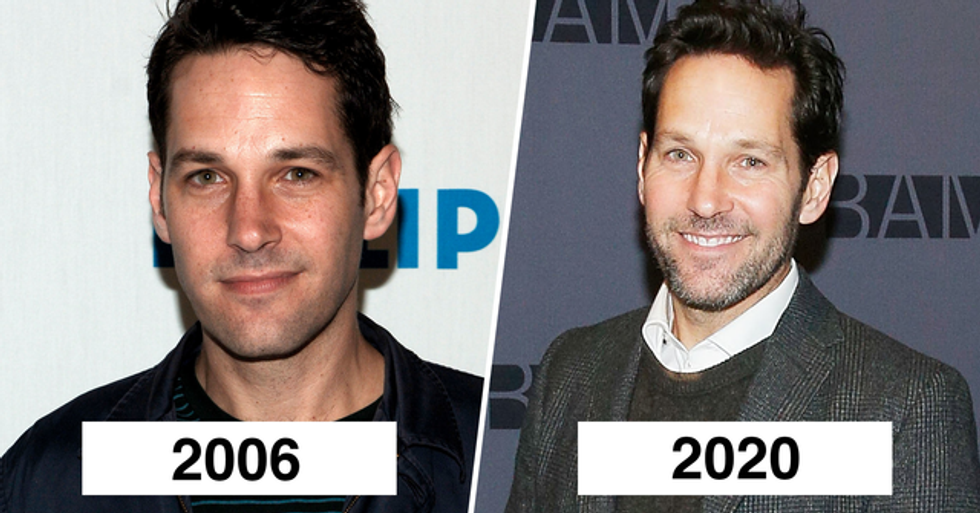 People have been going crazy after seeing pictures of Paul Rudd throughout his career... Because they show that the actor simply hasn't aged in decades.

Keep scrolling to see the photos, and to see his enviable youth throughout the years...

Paul Rudd and his eternal youth are one of the bigger mysteries in life.

For years now, people have marveled at how the actor has seemingly frozen in time when it comes to his age.

What is his secret?

A killer skin-care routine must be involved to look this good...

How can someone with such a busy life still look this young?

We have compiled together a series of photographs that span across the 3 decades of his onscreen performances... And he looks exactly the same in every single one of them. Keep scrolling to see for yourself...

Here, we have a young and fresh-faced Paul in his debut role in the NBC drama, Sisters, where he played Kirby Quimby Philby.

We all remember Paul's role as the loveable stepbrother in the iconic chick-flick, Clueless. Only 3 years on from his debut, Paul hadn't aged a day.

Halloween: The Curse of Michael Myers, 1995.

Following on from his role in Clueless, the actor went on to test the waters in the world of horror.

The following year, Paul took on the role of Dave Paris in the 1996 adaptation of the Shakespearean romance story. Again, there isn't much of a difference in his appearance, is there?

Alongside an equally as youthful Reece Witherspoon, Paul still hadn't aged a day since his debut... Okay, it had only been 6 years.

Then came his role as George Hanson in The Object of My Affection... Yep, still looks pretty young here.

A couple of years later, Paul played the role of Andy in the comedy, Wet Hot American Summer, and he looked as young as ever.

The role most of us will know and love him for - A decade on from his debut, Paul played the role of Phoebe's love interest, Mike Hannigan in the iconic sitcom, Friends.

If anything, he looks even younger in this movie than he did in any of the others.

Anchorman: The Legend of Ron Burgundy, 2004.

Okay, Brian Fantana's mustache and questionable hairstyle make him look decades older... But, under all that fake hair, you can still see his youth shining through, as bright as ever before.

In 2006, Paul made a very brief appearance in Night of the Museum where, you guessed it, he didn't look a day over twenty-one.

Paul starred as the loveable, yet slightly whipped husband, Pete, in the stoner comedy, Knocked Up. Again, he hasn't aged a day, has he?

Fast forward a few years, and the actor is still looking ridiculously youthful, despite playing a parent going through some sort of mid-life crisis.

Here, Paul plays the role of the lonesome, rock music-loving Peter who is in the desperate search of a best man for his wedding... And, of course, he looked as young as ever.

I feel like I'm running out of things to say about his ridiculous good looks, here...

Okay, finally there are some signs of aging here... Or maybe it's just the 5 o'clock shadow?

Okay, maybe it wasn't the stubble... After a hair cut, Paul is back to looking nearly as young as his 1992 debut.

Slightly stragglier hair, but as wrinkle-free as always.

The actor made his Marvel Universe debut with the starring role of Ant-Man and, despite a few cuts and bruises, he looked just as amazing as ever.

Despite him desperately trying to look ten years older... He just didn't. Even with the wig and fake beard. He looks younger, if anything.

Last year, Paul appeared in the most successful movie of all time... And, of course, he didn't look a day over thirty.

And, most recently, Living With Yourself, 2019.

How is this man fifty-one? Keep scrolling to see his birthday celebrations, and people's reactions to his age...