The Polar Vortex Is Insane, and These Pictures Prove It | 22 Words 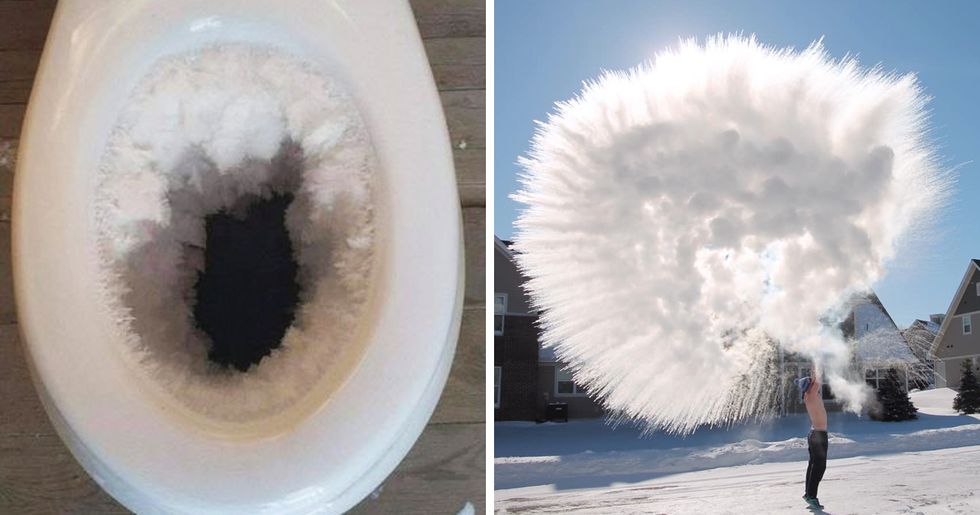 The Polar Vortex Is Insane, and These Pictures Prove It

Remember when Game of Thrones was all like, "Winter is coming"? Yeah, well, winter is officially here. Due to a little thing called climate change, extreme weather conditions of all types are becoming more and more common. This January, the Midwest began experiencing a "polar vortex," which is pretty much as sinister as it sounds. A polar vortex is a swirling mass of strong winds that bring extremely cold temperatures. This is literally arctic air that is traveling south to the United States and bearing down on populated places like Chicago and the entire state of Michigan.

I mean, we are talking record-breaking low temperatures (can you say negative 50 degrees? probably not because your teeth are too bust chattering) that feel even colder thanks to a gnarly wind chill factor. People were not designed to exist in temperatures as cold as these. Some are braving the intense cold to snap pictures that prove just how cold it is.

More like Jon Ice and Wind and Insane, Below Freezing Temperatures!!

Yeah, I don't think that's supposed to happen to your toilet. What do you even do when this happens? That whole toilet's busted.

I don't know who thought it would be a good idea to eat lunch outside in below freezing temperatures. Do you realize how cold it had to be for the noodles to freeze in that position?

The newest, hottest (coldest?) Instagram beauty trend is frosted lashes. All you have to do to get them is go outside during a polar vortex.

He's a firefighter. A firefighter! That is one of the warmest jobs you can possibly have! This is not OK!

The Day After Tomorrow

This seriously looks like some apocalyptic scene, and you know what? It is. We are in the middle of the apocalypse, and no one in charge wants to do anything about it!

Bubbles are freezing mid-air. I'm not going to lie; these are really cool-looking, but it's still not supposed to happen.

Did you hear that? Railroad workers are purposely setting fire to the tracks to keep them warm enough for service to continue. This seems, hm, what's the word? Unsafe!

Yup, that is a pair of jeans standing up on their own. Don't worry, it's not a completely haunting image that will come to me in my nightmares or anything.

I have to admit that I thought about what it would be like to use this toilet paper, and I giggled a little. I'm sure this admission won't come back to haunt me.

It would probably be pretty satisfying to pee all over this because your pee would be warm and melt the ice...OK bye.

At least the ice sign is falling down, which has to mean the ice is melting, right? Right?

What can you even do with these? I don't think you can cook them and eat them. This is something I never thought I'd see a picture of.

The ice is inside

OK, when the insides of your buildings are starting to look like this, you know that human life was not meant to handle this level of cold.

The first shocking thing about this photo is Jesse's ice beard, but then you see the burning car...

Pretty sure this really is not supposed to happen. What do you do? Call your landlord and be like, "Um, the house? It's turned into ice now"?

Those are some starchy clothes. Actually, I'm just getting word that they are frozen. Not starch. Ice.

I don't think I've ever seen a bottle of frozen vodka. I've been in a bar made completely of ice, and the vodka wasn't even frozen there.

Get it? Icy you? Like, "I see you," except that you don't because your glasses are icy.

My brother was on one of the few flights into Chicago this morning. He took this photo of frozen Lake Michigan from… https://t.co/9rSnz2deIt
— David Funk (@David Funk)1548869863.0

Do you know how big Lake Michigan is? It's really big! It needs to be really cold for that water to freeze.

Well, this defeats the purpose of fire hydrants. It looks like it's throwing up because it's too cold out.

This doesn't look like a peephole so much as it looks like a tunnel through the snow.

At least during the polar vortex, you can always tell if your car is leaking from its tailpipe. That's the silver lining, I guess.

How does this even happen? Was it raining sideways onto the tire and then freezing instantly? What's going on here?!

I guess soap freezes. It makes sense. It spends its life getting covered in water. But I just never even thought of it being a possibility.

Does this person not have any heat in their house? Turn on the heat for goodness' sake!

Cars were not made to handle this extreme cold. Nothing was. We are all at the mercy of the weather.

Of course, you probably saw that people started taking buckets of hot water outside, throwing them in the air, and watching them freeze instantly. This is that. No word on why the guy is shirtless. Seems unnecessary.

It should be illegal for a landlord to turn down the heat in the middle of a polar vortex. It could seriously be dangerous! Share this with someone to show them how cold it really is out there.