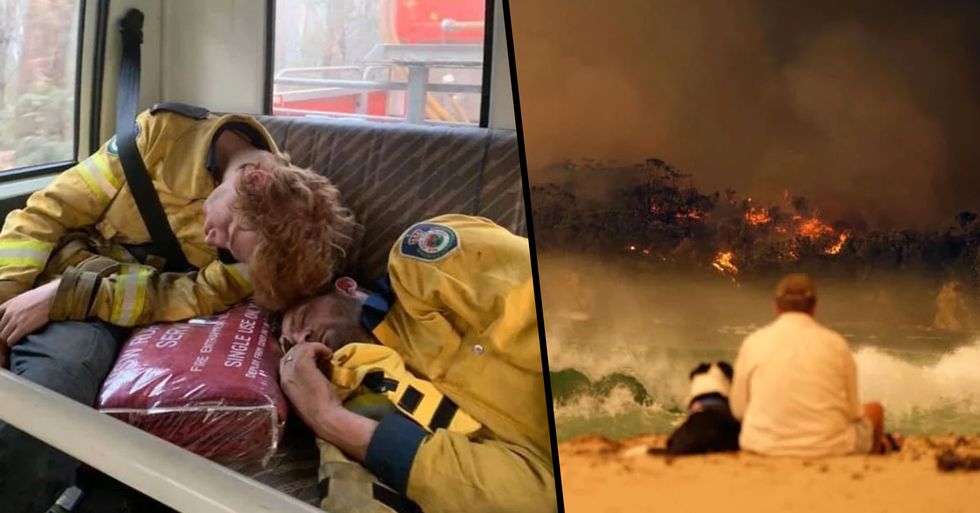 The internet has shared some of the most devastating images of what's going on - and it makes for absolutely heartbreaking viewing.

This sense of hopelessness is just too sad.

Relying on one another can be necessary for survival.

"Since the fire has passed through Mallacoota this amazing, selfless young guy has been out searching for injured wildlife. This is one of 7 koalas he's saved so far."

"I'm so proud of my country, our volunteer firefighters are legends in their own category."

"This is a picture of my Dad getting 5 mins sleep on our front lawn, while my brother keeps watch over the fire burning at the top of our farm after he finished his 10th 12 hr+ day in a row fighting voluntarily in the community with the RFS NSW."

This cute border collie has been doing the most to protect her flock.

The skies have been in shades we've never seen before.

Anything to get some relief, hey?

This woman literally used the shirt off her back to save this koala.

Get some respite wherever you can.

These volunteers are true heroes.

It's hard to believe that this is real life.

This is too adorable for words.

Some of these pictures look almost fake.

This truly depicts how devastating this pollution is.

This is truly terrifying.

It's tragic to think about his friends who weren't so lucky.

"After logging 776 hours of firefighting in the last ten weeks. No end in sight. New fires keep starting. Another four months of the fire season. Trucks literally being worked to death 24/7. Equipment breakages. Crew injuries. Fresh untrained crew needing guidance. Logistic nightmares. Missed meals. Etc. I finally have 48 hours where I'm not permitted on a fireground. It's bliss. My body isn't coping with the comedown though. Headache, nausea, shakes."

"I’m in Melbourne, which is hundreds of km’s away from the fire zone. But there is a fine ash covering everything, my car is filthy and it’s pointless to clean it as it will just get covered immediately. The sky is permanently full of smoke, but it’s high up where I am so you can’t smell it much, but it blocks off most of the blue light so everything has a reddish tinge to it."

"No filters. Australia is red from wildfires."

"Hell opens up in Australia. Thoughts go out to our brave firefighters."

We can't imagine a scarier sight.

26. A moment of happiness

"Firefighters literally dance in joy as rain falls over raging bush fires that have burned across Australia for weeks."

That glow is eerily bright.

The sheer amount of soot in the air is staggering.

"Do you see this? This is our world. 4000 people are currently sheltering from the devastating fires in Australia on a beach."

"My uncle at the end of a 13 hour shift volunteering with NSW RFS."

This one is truly heartwrenching.

"My son is 1 month old, he's never breathed fresh air in his life."

17. Fighting until the end

This picture really depicts how exhausting the firefighting is.

There's something about a fire inside a window that's even more horrifying.

An 11-year-old child steering a powerboat.

The city is almost completed encased in a layer of smoke.

The amount of pollution in the air is totally blocking out any blue light, giving this scary effect.

"Over 1000 people forced onto a beach by out of control fires. They are surrounded with no escape except to swim."

It's incredible that people continue to fight in the face of seemingly impossible odds.

"The fires from Australia are so massive that our skies in New Zealand have turned yellow (1,600 miles away)."

"This is a pyrocumulus cloud produced by smoke from the Australian bushfires. It’s 12km high. It produces its own thunderstorms, fire tornadoes and 100km/h winds."

"Area of land burnt in Australia compared to the size of Ireland."

"Australia is one of the first countries to ring in 2020, here is what we are waking up to on the last day of this decade. Happy New Year."

An eery backdrop behind a relatively ordinary scene.

"Yesterday was one crazy day. I helped defend friends' property from the fire at Nth Durras."

The beach remains the last place to go for some. Want to learn more about these bushfires? Scroll on for the story of one hero amidst the tragedy.