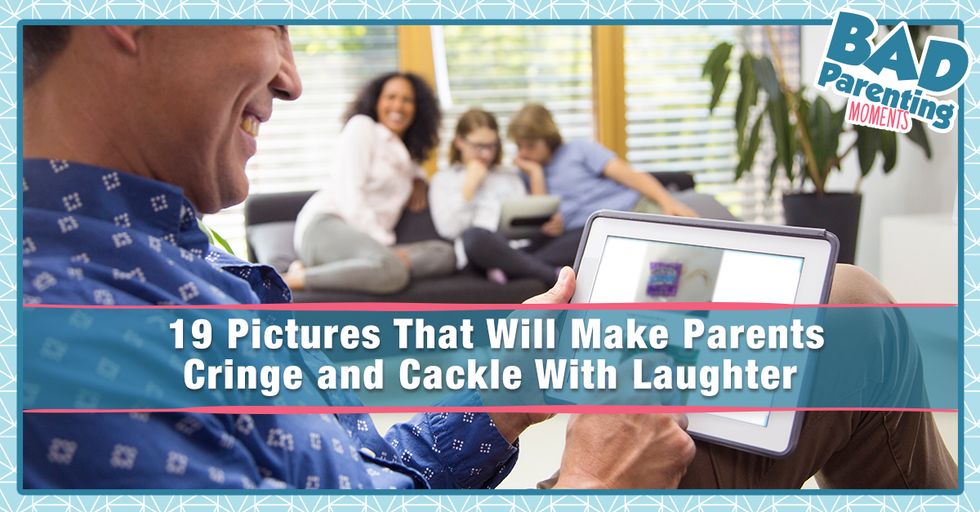 19 Pictures That Will Make Parents Cringe and Cackle With Laughter

As with any job, being a parent comes with both cons and benefits.

The hours are brutal, the messes are incalculable, and the sleep is...well, basically nonexistent.

But the laughter? It's basically infinite.

Whether you're laughing with your child or good-naturedly laughing at the many situations they get themselves into, there's plenty to be happy about when it comes to being a parent. We bet you can't help but laugh at these posts from fellow parents, too.

Listen up, kids: You might get away with messing with your mom. But you can never mess with Mother Nature.

Kids in the pantry? You're gonna have a bad time.

Look on the bright side. Now you can introduce a game of "Vegetable Roulette" at dinnertime! Is it green beans or Spaghettios? Place your bets!

You turn around for a fraction of a second and somehow, your kids find their way to the top of a display shelf. (Don't worry; this kiddo was safely brought back to ground level!)

If you give a kid a power washer...

Never underestimate your kids' ability to turn a simple task into a way to drive you nuts. It's kinda their specialty. This kid featured in this next picture definitely means well!

This is why it's probably a good idea to proofread your kid's assignments. At the very least, it should save you from having to explain a note like this to the teacher.

Well played, Joshua. But let's not forget: Your birthday wouldn't be possible without your mom. Do you really wanna play this game?

What are they teaching these kids?!

Ohhhh. Never mind. We were looking at this craft project upside-down.

We kinda wish every school would do this.

Here's a little secret: Nobody likes fundraisers. Not the kids. Not the parents. Not the PTA. Not the coworkers you're asking to buy cookie dough. A lot of hassle could be avoided if all schools followed suit and sent a note home like this one.

Kids are getting a little too clever.

If you ever ground your kids from the Internet, you may want to make sure they're not trying to buddy up to your neighbors. Kids are wily. If there's a way around your ruling, they will find it. This next kid is actually kind of our hero.

He went down the whole row.

This kid is going places. We can't say exactly where he's going. But definitely somewhere.

This is what happens when your child realizes the "grownup" meals don't come with free ice cream. We know how you feel, kid.

Been there. Done that.

You can almost hear what's going on in this picture. It's almost as though kids save their wildest behavior for literally any time you're out in public or trying to get somewhere.

This pup survived the sleepover:

Hey, you can't control everything. Sometimes the dog's tail is gonna get braided. That's just a part of life with kids.

Everyone knows that a plastic shark and LEGO toast are an important part of a balanced Father's Day breakfast. This next photo shows a father's solution to an age-old problem.

Sick of your kids losing the remotes?

Problem solved! All you need is some zip ties and a block of wood. Sure, it's not pretty, but it's effective.

This kid has life figured out.

Hey, he's not hurting anyone or destroying anything. We're in full support of this genius.

You knew your kid wouldn't eat the crust. Turns out they won't eat the UNcrust, either.

A story for the ages.

What do you do after you've written the best book ever? Write the sequel. Obviously.

Here's another kid who's ahead of their time:

They're already making better choices! Work smarter, not harder. Share this with a fellow parent!