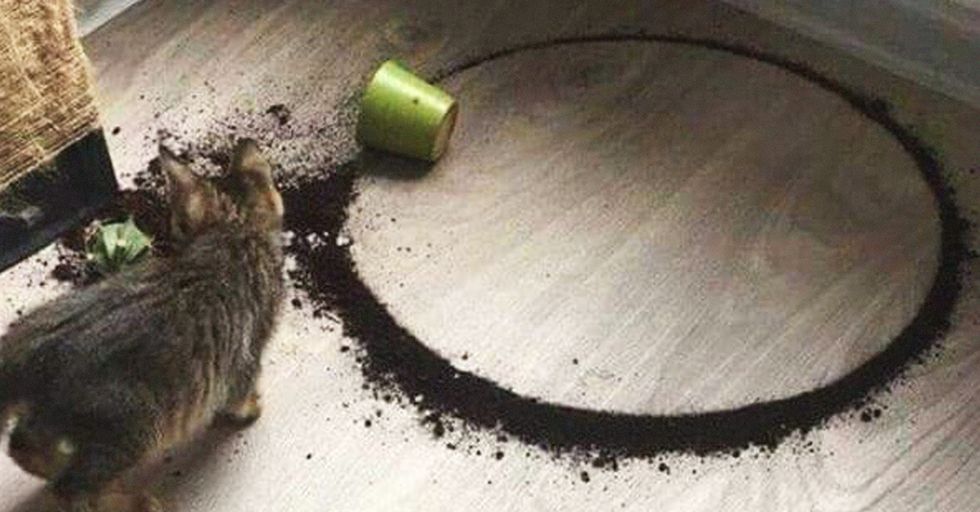 19 Pictures So Bizarre You Won't Be Able to Forget Them

I think it was Madonna who expertly sang, "Life is a mystery."

And oh boy, was she right!

The following pictures will make you do a double take.

They are strange. They are bizarre. They will make you cock your head to the side like a dog who just heard a weird noise. You're welcome.

OK honestly, I've had this, and it works way better than you think it's going to. It's solid when you put it on the burger, but then the warm, juicy meat kind of melts it without making the bun soggy. It's an amazing invention.

Either this is a tragic misquote, and misspelling or this person is a really big fan of the SNL parody starring Will Forte and Jason Sudeikis.

Don't worry guys. This g-string is made out of genuine possum fur. I know you were worried. The next one would frighten the crap out of you if you were a surgery patient.

Who thought this was a good idea? This is not a good idea! Could you imagine waking up to see this?! You'd think you were in The Twilight Zone.

Creature from the deep

Have you ever seen the bottom of a stingray before?! Isn't it simultaneously the cutest and most disturbing thing you've ever seen in your life?

Wait...is that a projection of the bigger pup? Maybe a forced perspective shot of twins? This pup is a true mini-me.

I love porgs just as much as the next person. I think they're adorable. But even this porg doesn't look happy to be a teapot.

Apparently, this potted plant fell and naturally spun into this position, spilling the dirt in a perfect circle. There are only two explanations for this: aliens or demons.

This poster wrote, "Over the last two weeks, someone in my neighborhood has been leaving socks on my windshield. It took me a minute to realize it wasn't some sort of odd hazing ritual." They're just setting this Dobby car free!

Why? I guess it could be useful for people who can't visit the house in real life, but making the Anne Frank House a virtual reality experience makes it seem like some sort of game.

"Wow, Dad, you should totally go on the show. You'd kill it." The next one is super cute and also super trippy.

If you can't tell what this is, it's an adorable curled-up sleeping cat whose markings just so happen to perfectly line up when she's in that position!

This is hilarious. Do you think this parent really didn't know this is a PEZ candy?

Well, that's an oddly perfectly positioned photo if I ever saw one. Although I doubt the owner of that car would find it very funny.

There are not enough "NO THANK YOUS" in the world for this. NO THANK YOU times infinity.

You know, glitter jewels for your butt! They're perfect if you're not planning to sit down for hours or if you want to go to the beach and get the weirdest tan of your life. Share this with someone who could use a laugh!