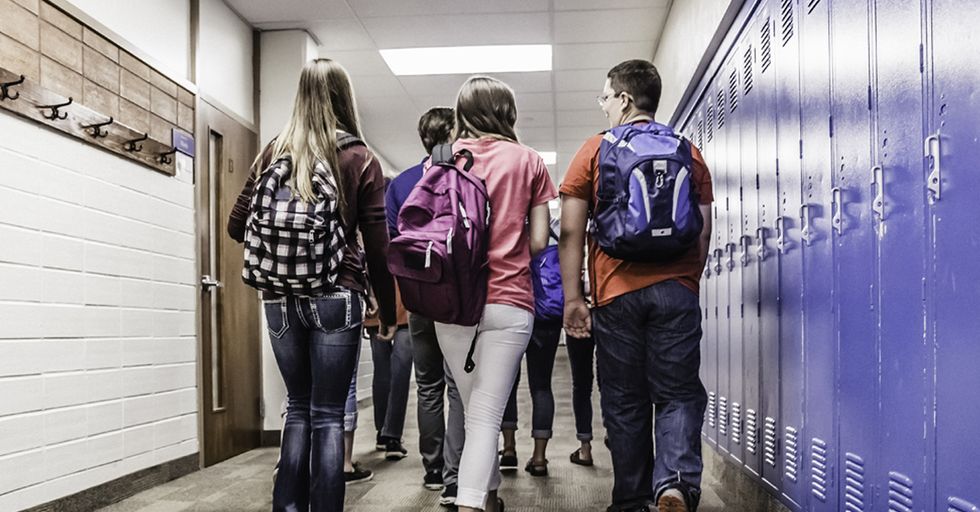 Ahhh, high school. It was the best of times, it was the worst of times.

Who could forget all the wonderful times we all had going through high school?

Need me to jog your memory? No problem. (For best results, please play Vitamin's C "Graduation (Friends Forever)" in another browser window while you read.)

First of all, remember this calculator?

Depending on what math class you were in, you may have been required to buy your own. But admit it: You felt kinda cool having such a fancy device in your backpack. Also, you probably had a couple games installed on it which you would try to sneakily play during class.

Were you in band?

If so, you probably had to sell boxes of these candy bars for your fundraiser. If you weren't in band, you probably spent all of your dollars on them. They were delicious!

Remember meticulously filling out scantron sheets for an exam?

You'd get three C's in a row and start to wonder whether you had messed up or your teacher was just messing with you. And if you decided to change your answer, you'd better hope you could erase the entire mark!

Including making a custom cover for your textbooks. Of course, if you were really fancy, you didn't use a grocery bag...

You used Book Sox instead.

That's right. All the cool kids had tie-dyed textbooks.

And as soon as it happened, there was no going back. Your three-ring binder became the bane of your existence.

Back in my day, we had to use these cards to check books out from the library.

And finding those books in the first place was basically a scavenger hunt through the card catalog. I miss some things from high school. I do not miss that.

You could expect your school photo to have this awesome background:

But you'll never forget the disappointment you felt upon learning that they didn't actually bring lasers to school for picture day. What a bummer.

You probably remember exactly how these felt rolling around in your hand:

Popping your friend's mouse ball out was the best prank to pull. And now for the reason you always looked forward to Fridays...

It didn't taste that good, but it was still the highlight of your week (assuming you got hot lunch). Cheesy breadsticks were also your jam.

Waking up on winter days to watch the school closures:

And then either jumping for joy when your school was listed... ...Or groaning and getting ready to brave the freezing cold weather.

A lot of high schools had Fruitopia vending machines! The lucky ones.

You saw this on the best days ever:

Were you technically a little old for Bill Nye in high school? Sure, but you weren't complaining.

Getting home and feeling like a king when you saw this waiting for you:

Remember when you had to wait to get home in order to check your social media?! What a world we lived in. And who could forget the "Top 8" drama of MySpace? Of course, that wasn't the only thing you did on the computer...

You know, to talk with your friends. Whom you had literally just seen 30 minutes ago.

These desks were in every single classroom:

And there were always one or two left-handed versions at the back of the room. I'm pretty sure I wouldn't be able to maneuver myself into one of those chairs now.

Everything was written in pencil.

Which meant that you had to use one of these things pretty much every day. (Unless you had a mechanical pencil!)

If you rode the bus in high school, you can smell it just from looking at this picture:

The vinyl seats. The smoky exhaust. The unmistakable mixture of AXE body spray and B.O.

And your teacher probably made this face at least once a week: