And of course, who could forget Meghan Markle... | 22 Words 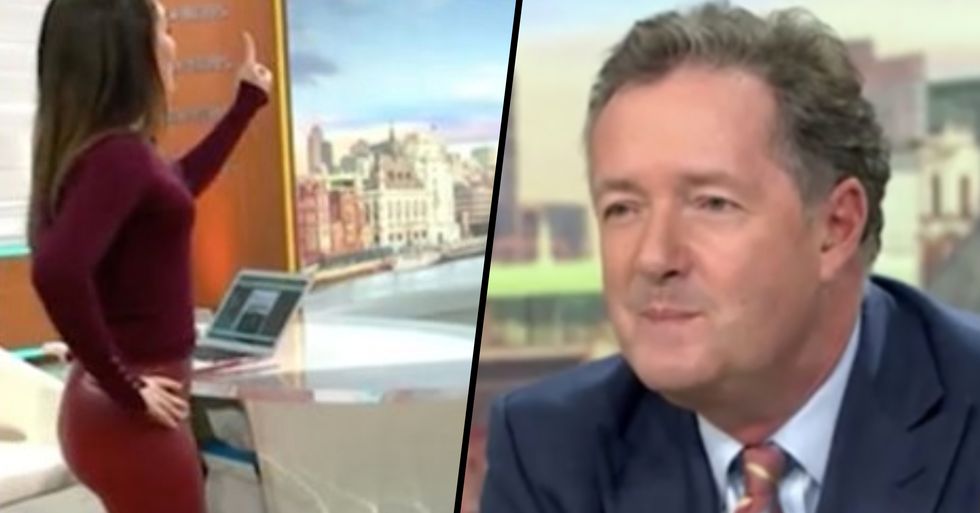 It's very rare when Piers Morgan isn't making headlines in the U.K for his bold and often outrageous comments.

But he is now making headlines globally for his most recent comments about a weather reporter live on air.

Piers has blamed Meghan for "destroying" the Royal Family...

And he has made his opinion of her very well known to the British public.

Piers hasn't exactly been praised for his opinions...

And his most recent comments have caused public outrage.

On Tuesday morning, Piers was hosting his usual segment on Good Morning Britain...

After discussing climate change, Piers decided to draw attention to weather girl Laura Tobin's trousers, that were made of a leather-looking material.

Laura's outfit isn't at all inappropriate...

And we must say, she looks pretty great considering its 6 am!

Piers immediately attacked the poor woman when he noticed her clothing...

"Can we talk about your hot pants for a moment because you can’t wear something like that and not expect the public…," Piers began before adding, "They’re not just a pair of trousers, they’re skin-tight leather hot pants I’ve seen in many a year and you’ve paraded them for your 7 day…"

Luckily, co-host Susanna Reid stuck up for the meteorologist...

"She was doing her job as presenting the weather," she said, to which Piers replied with, "If you wear skin-tight leather trousers, you’re going to get people going... wow."

The conversation continued well into the show...

Piers defended himself by saying, "All of you wear clothes, you post them on your Instagram... They are fabulous trousers, I’ve noticed them, I don’t see why I shouldn’t be able to do that?"

Laura remained dignified throughout the little debate, but Susanna and Piers turned it into an argument...

"Saying they’re hot and sexualizing them is just one of those examples of when you’ve just gone a little bit too far," Susanna said to Piers in Laura's defense. "They’re hot trousers," Piers continued, "They’re not regular trousers. Most weather girls don’t wear hot leather trousers to do the weather, they don’t."

Audiences were not pleased with Piers' persisting comments...

And people began branding the outspoken journalist as "sexist" and "disgusting."

Many felt his behavior was sexually harassing...

I can’t believe @piersmorgan is getting away with low grade sexual@harassment on live TV!!! Just stop talking about… https://t.co/hBliX27WBe
— Olivia Palmer (@Olivia Palmer)1578985178.0

And we must say, what on earth do her trousers have to do with presenting the news? They aren't relevant at all, and how she chooses to dress does not define her career.

Piers eventually spoke out through the backlash...

Responding to a tweet that has now been deleted, he wrote, "If you wear tight leather trousers to do the weather, you’re probably hoping people will notice... FYI," suggesting that Laura picked her trousers for a deliberate reason.