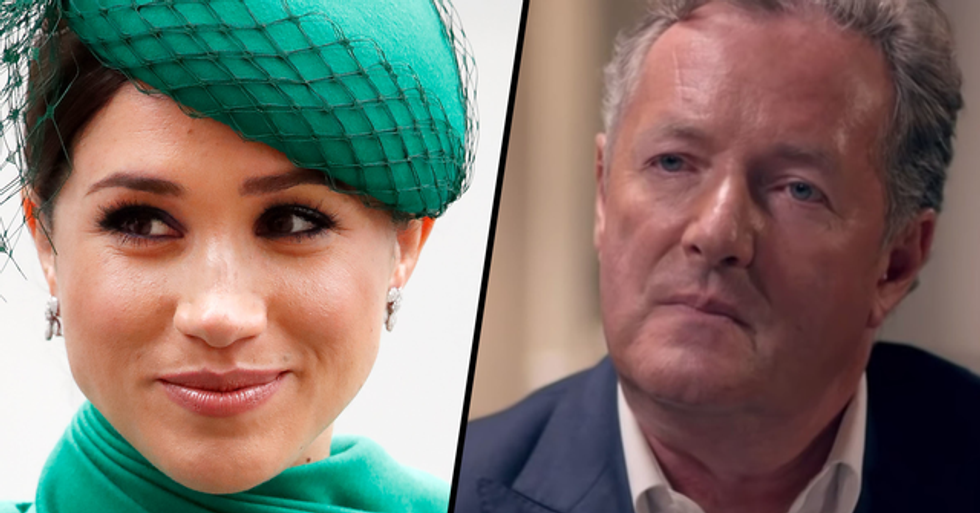 The British journalist and television host, Piers Morgan, has never been Meghan Markle's biggest fan and doesn't hold back when expressing his disapproval of her move into the royal family (does this have anything to do with her ghosting you, Piers?).

Anyway, Piers has gone off on yet another huge rant about Meghan, and this time it's about her most recent public appearance.

Keep scrolling for the full story, and to watch his hate-fuelled spiel for yourself...

Yeah - Meghan is one inspiring woman.

But not everyone is too impressed with the Duchess.

British journalist and TV host, Piers Morgan, has always made his thoughts on Meghan quite clear.

Now, Piers was actually friends with Meghan once upon a time.

But, once she stopped replying to his calls...

Piers grew to become rather bitter and has continuously blasted Meghan, both in his columns and live on air on his breakfast show, Good Morning Britain.

He's brandished her as a "ruthless status seeker" in the past...

And has continuously blamed her for "tearing apart the royal family."

And this week, he has erupted again.

And it was all triggered by the recent photographs of Meghan and Harry.

And some pretty stunning photos emerged, with Meghan radiating with happiness.

But this annoyed Piers...

Who labeled Meghan as "looking like the Cheshire Cat."

He was discussing their role in the Commonwealth Service in Westminster Abbey, which was their final appearance as senior members of the royal family.

He noted the tension between Harry and William (which is apparently Meghan's fault...), saying: "What would Diana think? Her boys are barely able to speak to one another."

He then argued that people should be asking if the Queen is okay, not if Meghan is okay...

Because Meghan is apparently off to become a superstar.

"This obsession we have with, are Meghan and Harry ok - they’re fine - they’re going off to Hollywood to become superstars. I bet the Queen’s not been okay. Her grandsons are at war."

He said that Meghan has got "everything she wanted."

"People ask, 'is poor Meghan okay?' but she looks fine to me. She’s spent the last few days looking like a Cheshire cat. She’s got everything she wanted."

He rounded off by saying her criticism in the papers was completely justified...

And comparing her to Henry the 8th...

It's controversial, to say the least.

You can watch Piers' full rant here. Though be warned, it may make you pull your hair out in despair...