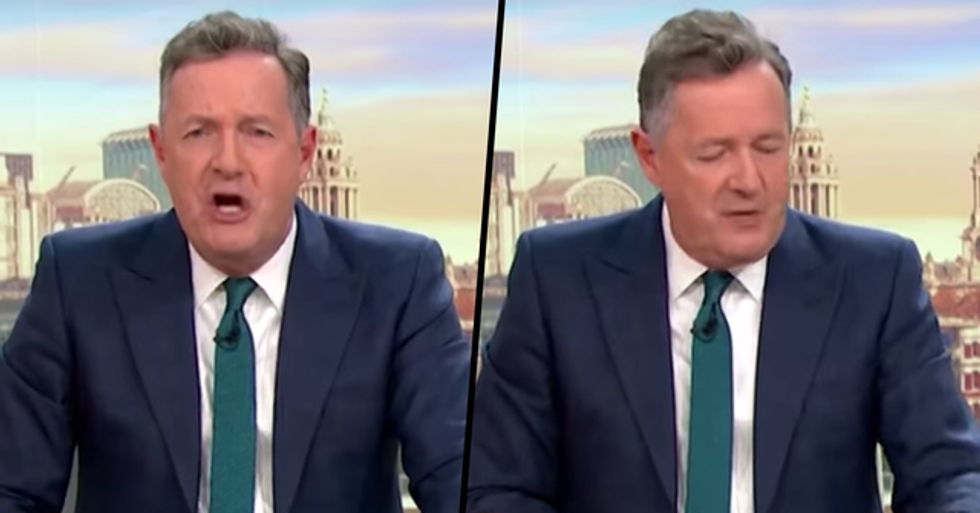 Controversial TV host, Piers Morgan, has caused shock and outrage for a "racially insensitive" slur he made on live television, thus sparking thousands of complaints in the process.

Keep scrolling for the full story, and to watch the shocking moment for yourself...

Piers Morgan wears his heart on his sleeve.

Literally. The British TV presenter constantly has to have his opinion heard.

Whether it's about politics, women's issues, or any other thing that doesn't concern him...

He usually has something to say about it.

As you would expect, Piers' Twitter account is well and truly active; this seems to be the place in which he aims to stir up as much controversy as possible.

But he's also spent a lot of time here in the States.

Piers Morgan remains the only journalist who was able to carry out interviews with the President during his visits to the UK. Say what you will about him, but he has achieved some admirable things. Though being buddies with Trump may give you an advantage in this situation...

Piers has blamed Meghan for "destroying" the royal family...

And he has made his opinion of her very well known to the British public. He even leaked a private message that Meghan sent to him. Find out more at the end...

All in all, Piers hasn't exactly been praised for his opinions.

But, earlier this year, the host came under much hotter fire than usual.

It's usually a specific person that falls victim to Piers' tantrums.

But in January, the journalist seems to have managed to offend an entire nation.

In fact, his comments were so bad that viewers are calling for him to be sacked from Good Morning Britain.

The fifty-four-year-old had been speaking about the Queen's eldest grandson, Peter Phillips, appearing in a TV advert for state milk in China.

And while discussing the advert with co-host, Susanna Reid, the presenter went on to make some pretty eye-opening gestures.

He appeared to mock the Chinese language.

"At the next royal event, can you imagine Christmas at Sandringham is like - 'I'm sorry your majesty, but I only drink [sic] yang yank yong ying ming milk," he quipped. And it didn't end there...

The clip of the advert was played again, which of course, sparked another unwarranted comment from Piers...

"Ok then - ching chang chong, ok I got it," he said. Susanna then awkwardly remarked: "For god's sake... taking the mick out of languages is rather 1970s."

You can watch his remark here.

Even for Piers' standards, this is pretty grotesque.

After watching, viewers were less than impressed.

People can't believe he still has a platform to voice his outrageous comments. Although, he does bring the show a heck of a lot of viewers and attention... So, in some senses, it isn't too hard to see why.

Another viewer labeled him a "dinosaur" who "needs to learn some new rules."

And some want him sacked...

Safe to say, people were outraged by his comments.

He clearly doesn't know when to draw the line.

And he even attempted to justify himself.

He responded to the backlash in the only way he knows how.

Which is denying any wrong-doing, of course.

Surprisingly, he didn't use the word "snowflake" this time... But it's still painful to see this man continuously justify his behavior.

In a statement, they explained: "It was legitimate for Piers Morgan to question Peter Phillips' decision to appear in an advertisement for Chinese state milk and to use satire and ridicule in doing so."

They recognized that his actions could be classed as racist.

The statement continued: "However, part of Piers Morgan's mockery included three attempts to mimic the Chinese language, including using the phrase 'ching chang'. As ITV has itself acknowledged, this phrase is recognized as a racist trope aimed specifically at people of Chinese heritage.

But OFCOM acknowledged that Piers' cohost, Susanna, intervened when he was making the remarks...

And attempted to stop him. "We accepted this was an attempt by Susanna Reid to point out that some viewers would find his imitation offensive."

Therefore, they have decided to not take the matter any further.

"Having carefully considered the context within which the comments were broadcast and the action taken by ITV, including discussing these complaints with Piers Morgan and making a public apology, Ofcom concluded overall that this program did not warrant further investigation under rule 2.3 of the Code." Your good luck strikes again, Piers! To hear more about his ongoing grudge against Meghan Markle, keep scrolling...