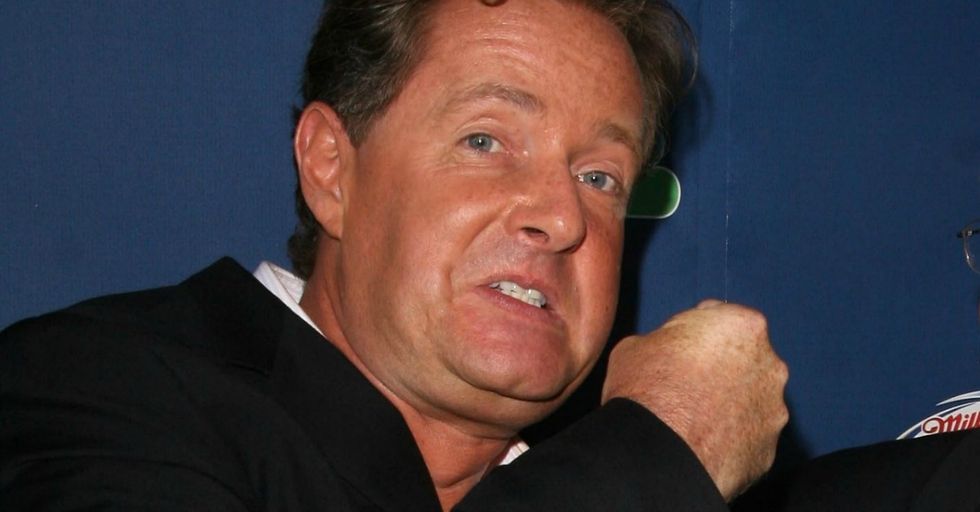 British journalist and TV personality, Piers Morgan, has some strong opinions. Normally, that wouldn't be a bad thing, but on September 4th, the outspoken Morgan tweeted something that has since landed him in hot water and even started a new hashtag.

Strangely, instead of backing down from the controversy, Morgan leaned into the Internet's ire and reveled in the backlash.

So, what did he say that caused this uproar?

It's getting to the point that whenever Piers Morgan shows up in the news, we immediately start popping some popcorn to enjoy during the ensuing chaos.

As you may know, Morgan is a British journalist and television personality who has found himself embroiled in more controversies than he probably cares to count. He essentially makes a living by opening his mouth and inserting his foot into it. (Psst! Now's the perfect time to start that popcorn.)

Let's take a look at his recent sojourns into the land of internet drama.

Earlier this year, Morgan complained about "rabid feminists" and then tweeted that he was planning a "Men's March" in response to the Women's March.

In February, he waltzed right into a hilarious trap set for him by none other than J.K. Rowling.

She tweeted out a clip about teaching children to read, to be inspired, and to be creative. For no apparent reason, Morgan responded viciously to the tweet, saying she was full of "humblebrag BS." Here's the thing, though: Morgan was the person who had written the initial compliment. Whoops! Well, that's awkward.

Morgan even made this adorable little girl cry on 'Britain's Got Talent.'

Now, we're not saying this little girl is the best dancer on the face of the planet, but really, Piers?! He managed to make Simon Cowell look like a gentle, lovable teddy bear. If that doesn't prove that Morgan is sometimes the absolute pits, then nothing does.

Over the weekend, though, Piers Morgan reached a hilarious new low.

Morgan took to Twitter to show how 'manly' he is.

What makes him so manly, you ask? He has three broken ribs, and he's going into work. Wait, that's it?

Yep. You read that right. Now, obviously, broken bones suck. And working while dealing with pain of any sort also super sucks. But is it manly?! The women of Twitter thought not.

Women from all over the world started replying to Morgan's tweet calling out his laughable use of the phrase 'manning up.'

Like this woman, who gave birth without the use of any drugs — twice! And then helped the doctors open a packet of stitches! Do you suppose Morgan would refer to this as "manning up"?

Broken ribs are nothing to sneeze at, but what about a broken neck?

And collarbones. For 14 years. Is this woman man enough to earn Morgan's respect?

Here's another 'special snowflake' who had a broken rib.

She couldn't be bothered to host a TV show, though. Instead, she ran a half marathon. Quickly, the hashtag #WomanUp started trending in response to Morgan's misguided "manning up" tweet with stories of women proving that bravery and strength have absolutely nothing to do with someone's sex. One of the best responses came from someone Morgan sees on an almost daily basis...

As such, she's no stranger to Morgan's bizarre personality. But this "man up" nonsense was apparently taking things just a bit too far.

Hey, Piers. Sorry to hear about those broken ribs. Do you think you can man up through this sick burn, too? Can we all share a quick moment of silence for this queen of comebacks who has to woman up every time she goes into her workplace?

Look, everyone has to deal with bad circumstances at one point or another. That's not "manning up." It's just being a human. It seems like Morgan could use a little practice "humanning up."